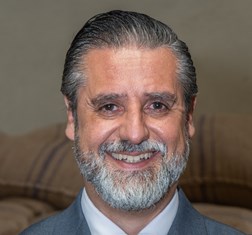 With a degree in Business Administration and Management from the Portuguese Catholic University of Porto, he developed his career within the FMCG in Portugal (Unicer; Sogrape; Sociedade Central de Cervejas) and Angola (Refriango and Castel Group). His experience includes leading the sales and trade marketing area of the Companies he has worked for, leading teams of direct sales, distributors, wholesalers, and modern distribution in its Cash’n’Carry and Hyper and Supermarkets components. In Angola it also developed Auto Sales teams in informal markets. He is currently General Director of Angonabeiro—an Angolan company belonging to the Nabeiro Group—operating mainly in the so-called “coffee line“, but also in the representation of consumer goods brands well known to Angolan Consumers.

Share on:
“Up until 1975, Angola was one of the top five coffee producers in the world, and now we are not even in the top 10.“

Grupo Nabeiro, founded in 1961, first established in Angola in 2001 with the creation of Angonabeiro. How has the evolution and trajectory of the group been since its creation?

Grupo Nabeiro started as a small business, roasting 30kg of coffee a day, though its vision was to turn the business into something bigger and better. The model of the company was and still is that every customer is a friend. It became one of the biggest companies in Portugal and is still in its original village in Campo Maior. Delta Cafés, the coffee brand, has transformed into a coffee enterprise, developing machines and new ways to make blends into our capsules, the Delta Q brand. In the 1980s, it started its foreign expansion, establishing in Spain in 1986. Today, Grupo Nabeiro’s coffee brands are present in more than 35 countries around the world. The Angolan government called on Angonabeiro in 1998 to revive the local coffee business. Almost all of the coffee farms in Angola were abandoned and neglected because of the civil war. Our mission was based on the management of the Liangol, the factory were we are now, and its modernization, given that it had been out of operation since 1984. Up until 1975, Angola was one of the top five coffee producers in the world, and now we are not even in the top 10. Angonabeiro first brought Delta Cafés into the market and created a new coffee brand, because we understood that it is not possible to build a sector without bringing value to that sector. In 2001 Angonabeiro started up industrial operations, and inaugurated Ginga Roasting plant (former Liangol). In the same year Ginga Café (our new 100% Angolan coffee brand) began to be sold. We started exporting roasted Ginga in 2021. Our first focuses are set on Portugal, France and Switzerland. The objective is for Ginga brand to be widely recognized as an Angolan brand.

Several strategic partnerships have been established with local companies in Angola. What is the importance of collaborating with local partners in the market?

Our commitment is to the soil and the people, so we have to establish friendships with farmers. They are small and need our help. We provide farmers with a profitable, secure way to earn income by buying their coffee and putting the money upfront, helping communities, and contributing with the proper infrastructure. We also lend them bags to store the coffee for packaging. We peel and clean the grains for some farmers. We are present in Angola for the long run as their partners.

Angonabeiro has made several investments to bring development and well-being to the people. Can you provide more details about those social and environmental projects in Angola?

People in Angola need employment, and our ongoing projects generate self-employment. If someone wants to sell coffee on the street, we provide them with a hot water container, sell them the soluble coffee at a reasonable price, and a uniform to be presentable, and all of this with in compliance with best health and safety standards. The program is called Ginga Awakens. Besides, this month we launched a program to help the hotel, restaurant, and catering (Horeca) business to get back on their feet after almost a year of distress caused by covid-19, on this sector. They are now reopening, and we brought in a program from our Group, in Portugal, called Coffee Heroes that allows them to have access to a free package of products from our extensive portfolio, as we are distributors of brands that Horeca businesses need, like olive oil, olives, pasta, butter cookies, water, milk, wine and other products. When they buy coffee from us, we deliver them other products for free. I am pleased to report that in the first two weeks of the program, all the major customers have picked up the incentive, which means it is positive. Next. we want to next on small companies in Angola.

Angola was once the third-largest exporter of coffee. What is your vision on the future of Angolan coffee?

We have to change the way consumers look at coffee. We are starting with a campaign called Coffee — The new Angolan beat to highlight the benefits of coffee consumption. Coffee has antioxidants that prevent you from absorbing too much sugar, it prevents cardiovascular diseases because it naturally helps cleaning your blood, and it keeps you alert and focused. We need to inform the public about these benefits, among many others, because even though Angola was a big coffee producer in the past, there was no culture of consuming it internally. Our vision is to change the mindset of the Angolan consumer. The second part of our vision for the future is to help increase the quality of coffee and help farmers produce more and better coffee. INCA (Angolan National Institute of Coffee) is looking in the right direction in supporting farmers, and the public authorities should be funneling investments toward this sector, to strengthen the value chain, and improve and ignite other areas of the economy.

What are your goals for the coming year?

We aim to keep pushing the agricultural side of the economy to improve. We also want a full range of coffee products in Angola. We have Delta Q brand, which has invested heavily in creating new ways of consuming coffee, and we intend to bring that to Angola. Finally, we must sell Angola to the world through our 100% Angolan brand, Ginga.