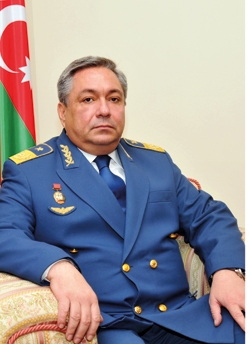 Not on the Siding

Arif Askerov graduated from the Moscow Order of Lenin and the Order of the Red Banner Institute of Railway Transport, specializing in Economy and Railway Management. After university he became the Inspector General of the Finance Division at Azerbaijan Railways, before becoming the Deputy Head of Accounting and Financial Services in 1989. He mainly stayed in the Financial Department until 2004 as the Deputy Chief Financial Officer, Chief of Financial and Information Services, and Chief Financial Officer. In 2003, he was promoted to the Head of the Azerbaijan Railways JSC, and became Chairman in 2009.

Share on:
What is the history of Azerbaijan Railways and what has your role been in its development? The construction and the subsequent development of the first railway in Azerbaijan were associated […]

What is the history of Azerbaijan Railways and what has your role been in its development?

The construction and the subsequent development of the first railway in Azerbaijan were associated with the transportation of oil. For many years, oil was primitively transported in barrels, which were placed on carts and carried by caravans. The industrial workers of Baku were interested in building the railway and pipelines to be able to increase their profits from selling oil. Thus, oil producers and the managers of oil refineries had repeatedly asked the Committee of Ministers for the construction of the railway. A meeting of the Committee of Ministers attended by Czar Alexander II on June 16, 1878 approved a project on the construction of a railway for the oil industry. The construction of a 27-kilometer-long railway was entrusted to the “Poti-Tbilisi” railway association. The construction of the railway began in 1878 and was completed in 1879. On December 17, 1879, the Balakhani, Surakhani, and Sabunchu railway stations started receiving goods for railway transportation. The official opening ceremony of the railway was held on January 20, 1880, as oil was transported in tankers for the first time in the world. Since that historic date, Azerbaijan’s railways have developed in parallel with the growing demand for cargo transportation. At present, the total length of Azerbaijan’s rail network is 2,910.1 kilometers, including the operational length of 2,079.3 kilometers. The latter includes an 802.3-kilometer, two-way section. A section of 1,241.4 kilometers of the operational length, or 59.7%, is electrified, while 837.9 kilometers, or 40.3%, is intended for diesel-powered locomotives. A total of 1,527.7 kilometers are provided with automatic signaling equipment. It is also worth mentioning that the first electric railway in the USSR was commissioned on July 26, 1926, when electric trains started moving between Sabunchu and Surakhani, the well-known oil districts of the Absheron Peninsula. Two out of 176 railway stations of the Azerbaijan Railways, Bilajari and H.Z. Tagiyev, are fully automated distributing stations. A dozen stations have container yards equipped with all the necessary machinery and mechanisms, while three others (Keshla, Ganja, and Khirdalan) carry out operations involving large-tonnage containers. Whereas in the first 10 years since being established the railways were closely associated with the development of oil production and refining, beginning from the latter half of the 20th century the railways started to serve the growing needs of the national economy and were extensively used for the transit of goods to neighboring countries. The relatively recent history of Azerbaijan was a period of difficult ordeals for both the railways and the country as a whole. After the break-up of the Soviet Union in the 1990s, Azerbaijan’s railways entered a period of recession, the economic links with neighboring countries were interrupted, cargo and passenger transportation were reduced to the minimal level, and transportation in some directions was completely interrupted. As a result of this, the railway infrastructure became unserviceable, qualified professionals had to seek employment in other areas, and the republic’s railways were in disarray. The fact that Azerbaijan was dragged into the conflict around Nagorno-Karabakh further exacerbated the situation. As a result of this aggression, which has led to the occupation of 20% of Azerbaijan’s territory by Armenian armed units and the emergence of more than 1 million Azerbaijani refugees, the Azerbaijan’s railways sustained serious damage. A section of more than 240 kilometers in length was exposed to Armenian aggression. Due to the suspension of railway traffic in the Mehri-Karchivan direction, the Nakhchivan Autonomous Republic was cut off from the rest of the republic and has been bearing the brunt of a blockade for over 20 years. Although the entire railway infrastructure and rolling stock in the said territories have been completely destroyed, the railway managed to survive such a difficult period and succeeded in meeting the demand for transportation. On June 15, 1993, the national leader of the Azerbaijani people Heydar Aliyev returned to power following the persistent demands of the people, and he managed to stem the economic decline. This was a turning point in the development of the railways, and the start of a period of revival for the country’s steel trunk. Specific measures were taken in those years to organize railway passenger transportation both in the country and to neighboring republics at a high level. The railway department started a major campaign to renovate passenger carriages using its own resources. Shortly afterward, high-quality passenger carriages meeting international requirements were commissioned. The commissioning of the “Express” passenger carriages with soft seats for the first time in the history of Azerbaijani railways and in the CIS was received very well by the country’s population. The economic relations of Azerbaijan Railways with neighboring countries were restored, paving the way for the reopening of passenger and cargo routes to the Russian cities of Moscow, St. Petersburg, Rostov, Tyumen, Makhachkala, the Ukrainian cities Kiev and Kharkov, the Georgian capital Tbilisi, and the city of Tabriz in the Islamic Republic of Iran. The current President of Azerbaijan, Ilham Aliyev, has signed a number of decisions to bring the railway transport system into line with international standards. The key objectives of the programs have been to meet the needs of the growing population and economic demand for railway services, to address the government’s defense needs, to increase Azerbaijan’s transit potential, to improve the quality of railway transport, to reduce the cost of passenger and cargo transportation, to contribute to the effective operation of the transport system in general, and to facilitate the overall socioeconomic development of the country. Since I assumed leadership of the railways in 2003, this sector has experienced drastic reforms and structural changes, the volume of passenger and cargo transportation has significantly increased, and specific measures have been taken to improve the safety of railway transportation. In an effort to execute the State Program, Azerbaijan Railways has purchased maintenance machines and equipment, set up new production lines, and introduced state-of-the-art technology.

How has the construction of the Baku-Tbilisi-Kars (BTK) railway cemented Azerbaijan’s position as a regional railway hub?

The BTK railway project will provide a transport link from the Caspian and Central Asian regions to Europe, facilitate passenger and cargo access from Azerbaijan, Georgia, and Turkey to European countries, and eventually speed up the process of Azerbaijan’s integration into Europe. In addition to deriving economic dividends from the increased railway traffic, Azerbaijan will become a transit hub and significantly strengthen its regional standing. Azerbaijan’s participation in any project that can bring stability, prosperity, and economic benefit to the region, including the BTK railway line, is highly important because it will be possible to use this transport artery to send and receive goods on an area stretching from China to Europe. As President of the Republic of Azerbaijan Ilham Aliyev said at the signing ceremony of the agreement on the construction of the BTK railway in Tbilisi on February 7, 2007, “the implementation of this project will bring us even closer together, step up regional cooperation, bring stability and prosperity to the region, and serve the interests of our countries and peoples.”

What percentage of the population travels by rail as opposed to other modes of transport?

How many passengers did Azerbaijan Railways carry in 2012?

A total of 2.61 million passengers traveled from railway stations in 2012. Passenger transportation constituted 2.7 million people, including 305,700 on international routes.

What are the medium-term plans for Azerbaijan Railways?

In the next five to six years, Azerbaijan Railways plans to completely upgrade its infrastructure, renew the existing equipment, switch the Baku-Boyuk Kasik direction to 27.5 kV AC and subsequently to the micro-processor signaling system, create an automated signaling system for cargo and passenger transport, purchase new passenger carriages, wagons and one- and two-system locomotives operating on AC, increase the traveling speed of trains to 140 kilometers per hour, meet the growing population and economic demand for railway transport services, address the government’s defense needs, increase Azerbaijan’s transit potential, reduce the cost of passenger and cargo transportation, ensure the effective and viable operation of railways, facilitate our contribution to the socioeconomic development of the country, and secure a place among the railway administrations of the world’s developed countries.