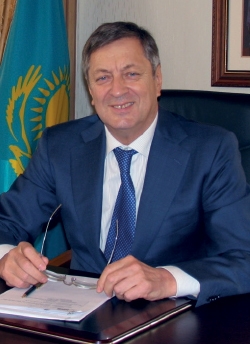 Vladimir Shkolnik was born in 1949 and graduated from the Moscow Engineering Physics Institute. He then began his career at the Mangyshlak Atomic Power Complex as an Engineer-Physicist. From 1988 to 1992, he was a Deputy Director of Mangistau Atomic Power Complex, and in 1992 became the Director General of the Kazakhstan Atomic Energy Agency. He then occupied a number of ministerial roles, before becoming Chairman of KazAtomProm in 2009.

Share on:
What is the role of KazAtomProm in promoting scientific R&D in Kazakhstan? We have realized that a scientific base and innovation is of vital importance for a country to become […]

What is the role of KazAtomProm in promoting scientific R&D in Kazakhstan?

We have realized that a scientific base and innovation is of vital importance for a country to become a leader in any industry, especially the nuclear industry. Therefore, science and research are our constant focus. KazAtomProm comprises a number of technological councils, including the Central Technological Board and corresponding councils for every strategically important area: the nuclear fuel cycle, renewable and alternative energy, rare metals and rare earth metals (RM & REM), and chemical technologies. Every council is composed of renowned Kazakhstani scientists. Apart from that, KazAtomProm has joint ventures with the research departments of our partner companies from Japan, France, Canada, Russia, and China. There is an affiliated company, the Institute of High Technologies (IHT), and an innovation support institution, the Kazakhstan Nuclear University. The university was established to provide nuclear industry professionals with training and retraining, with particular interest to innovation and new technologies. This organizational structure has proven efficiency and ensures the leading position of KazAtomProm in the nuclear industry. We aim to increase capitalization by adding up our intangible assets. The company pays special attention to developing new technologies, know-how, and patents. Over the past four years, we have attained more than 100 patents in nuclear technologies.

How can Kazakhstan develop the real potential of the nation regarding its vast resources?

Kazakhstan has abundant natural resources. We have significant explored reserves of ferrous and non-ferrous metals, rare metals, and hydrocarbons, including substantial quantities of natural gas and petroleum deposits. Kazakhstan also has great potential for wind, solar, and hydro-based power. Indeed, the potential exceeds the country’s consumption rates. Kazakhstan ranks second in uranium reserves. And, currently, it ranks second in uranium production in the world after Australia, having outstripped not only Russia, but Canada as well. KazAtomProm also produces tantalum, beryllium, and niobium. There are a few countries in the world with the capacity to produce tantalum and beryllium, and Kazakhstan is among them. Considering resources, I’d like to add that the company’s policy, parallel to government policy, focuses on using the resources as an asset to develop technologies and to create high-tech joint ventures. KazAtomProm is a perfect example of international cooperation. We also collaborate with major research institutions such as Cavendish Laboratory at Cambridge University.

What is the role of KazAtomProm in developing nuclear plants and nuclear energy?

We have five nuclear installations. One of them is a commercial sodium-cooled fast breeder reactor. Since 1999, the reactor has been under decommissioning. There are four experimental nuclear installations. Three of them are located at the Semipalatinsk nuclear test site, and the other one in the Almaty region. We have qualified scientific and technical staff. The government has decided on launching new nuclear power plants, and our personnel will take part in this process.

What is the role of technology and innovation at KazAtomProm, as well as in developing Kazakhstan’s resources?

KazAtomProm is not a research company; we’re an industrial company. We develop only those areas that can be profitable. Therefore, we deal with renewable energy sources, and solar and wind power specifically. It’s worth mentioning that we use mainly our own technologies, which ensure our leading position in the tremendous renewables market. Our production plant for photovoltaic modules will be open for visitors during the World Expo 2017 in Astana. There is also a sports center that is completely powered by green energy.