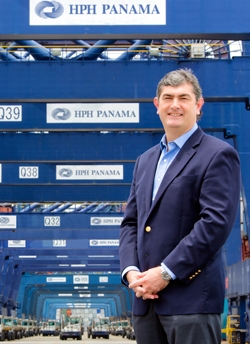 Aitor Ibarreche is a Mechanical and Electrical Engineer graduated from Universidad Iberoamericana, México. Additionally, he holds an MBA and MSPM from the University of Miami. He has over 18 years of experience in the port industry, 13 of which have been with HPH Group, where he began his career in 2001 with HPH México. Since then, he has held several key positions including Executive Director and Commercial Director, where he created, developed, and successfully implemented a great number of commercial projects that are now running with remarkable and effective results. Aside from his successful career, he supports teamwork and enhances the talent and values of his employees and co-workers.

Share on:
"Our operations in Panama, at the Port of Balboa and the Port of Cristobal, are both equally important for us."

In 1997, Panama Ports Company began implementing an infrastructure for new world-trade operations. What other major milestones has the company achieved since entering the market in that year?

We certainly believe that we have done nothing less than open a gateway for container transport on the Pacific side of the Panama Canal. We are also pleased to be the largest container operator in the country, operating more than 3.6 million TEUs in total in 2013, and directly employing over 4,000 people. Over the past 17 years we have invested over $800 million, and in 2014 we are seeing growth rates of 5% to 7%.

What was Hutchison’s impetus for entering the Panamanian market?

The Panama Canal is a prime tool that the shipping industry has to its advantage. The connectivity that it provides for the trans-Pacific and trans-Atlantic trades, connecting the east and west coast of the US, as well as the east and west coast of South and Central America, is a tremendous asset. Most of the world was experiencing port privatization 17 years ago. Hutchison Ports Holding (HPH), the largest container operator in the world, saw the opportunity to invest in Panama since the government was undergoing the privatization process of a port concession, which represented an opportunity to develop container terminals at both ends of the canal. Today, HPH Panama is considered the most important port operator in the country. With operations on both ends of the canal, a major initiative for the company is to further assist in this connectivity in order to develop a more efficient manner for crossing the canal. This, in turn, will reinforce the process to logistically make Panama the best network in the world.

“Our operations in Panama, at the Port of Balboa and the Port of Cristobal, are both equally important for us.”

Panama Ports Company has operations on both sides of the canal, in the ports of Balboa and Cristobal. Which is the most important factor for the company’s activities?

Our operations in Panama, at the Port of Balboa and the Port of Cristobal, are both equally important for us. We envision a system that utilizes diverse modes of transportation, such as barges, trucks, and rail to provide a high-value service structure to fulfil our client’s needs. The Hutchison portfolio is very solid with an extensive history in Asia, where some of the largest ports are located. The company operates 52 ports in over 26 countries and strategic cities such as Rotterdam, Felixstowe, and Barcelona; nonetheless, Panama has two of the most important ports for the group.

What is your future plan for expansion?

We are currently reengineering our container operations, which represent a solid business with room for further development. We will therefore have greater capacities and new licensing ideas, similar to what we have implemented in other countries, such as automation; between the two ports we handle about 3.5 million TEUs per year, but have the capacity to reach a total of 6.5 million TEUs per year. We are also focusing greater efforts in areas such as automobiles, general cargo, agricultural grain, and minerals. We have considerable capacity available in the Atlantic, an area that has not been fully developed, and are currently working on a master plan to do so.

What are the key routes for your operations?

What are your financial expectations for 2014, and which main challenges do you anticipate facing over the next few years?

Containers depend extensively on trade, which we expect to steadily grow. For example, 2009 and 2011 were years where global trade dropped and immediately impacted shipping lines. Survival in the shipping industry at that time depended on reduced costs, which has consequently resulted in the rapid increase of ship sizes over recent years. We invested in cranes that normally would last for 15 years, but were obsolete within five years due to the fact that ship sizes grew so rapidly. Although we do not see triple-E class vessels coming through Panama, we will eventually see larger vessels coming through such as 12,000 to 15,000 TEUs in capacity, which requires additional infrastructure. Approximately 17 years ago when we started, the largest vessel was around 5,000 TEUs, but today are closer to 20,000 TEUs. Meanwhile, the longest ships were less than 200 meters, and have now been replaced by those of 360 meters in length. Ships of that magnitude affect your business strategy and force you to make higher investments.

Panama is now signing numerous free trade agreements (FTAs) like the one signed with Mexico in April, which will make it possible for Panama to participate in the Pacific Alliance. What impact would this union have on your business activities?

For Panama it will undoubtedly be beneficial, although for us it will have a limited benefit. This alliance is designed to increase and foster international trade. For our ports, the majority of business involves transhipments, with only 5% of local cargo going through Panama. Global trade is much more important for our business, where China plays a very important role.

What will be the impact of the Panama Canal expansion at your company?

It will have a major impact because of the increased container (trade) volume. Although our ports already have the capacity to handle vessels of up to 15,000 TEUs, it is very probable that a good amount of these vessels, which nowadays aren’t able to cross the canal, will eventually be able to cross, reducing the amount of containers operated in the ports.

As a leading company in the world, how do you evaluate the level of competition in Panama, given its status as a logistics hub?

In Panama we have around five competitors in the country, which results in quite a competitive market. Additionally, shipping lines can vary transhipment operations very easily.

How do you evaluate the level of port infrastructure in Panama?

The port infrastructure in Panama is excellent. We are prepared to receive vessels of 15,000 TEUs and our ports are equipped with the newest Super Post-Panamax cranes on both sides of the canal. The current capacity in Panama is over 10 million TEUs and the total throughput in the country is approximately 7 million containers.

What are your thoughts on the concept of Panama becoming the “Singapore of the Americas?”

It is an excellent time for Panama to assume the role of logistics hub for the Americas, if not the world. The high demand and traffic of vessels and aircraft gives Panama an incredible opportunity to literally connect your business with any part of the world.