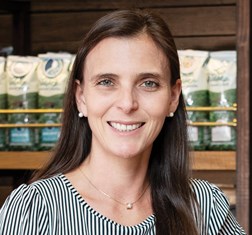 Camila Escobar is an industrial engineer from Los Andes University with an MBA from Harvard Business School. Before joining Procafecol’s team, she was head of the Business Intelligence and Marketing Unit at Belcorp and managed high-impact projects at McKinsey Colombia. She has served as CEO of Procafecol S.A., a company with the license for the Juan Valdez brand, since 2018.

Share on:
Coffee is a way of life, and business, in Colombia. Juan Valdez is positioning itself to make the most of both aspects.

How has Juan Valdez grown as a company and brand nationally and internationally?
Around 1960, there was a strategy to promote Colombian coffee around Juan Valdez. Many people knew they liked premium mild Arabica coffee but did not know it was Colombian. In 2002, when Procafecol was established, the National Federation of Coffee Growers saw the need not only to promote an ingredient but also a product and commercialize a cup of coffee whereby value would be maximized for coffee growers. At the time, producers’ incomes were falling, since the roasters and coffee sellers were keeping the margins. Procafecol is owned by the National Federation of Coffee Growers and 18,000 coffee growers who invested directly in it. At Procafecol, we proudly say we are the only company in the world that is owned by its producers. We do not own the brand Juan Valdez, as this belongs to the National Coffee Fund, and we have the right to use that brand by paying royalties. We developed a strategy to promote the coffee from the beginning to make it visual through important stores, and we had a great deal of visual presence to promote our brand. We have been on a journey for 17 years, where we are now in 13 countries with operational stores and 28 countries in which we commercialize packed coffee.

How has Procafecol improved conditions for Colombian coffee growers?
We contribute to producers’ incomes in three ways. The first is by paying royalties for the use of the brand, and since the brand is theirs, we give back directly to the brand. Second, we pay a premium to producers for export-quality premium coffee that we sell across our channels. The third is an economic contribution through the profits of Procafecol. We have not shared dividends yet, as we are reinvesting in the company. We also create social and environmental value via our actions with several projects including gender, organic, and youth programs in which we strongly recommend, commercialize, and market coffee from these segments. Almost 50% of the municipalities in Colombia produce coffee, and we also buy from them. Our programs not only bring us close to the communities and produce economic value but also provide education and facilitate the introduction of infrastructure through the National Federation of Coffee Growers or other entities.

What is the importance of the stores and the brand in promoting the image of Colombian coffee globally?
The stores are like an embassy and a visual point to which anyone in the world can go and feel like they are in a little piece of Colombia. There is an economic reason behind the stores, and we have different partnerships and franchises in the world. We seek for them to be truly profitable and grow.

How do you approach opening new markets?
In Colombia, about 70% of our stores are privately owned, which is our main expansion channel. We have different franchises in Colombia that are growing in places where we cannot grow or reach consumption occasions where we are not present. We have two different models around the world, one of which is partnerships, where we are shareholders of the company that operates the stores. We have partnerships in Chile, Ecuador, Spain, and the US and they have grown extremely well.

Which markets have the biggest growth potential?
We are not thinking about new markets right now in terms of stores, as we are focusing on the 13 countries in which we already have operations. We are opening one store in Argentina, and going back to Mexico is our priority for 2019. In terms of retail markets, we are optimistic about the US, Mexico, and Central America, where we already have a presence with some stores but can go through to retail. We are pursuing a retail business in Japan and South Korea, and we look forward to establishing a retail presence in other countries through supermarkets or e-commerce.