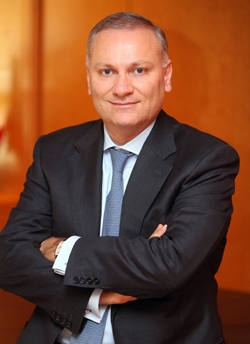 Saad Azhari started his banking career in 1986 at PBZ Privatbank, an affiliate of the UBS Group, where he was promoted to run the bank’s operations in the Middle East and Hong Kong. He joined BLOM Bank in Switzerland in 1991 and became the General Manager in 1997. Following success in several other positions within BLOM Bank, he became the Chairman and General Manager.

Share on:
"If the situation improves in the country and the region, I think Lebanese banks are going to see a huge improvement."

What have been the milestones for BLOM Bank over the last year?

Frankly speaking, this period was a difficult one for the region. The situation in Syria has been deteriorating and Lebanese banks, including BLOM, have a presence there. Also, almost all banks in Lebanon, even if they don’t have a Syrian presence, have connections to Syria. Definitely, the situation there has affected Lebanon in terms of the economy and tourism because a lot of tourists, like the Jordanians, come by land, which they cannot anymore. Having said that, I would add that the banks were able to absorb the negative effects of the Syrian crisis and are still able to grow, even if only moderately. Overall, it affected the operations in terms of taking provisions due to having less growth on the balance sheets because operations in Syria shrank; however, other operations went up. We just had a lower growth rate than normal; this is the effect of Syria.

BLOM Bank has a strong presence in other countries. How are your international operations looking?

Our business has been improving relatively well in almost all other countries in the region, including in Egypt. We are doing better in Jordan, and recently opened operations in Qatar and Saudi Arabia, albeit with limited licenses. We have been doing well and achieving good results in Saudi Arabia in terms of investment banking, real estate, and equity funds in the market. In Qatar, our operations are also becoming profitable and growing. Our operations in Qatar revolve around corporate banking licensed under the Qatar Financial Center, where we can offer private and corporate banking. These operations are also expanding. Our asset management business, whether in Lebanon or around the region, has been expanding significantly. We have also been able to grow in all areas of lending in Lebanon, especially in retail and housing loans. This is due to the Central Bank’s special stimulus package.

“If the situation improves in the country and the region, I think Lebanese banks are going to see a huge improvement.”

How does that stimulate growth, and what segments are going to benefit from this stimulus package?

A lot of areas will benefit from this, but the biggest effect is on lower- to middle-income housing. The economy probably is going to benefit by around 1% more growth due to this package. Rather than having a growth rate of 1%-1.5%, we are going to see a growth of 2%-2.5% due to the Central Bank’s package.

How has your product portfolio evolved in recent years?

Our products are always expanding. We have products in all areas: private banking, asset management, and funds. The latest fund we issued is on the Saudi Arabian equity market. This is new; it was not there a year ago. That is performing very well. We also launched many new retail products, such as different types of credit cards. We have expanded our activities in all areas, and we are number one or number two in all areas. We are also active in non-traditional areas of banking, such as Islamic banking. We run BLOM Development Bank, which is our Islamic banking unit. We have one branch in Beirut, and we opened a second branch in 2012 in Tripoli. We are planning to open a third branch soon.

How is Islamic banking developing in the country?

What are some of your short-term investment plans?

We are planning to open two branches in Iraq, one in Baghdad and one in Erbil, by the end of 2013. We are also continuing to expand our network in Lebanon, Jordan, and Egypt—basically, in places where we have a distribution network. For example, in May 2013, I opened a branch in Jordan in the free zone. It was branch number 12 in Jordan. We are by far number one in car loans in Jordan, with 45% of the market. I think number two has 12%. Also, in Lebanon, we are number one in retail credit cards, cars, and housing. BLOM really controls the retail market. Also in Lebanon, we are opening new branches in Beirut and elsewhere. In September 2013, we will open branch number five in Tripoli. There are some areas that we avoid, but Tripoli is the second biggest city in Lebanon. Overall, our branch network is expanding reasonably well in Lebanon.

How would you evaluate the development of electronic banking in recent years?

We always pursue new developments in electronic banking. We have done things that nobody else has done, like e-Cash, for example; the ability to transfer electronically to people who do not have accounts at the bank. They can withdraw this money from an ATM. If you are a customer at BLOM, you can transfer money over your computer to someone who is working at your home in the mountains, for example. You can send them $500 and they can go to an ATM and withdraw it with the code that you give them, even if they don’t have an account with us. In terms of phone and internet banking, we were the first to enter many different areas. We are advanced in IT, and we mostly develop our systems internally.

Could you describe the bank’s performance in 2012, and what are you expecting for 2013?

We have already published our 1Q2013 results and it showed improvement over our 1Q2012 results. We are still maintaining the best ratios compared to our peers; we have the highest return on equity (ROE) and the lowest cost to income. Even in terms of absolute figures of profits, we had the highest level of profits among banks in Lebanon, which in turn improved our profitability ratios. We are expecting 2013 to be a good year; however, growth will be moderate.

Where do you see banking in Lebanon standing in terms of Basel III?

Overall, the level of capital adequacy in the banking sector is already above the 10% level. For us at BLOM, we are now around 14%. The banking sector is required to arrive at a level of 12% before 2015. I think the sector will achieve it. This is a higher level in a shorter period than other international banks have managed to achieve. Also in Lebanon, effectively, almost all of our equity is tier one. The banks in Lebanon do not issue a lot of subordinated debt, and they mostly have tier-one equity, which is the best type of equity. I think we are okay in the banking sector, and we have tighter restrictions than have been issued by the Central Bank in terms of reaching these objectives.

Where do you envision the banking sector evolving in the near future?

The banks in Lebanon are very resilient. The situation of the banks is very solid. If the situation improves in the country and the region, I think Lebanese banks are going to see a huge improvement and significant growth. If the situation stays as it is now, which is a tight and difficult situation regionally and politically, then I think Lebanese banks are going to grow moderately over the next couple of years. Really, nobody can predict what will happen because it is linked to the difficult political situation. If conditions improve and we get tourism again, we can easily have growth of 6%-8%. If it stays like this, we might have 1% or 2%. Another thing is that the question of oil and gas has become very important and essential. If there is the political stability to go ahead with that, it could give a major boost to the economy. The investments that are required can definitely have a major impact on the economy, even before we get the gas. The question is if the companies will come and invest millions of dollars to explore. Hopefully, there will be a situation where we have a functional government and we can continue to go down this path.