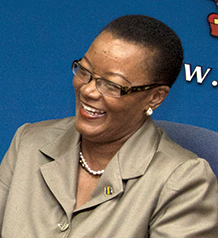 The Hon. Maxine McClean was invited to join the Cabinet of Prime Minister, the Hon. David Thompson, as a Minister in the Prime Minister’s Office in January 2008. In November 2008, Senator McClean was appointed Minister of Foreign Affairs and Foreign Trade and was re-appointed to that portfolio on February 28th, 2013. She is a graduate of University of the West Indies – Cave Hill Campus, where she received Upper Second Class Honours in Public Administration in 1978. In 1979, she was awarded an OAS Fellowship to do graduate work at Ohio University, where she received the MBA in 1981 and the MA in International Affairs in 1982. She also received a Fulbright Fellowship to Louisiana State University in 1986. In 1999, Senator Maxine McClean established her own consulting firm, Strategic Interventions Inc. As a Management Consultant, she has conducted in-house training for management and other employees of Goddards Enterprises Ltd., the Barbados National Bank, the Caribbean Development Bank and National Petroleum Corporation, and several small enterprises.

Share on:
TBY talks to Maxine McClean, former Minister of Foreign Affairs and Foreign Trade of Barbados, on the significance of regional integration, the importance of people-to-people exchanges, and the building of Barbados-Ecuador relations.

During the Summit of the Americas, the PM emphasized the importance of regional integration. What is being done in this regard?

Our primary area of focus and concern is within the context of CARICOM. Barbados is a small state with an area of 166 square miles with a population of about 300,000 people. That constitutes a small society and a small economy, but, of course, as part of the English-speaking Commonwealth, we share a common historical and social heritage with other Caribbean states, and recognize the value of collaboration and integration. This is a process that has been formalized over several years. We have signed many agreements and we are pursuing a single market and economy. For us, integration is a process that has evolved after independence in post-colonial times. It allows us to integrate our markets and engage the world jointly. There are not only economic and commercial benefits to integration, but it also allows us to become a regional family—literally and figuratively. Many Caribbean people have familial ties across the region, so within this context, integration allows us to realize a number of synergies, economic or otherwise.

What should be done to strengthen bilateral ties between South America and the Caribbean?

We are all part of a number of hemispherical organizations including the Community of Latin American and Caribbean States, CELAC and the Organization of American States. Within the context of CELAC, we have member states that have strong ties with other member states. For example, Cuba for us has been an important ally and a neighbor in many respects for many years. Barbados is one of four small countries in the region that defied the position taken by the US and recognized Cuban diplomatic relations. We have mostly engaged with Cuba in training and education. We have engaged Cuba in multiple ways since 1972. Two major areas of cooperation are training and education.

In a call by Ecuador’s Minister of Foreign Affairs Ricardo Patiño, both Ministries focused on human rights. How are both nations cooperating in this area?

Ecuador, like many other countries in Latin America, is a member of regional hemispheric bodies. As a small country, we have been unable to convert that multilateral engagement into strong bilateral relations. Barbados considers human rights a key pillar upon which society rests. We have been involved in regional bodies, of course, but as we participate more fully in CELAC and other bodies, we anticipate the ability to build stronger bilateral relationships. Our engagement in regional bodies must play out at the level of bilateral engagement, nation to nation. Language differences have been an issue that have limited the strengthening of relations between countries, in South and Central America and the Caribbean. The addressing of language constraints is an issue we have been working to solve, and is something we can explore with Ecuador, be it through us learning Spanish, or them learning English. People-to-people exchanges help with this.

What is your short term outlook for the economy of Barbados?

In the short term, despite the positive performance of key sectors, we continue to grapple with the need to address inefficiencies. The international business sector contributes the single highest percentage of our corporate taxes. We have been looking to diversify our economy away from tourism and international business. One area of focus is agriculture. Here we are looking beyond traditional approaches, and at the utilization of modern technology to render it commercially viable and attractive to our youth. We also have a renewed focus on science, technology, engineering, and mathematics. We are pleased that we have been able to tap the talents of the Barbadian and Caribbean diaspora.