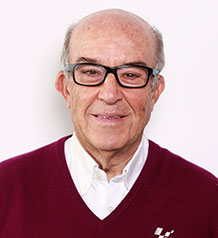 Carmelo Ezpeleta started his career as circuit founder and director in Spain, and was always driven by his passion for car and bike racing. Ezpeleta joined Dorna Sports in 1991 and successfully won the TV and commercial rights MotoGP TV in 1992. He build the motorsports association into one of the worlds’ most watched events. Prior to joining Dorna Sports, he served as circuit director in Spain, including at the Catalunya track, and he was on the management of the Ford Race Team. He received the Spanish Sporting Merit Gold Medal in 2010 for his achievements.

Share on:
"Sepang is a modern track and has been a global frontrunner since it was conceived, designed, and opened."

MotoGP started racing on Sepang International Circuit in 1999, even before the first Formula One race. How has the Malaysian leg of MotoGP changed over 17 years?

As with any international event, the Malaysian Grand Prix is constantly evolving and improving. With better safety, improved fan facilities, and an incredible and growing fan presence, the MotoGP race at Sepang is one of the most exciting on the calendar and we are proud of our status as one of the largest and best motorsport events in Asia.

The Sepang track was designed by Hermann Tilke and has maintained the same configuration since opening in 1999. Do you think it can evolve with the times and the changes that MotoGP has seen?

Sepang is a modern track and has been a global frontrunner since it was conceived, designed, and opened. The layout creates incredible wheel-to-wheel action and gives fans great views of their on-track heroes, with the Main Grandstand complex especially proving one of the most spectacular and iconic on the MotoGP calendar. Counting on ever-improving safety additions as well as new asphalt in 2016 and some new cambers, the evolution of Sepang makes sure it maintains its status as one of Asia, and the world’s, most prestigious motor racing venues.

Because of the intense heat and high humidity, the Malaysian race is considered a challenging and exciting one. What makes the Sepang race spectacular?

The physical challenge of riding in the Malaysian heat is one of the things that makes winning the Malaysian Grand Prix such a prestigious award. The layout of the track—especially the final hairpin—also lends itself perfectly to wheel-to-wheel racing and the venue has staged some of the most iconic moments in two-wheeled sport. In addition, the Malaysian weather and threat of rain is another added ingredient that makes Sepang so special, as it can be another exciting addition to the MotoGP weekend.

Formula One has helped to put Malaysia and Petronas on the global map. How do you think MotoGP has contributed to Malaysia’s reputation in the world?

MotoGP has always had fantastic participation from Asia and has a long history of racing on the continent. It was a natural step for the world’s biggest motorcycling world championship to make Sepang International Circuit a permanent home for MotoGP in Malaysia, with Malaysian involvement in the championship going back a long time—from previous sponsorship from Petronas in the 250 World Championship to the DRIVE M7 SIC racing team on the Moto3 grid in 2016. In addition, 2016 saw the country’s first GP win, as Khairul Idham Pawi took his first victory in the Gran Premio de la República Argentina in Moto3.

What are your expectations for this year’s race?

I expect another spectacular showdown to showcase the best of the MotoGP grid and the best of the Sepang International Circuit. With another incredible season of racing in the MotoGP in 2016, the stage is set for the world’s greatest to once again take to the Malaysian asphalt for another classic encounter. With Marc Márquez leading the way from key rivals Valentino Rossi, Jorge Lorenzo, and Dani Pedrosa, the battle at the front is as tight as ever and will again light up the Malaysian venue as the season finale approaches and the championship goes down to the wire.