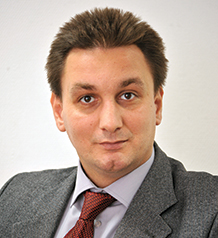 Vagif Sharifov is the Development Director for Trend News Agency. He has been working for Trend for 10 years and has 18 years of experience in the media, especially focused on the oil and gas sector. He holds a Master’s Degree in Economics and certificates in oil trading.

Share on:
TBY talks to Vagif Sharifov, Development Director of Trend News Agency, on coverage of European Games, primary focuses of the economy, and new platforms of media.

As the inaugural European Games approach, what will be the role of Trend in covering the event?

The European Games are truly a great event for Azerbaijan, and we are looking forward to hosting them. New arenas are being constructed in Baku with all available facilities being reconstructed. Beside the 68,000-seat Baku Olympic Stadium, which will host the opening ceremony, the Olympic Village with a capacity of 7,300 people is being developed. Of course, holding the first European Games in Baku brings with it broader international interest in Azerbaijan. We will make every effort to highlight this event as much as possible, with text, photo, and video content. The entire event will be broadcast via our website, Trend.Az, and through our social channels. Naturally, we expect our reader number to increase. We are also planning to create special Euro games-related projects on our website.

Which areas of the economy held the primary focus for Trend in 2014?

Azerbaijan is an oil and gas producing country. Of course, this sector is the primary area of our focus. Our analysts regularly publish articles reflecting the role of Azerbaijan as an energy bridge between Europe and Asia. We are working with major Western oil experts, who provide us with opinions on the international role of Azerbaijan’s energy resources. We will continue to pay attention to this area over 2015, as many export and transit projects remain under development, while new deposits are being explored. The non-oil sector of Azerbaijan also continues to be developed successfully. This allows the national economy to remain stable even amid falling oil prices since the autumn of 2014. For example, it may readily be observed that the Azerbaijani manat rate has not changed significantly, despite an almost threefold decline in oil prices, which continue to slide. Meanwhile, the non-oil sector, including IT, banking, agriculture, and construction, has been a focus of our attention and remains so.

What importance do social media have for your business, and what opportunities are there to develop this further?

Social media has become an integral part of the “life” of the internet; we cannot bypass this. For example, in Azerbaijan, Facebook ranks first among social media platforms with a share of almost 95%. We have an active presence on all major social networks. Trend’s English Twitter account, @TRENDNewsAgency, is followed by well-known media outlets such as The Financial Times, Bloomberg, BBC, Sky News, Turkish Weekly, Pipeline Magazine, and The New York Times, among others. The account is also popular among diplomats, and it is followed by the representatives of the European Bank for Reconstruction and Development (EBRD), the World Bank (WB), the UN Development Program (UNDP), and the US Energy Information Administration (EIA). Naturally, social media is an important element in our work, since it allows us to be closer to our users, learn about various events quickly, and get almost instant feedback from people. We will continue to pay special attention to social networks, since they help us in our work, and we, in turn, help people remain in step with the latest developments. A kind of symbiosis takes place, which will increasingly deepen in terms of its interaction.

How would you assess the progress of Azerbaijan’s media industry in the context of national development?