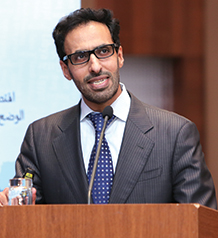 Dr. Raja Almarzoqi is the Advisor to Middle East and Central Asia Department and Mission Chief for Azerbaijan at the IMF. He was Minister Plenipotentiary, Chairman of Monetary Union Unit, Cooperation Council for the Arab States of the Gulf (GCC) from January 2005 until February 2008, where he also represented GCC countries and participated with the European Central Bank (ECB) in preparation for Monetary Union among GCC countries. He holds a degree in Economics from King Saud University and a PhD from Oklahoma State University in Economics and Finance.

Share on:
TBY talks to Dr. Raja Almarzoqi, Advisor to Middle East and Central Asia Department and Mission Chief for Azerbaijan at the IMF, on what makes the economy tick in the country's areas of growth.

What areas of Azerbaijan’s economy have seen the most growth, and which sectors have the most potential in 2015?

We have seen that the non-oil industries, specifically the construction and service sectors, have continued to support overall growth at a rate above 6% over 2014. Despite some restraint, they remain the main contributors to this relatively good performance and continue to benefit from heavy public capital spending, while the oil sector has disappointed, with growth below expectations on the back of falling crude production and exports. We see similar trends for 2015. The authorities perceive the agro-industry, IT, and tourism sectors as promising for increasing diversification and creating jobs.

While recognizing that investment in public infrastructure is essential for growth, the IMF has stressed that its impact depends on the efficiency and choice of priorities in public investment. According to the recent IMF report, the Making the Most of Public Investment in MENA and CCA Oil-Exporting Countries, even after their high levels of investment spending over the past decade amid high oil prices, oil exporting countries still face infrastructure gaps. The study highlights that strong institutions and better management of projects are crucial to making the most of public investment. This entails greater scrutiny of public investment. During our visit to Azerbaijan in late October, we welcomed the ongoing public expenditure and financial accountability assessment (PEFA) update and commended the authorities on the improvements set out in the preliminary findings of this report. We think this update should pave the way for further improvements in the efficiency of public spending in the country.

How would you assess national efforts to diversify, stimulate SME growth, and improve the business climate?

The economy has not been diversified away from oil yet, and the main driver of growth is government spending, mostly financed by oil revenue. Although the share of the non-oil sector has increased lately, its growth, too, heavily depends on oil-sector growth and government expenditure. The government has done a sterling job of tackling corruption at the lower levels but will need to broaden coverage of higher levels. However, according to cross—country studies by the OECD and IFC on SMEs, SMEs contribute much less to growth in Azerbaijan than they do in other countries—their share in GDP remains in single digits, well below the average of more than 50% in a sample of advanced economies, and below the Asian average of 30—40%. SMEs in Azerbaijan continue to face high costs associated with entry and exit procedures, contract enforcement, government inspections, and property rights. Insufficient access to finance is also an issue; more than half of SMEs in Azerbaijan lack access to financing. The government is making efforts in this area.

What reforms and changes are necessary to ensure a continuation of macro-economic development in Azerbaijan?

Reducing fiscal vulnerabilities is key to fostering non-oil private sector activity; we welcomed last year’s progress toward fiscal sustainability and have encouraged the authorities to continue reducing the non-oil fiscal deficit in the 2015 budget. The new oil price environment also heightens the need for reforms of the business environment and governance. The government’s commitment to reaching a more sustainable fiscal position has heightened the importance of these reforms.