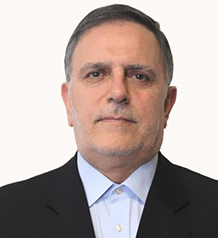 Dr. Valiollah Seif assumed office as the Governor of the Central Bank of Iran in 2013. He was previously the CEO of various public and private banks in Iran, including Karafarin Bank, Bank Mellat, Bank Saderat, Bank Sepah, and Bank Melli. Prior to that, Dr. Seif was the Economic and Planning Deputy of Mostazafan Foundation, Deputy of the Foreign Trade and Commerce Department of the Ministry of Commerce, and Financial Manager and Member of the Board of the Industrial Development and Renovation Organization of Iran (IDRO). He holds a PhD in accounting and finance from Allameh Tabatabaei University and is currently a faculty member.

Share on:
TBY talks to Dr. Valiollah Seif, Governor of the Central Bank of Iran, on meeting the Basel III requirements, fiscal policy, and economic forecasts for the year ahead.

What initiatives have been taken to drive Iranian banks to move toward Basel III requirements?

Since 2015, the Central Bank of Iran has put on its agenda the process of updating banking regulations such as capital adequacy requirements and liquidity risk management in compliance with international supervision standards, the most important of which is the Basel III Accord. Accordingly, drafting procedures on supervision capital and the capital adequacy of credit institutions codified by the provisions of the Basel III capital agreement, other countries’ experience, and considering Islamic banking specifications will be put on the agenda of the relevant authorities soon to fulfill the legal procedures to be approved. Obviously, after approval and notification of the stated procedure, it shall be implemented throughout the banking network. However, to support and update the liquidity management risk of banks and non-banking credit institutes and, considering this subject especially after the emergence of the global financial crisis and the related results and experiences, a draft procedure and minimum liquidity management risk of credit institutes has been prepared by using provisions of Basel III to be implemented after being legally approved at the state bank network.

Which fiscal policies have been implemented to control inflation?

As soon as the eleventh administration took power, the Iranian economy faced a worrying situation in terms of high inflation, volatility in the forex market, economists’ lack of confidence, a remarkable decrease in investment, and negative economic growth. Within this context, the Central Bank of Iran focused on stabilizing the economy by concentrating on controlling inflation. In this regard, the Central Bank managed to control the inflation rate by supporting monetary discipline and stabilizing the forex market. The Central Bank put financing the Maskan Mehr Plan for the growth of monetary and liquidity base on its agenda. According to the approval of the Monetary and Credit Council on February 2014, it was resolved that the credit required for completion of incomplete Maskan Mehr projects shall be financed out by the collected installments of the previously granted facilities. Moreover, we took effective steps to control bank liabilities to the Central Bank and support the monetary market discipline by designing and establishing “Chakavak” (Iranian cheque imaging system) and restricting bank overdraft backgrounds via Bank Clearing House.

What is your economic outlook for the year ahead?

After the Joint Comprehensive Plan of Action (JCPOA), new opportunities have emerged to increase financing and investment for the economy of Iran following oil production, improve access to foreign assets, reduce exchange expenses, and improve commercial relationships with other countries. One of the key factors in increasing economic growth in the current year is to increase the production and export of oil. As a result of the JCPOA and adopted measures, crude oil production volume in the country increased up to 1 million bpd. The initial predictions indicate that economic growth in 2016 will exceed 4%. Moreover, the implementation of the banking system reform plan, which was notified to the bank network this year, may provide the proper arrangement for reforms in the financial market and overcoming credit barriers in the banking network. If the plan is successful, it will solve credit barriers in banks, improve foreign financing, attract FDI, and may provide proper perspective for a meaningful increase in economic growth in the coming years. On the other hand, following policies and actions taken by the Central Bank concerning monetary discipline and stabilization of the foreign exchange market, we have observed inflation control up to 8.9% in August 2016. The Central Bank policy is to protect single-digit inflation, and the bank tries to stabilize inflation under 10%. Some risks resulted from reforming programs, such as the forex market reforms program, which may threaten inflation goals, but the equalization program has been designed in such a way that it has a minimum effect on price levels, and it is expected that the effects of the policy implementation will be properly managed.