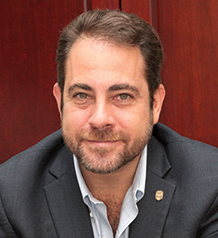 A graduate of ULACIT, HE Mario Etchelecu has a strong professional background in real estate and construction. Since 1999, he has been the General Manager and President of Bienes Raices COT. He has managed more that 28 residential and eight commercial projects in Panama, realizing over 5,500 housing units and 400 commercial units.

Share on:
How do you assess the impact of major urbanization developments across Panama over the past few years? Panama has developed a reputation both within Latin America and globally, as an […]

How do you assess the impact of major urbanization developments across Panama over the past few years?

Panama has developed a reputation both within Latin America and globally, as an attractive destination for investors and people looking to reside. We have a population of around four million people and the domestic real estate market is still much smaller than its economic potential. The construction sector in Panama is growing on the back of large projects; however, our challenge has to do with planning better urban development and having a longer-term vision. Our capital, for example, is currently congested with traffic, necessitating several projects such as the metro line, urban reorganization, and the development of suburban cities. We want to divert congestion and traffic away from the capital. Over the past few years there have been important retail, commercial and housing projects. For example, we have developed several social housing projects and provided economic support to people with less economic means.

What is Panama’s current housing deficit?

When we took over, the housing deficit was 142,000 units. These numbers represent a cruel reality, namely that housing was not a priority for previous administrations. In stark contrast, we have made social housing a top priority. The Ministry has duly developed several programs to give access to housing and build new units. For example, in 2015 the Ministry is set to tender and build 15,000 new housing units.

Can you elaborate on the development plans the government has for Colón?

Colón is located at the Caribbean side of the Panama Canal. The reality is that Panama City is a developing city that attracts people and investment. Colón, however, has been left behind and has lacked investment in infrastructure, both socially and economically. Commercially speaking however, Colón is the second most important city in Panama, and in terms of population, the third. It needs a clear push for development. Housing programs and investment in infrastructure are at the heart of our efforts to develop the city. We will build 5,000 new housing units in the short-term. This will be accompanied by recreation and sport infrastructure. We will also invest in public service infrastructure such as water, electric energy infrastructure, and the like. Colón is a city with a long history that has been forgotten by other administrations for many years. The city has lost its attractiveness, but we want to transform the city into a tourism destination for both national and foreign tourists. For example, we will improve road infrastructure networks in and out of the city. This city has potential and we want to modernize the city and take action, for there are areas in the city that face desperate situations.

What other areas of the country are included in the Ministry’s top priorities for the next few years?

The government’s “Roof of Hope“ program initiated action with the expectation of helping 5,000 families gain access to housing every year. The program also works on securing drinking water and other basic services, and reducing the housing deficit by targeting the most vulnerable communities of the country. By December 2014, as many as 3,600 families had benefited from this program. This was only few months after setting up the project. We also developed programs to secure the reintegration of former gang leaders and members into society. Overall, our top priority areas are those for high risk and vulnerable communities.

Among our goals are getting the urban reorganization project tendered and approved, so we can start construction. The Ministry wants to reach all 5,000 families in 2015 within the “Roofs of hope“ program, and 10,000 by 2016. We also want to continue the tendering process for the construction of 12,000 housing units across the country.