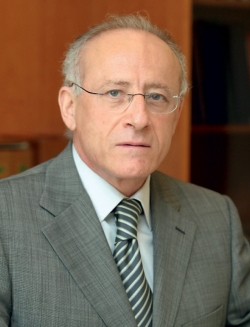 Makram Sader has been the Secretary General of the Association of Banks in Lebanon (ABL) since 1991, where he is actively involved in the reorganization of the banking industry, with an emphasis on regulations, along with highly recognized standards. He also acts as Chairman of Lebanon’s Banking Commission (ICC), a Board Member of the Caisse Nationale de la Sécurité Sociale (CNSS) in Lebanon, and an effective member of the Lebanese Economic and Social Council. He graduated from the University of Grenoble in France in 1979 with a PhD in Economics, and began his career teaching International Economics at the Lebanese University, carrying out at the same time several studies as a full time researcher at CERMOC. Between 1985 and 1991, he was nominated as the Director of Research & Studies at the Union of Arab Banks (UAB) and played a key role in inter-Arab cooperation on banking issues. Over 1998-1999, he contributed significantly to the elaboration of the Lebanese government’s five-year Financial Reform Program and headed up the Banking Commission within the Syro-Lebanese Businessmen Council.

Share on:
How is the continued deficit in the balance of payments and falling capital inflows affecting the profitability and net returns of the Lebanese banking sector? Though we had a deficit […]

How is the continued deficit in the balance of payments and falling capital inflows affecting the profitability and net returns of the Lebanese banking sector?

Though we had a deficit in the balance of payments for the last three consecutive years—2011, 2012, and 2013—and in the amounts of $2 billion, $1.5 billion, and $1.1 billion, respectively, we believe that this shrinking deficit trend is likely to be discontinued over 2014. In fact, we had a surplus in the balance of payments in 1Q2014 of $301 million. In any case, the shift from a $3.3 billion surplus in the balance of payments in 2010 to a deficit of $2 billion in 2011 was associated with a drop in the profits of banks by 3.4%, then the profits slightly declined by 0.6% in the following year to increase by 4% in 2013 to the equivalent of $1.6 billion. It would seem, therefore, that the banks were able to adjust quickly to the new environment and minimize the adverse effects.

How exposed do you perceive Lebanon’s top banks to be to the country’s public debt risk?

The total claims of commercial banks on the public sector stabilized recently at 22.8% of total assets, while the share of foreign currency denominated claims is at 10.5%. We believe that this level of exposure is manageable, with the weighted life on government debt securities denominated in LBP close to 3.4 years, and that on securities denominated in foreign currencies around 5.5 years. Nevertheless, the banks are continuously pressing the government to speed up the needed reforms to keep on financing part of the government deficit; otherwise, they will only roll over existing debt.

In what ways is the Association of Bankers in Lebanon (ABL) working to combat money laundering in the local banking sector?

Combating organized crime and money laundering were high on the agenda of talks between the ABL Board of Directors and Interpol on January 28, 2014. ABL’s Board reviewed these issues with the Secretary General of Interpol Ronald Noble and his accompanying delegation, and both sides agreed to strengthen areas of cooperation to better combat financial crimes, such as money laundering and terrorist financing. Such talks follow similar regular discussions with the US Treasury and some US congressmen to assure compliance with the latest international regulations on Anti-Money Laundering/Combating the Financing (AML/CFT). Lebanon is not and has never been a part of the Financial Action Task Force (FATF) list of jurisdictions that are either subject to counter measures by the international regulatory bodies, or ones that have made sufficient progress in addressing the deficiencies in AML/CFT, or ones that have only recently provided a high level of political commitment to address deficiencies.

The ABL developed early on a manual of policies and procedures for compliance with the US FATCA regulation with the valuable assistance of Deloitte for the banking sector. It covered many key points, which include the qualifications or competencies of the responsible officer, and a checklist for all pre-requisite actions for a bank to become compliant. Banks are constantly raising awareness of the issue to employees and customers. The IT departments are effecting the necessary cost changes and modifications, and many banks have started to register with the IRS. A questionnaire for FATCA compliance readiness was developed and circulated by the ABL recently. The responses were positive in terms of the appointment of a project sponsor and a responsible officer. A FATCA steering committee is also in place as well as the procedures for opening new accounts incorporating FATCA requirements. Overall, most banks are ready and will hopefully comply fully by the due date.