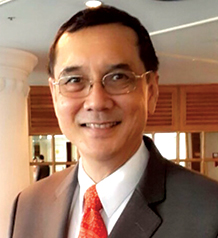 Kobsak Duangdee was appointed as the Secretary General of the Thai Bankers’ Association on January 1, 2015. He is also a Board Member of National ITMX Co., Ltd., which operates the national switching system of ATM and payments. Duangdee has a bachelor’s degree in banking and finance from Chulalongkorn University, Thailand, and an MBA from the University of Tennessee. His experience in the financial sector extends over 33 years, with more 20 years as the Country Head of an international bank in Thailand, responsible for Thailand, Laos, and Cambodia. In addition, Duangdee was an active member of Thai-Canadian Chamber of Commerce for more than 10 years and served as President of the Chamber for three consecutive years.

Share on:
TBY talks to Kobsak Duangdee, Secretary General of the Thai Bankers' Association (TBA), on digitalizing the bank sector, simplifying banking in the ASEAN region, and expectations for the sector.

How can banks try to encourage more digitalization and technological innovation in the banking sector?

Such a change is not just up to banks but must also involve the private sector and the government as well. One of our initiatives in our five-year plan is digital banking, which we are working closely with the government for. This would help digitalize SMEs, promote more online banking, support e-commerce and e-government, promote payment procedures both nationally and internationally, and encourage other banking practices.

Many banks have been looking to expand in the region. How has the AEC benefited the process of expansion for Thai banks internationally?

Thai banks are growing, not just in Thailand but internationally as well, although not as fast as banks in other ASEAN countries. Our main purpose is to support them in these efforts and to expand into new markets and regions. The AEC will help open these markets in ASEAN through the Qualified ASEAN Bank (QAB). That being said, Thai banks have already set up branches overseas, in Cambodia and Laos mainly. Thus far it has been difficult for Thai banks to penetrate other markets, particularly in the retail segment. That may change now thanks to mobile banking and e-banking practices and technologies. It would have been hard in the past as it was necessary to be there physically on the ground, but now and in the near future we expect more Thai banks to offer their services across the border. Looking further afield, we support Thai banks’ expansion into any and all markets and try to facilitate that process, regardless of the region, whether it is Latin America, Asia, Europe, or Africa.

In terms of ease of doing business in Thailand, what role can the TBA play in improving Thailand’s ranking worldwide?

I do not think banking services play a major role in that ranking. In terms of how we can facilitate ease of doing business, in the AEC and ASEAN we look into policies that ensure we have a more convenient and efficient way of doing business and conducting transactions between AEC and ASEAN countries. We set up the ASEAN Payment Network as part of this initiative, for example. This will make it easier to use credit cards and bankcards for payments in other countries, ease foreign currency exchanges, and also increase online transactions and e-commerce opportunities. Regulators have also supported new investment tools and procedures that will make the exchange rate more competitive through various exchange and swap arrangements with foreign countries like China and Malaysia.

What are your expectations for the banking sector in the long and medium term in Thailand?

As part of our five-year plan, we are trying to make the banking system in Thailand more efficient by reducing unnecessary costs and procedures and barriers in the system. The Thai system is now sound, with a healthy financial ratio. The payment system in Thailand has not changed greatly. One thing we need to address is the predominance of cash payments in transactions, which make up to 80% of all transactions. We want to bring that down to at least 50%, which will help reduce costs in the Thai banking system. Banks also need to cooperate more and work closely together to help achieve these goals. We also look at helping Thai banks expand into other countries, especially neighboring countries. As for any major activities at the domestic level, regulations are tight to open a bank in Thailand, but we may indeed see mergers in the future. Expansion will ultimately be driven by customer needs and demand. Right now we have 15 member banks, and it remains to be seen whether more are needed, but I am also sure the QAB will bring in more banks to Thailand.