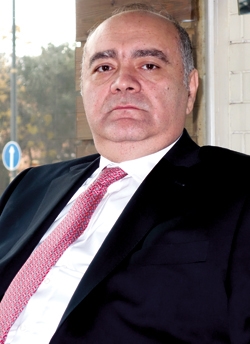 Fuad Mehdiyev entered the Azerbaijan State Oil Academy in 1979, and in 1984 graduated from the Department of Oil and Gas Production with a degree in the operation of oil and gas fields. In 1986, he entered the post-graduate school at Moscow State University named after M. Lomonosov. He holds a degree in chemical sciences. He was the Chairman of the Supervisory Board of Design Bureau “Integral“ in Moscow. Since 1997, he has been the President of TAJ.

Share on:
What was the idea behind starting TAJ, and what strategy has guided your expansion and diversification? Today, 15 years after the establishment of the Aquavita brand, it is difficult to […]

What was the idea behind starting TAJ, and what strategy has guided your expansion and diversification?

Today, 15 years after the establishment of the Aquavita brand, it is difficult to imagine the realities of the period that preceded the establishment of TAJ, and the creation of the flagship brand Aquavita. By early 1995, Azerbaijan was faced with the problem of a complete mismatch between the local consumer market and the needs of foreign experts who began to arrive in the country to implement the “Contract of the Century.” At that time, Azerbaijan was simply unable to offer products consistent with Western standards, and the country faced the task of replacing the import of consumer goods in a short time. As a result, world-class hotels started to open in the country. Manufacturers of food and beverages meeting international standards also started emerging. In fact, two brands, Shollar and Aquavita, became pioneers in the drinking water market in Azerbaijan. It is significant that we entered the market in the year when the production of “early oil” started under the “Contract of the Century.” Indeed, initially we operated within the framework of the policy of import substitution, which is still relevant in various segments of the food market. However, the market focus of Aquavita went beyond the expatriate community attracted by the country’s oil boom. We have always known that the quality of life in Azerbaijan would grow in parallel with economic development, and table water will not just be a fashionable decoration but will enjoy real demand.

How would you describe the FMCG market in Azerbaijan and how do you intend to place your products ahead of well-established multinational brands?

It may seem surprising, but Aquavita is a brand as strong and recognizable in Azerbaijan today as Perrier is in the US and Europe. Today, the competition in Azerbaijan’s table water market is perhaps stronger than outside the country. One or two aggressive brands appear almost every year and begin to fight with traditional suppliers for a place in the sun. An answer can only be provided through regular technological upgrades and the enhancement of the product range. Today, TAJ products are represented by the following brands: Aquavita, Gulustan, Three Stars, and Shahdag lemonade.

What are your future expansion plans?

TAJ and the entire economy are moving away from import substitution and toward exports. The sheer volume of the market forces us to do so. However, as owners of the Aquavita brand, we have no room for error. Therefore, we are obliged to offer foreign consumers not just an excellent product, which we already have, but something amazing that would win over even the most demanding customers. This objective requires not only correct marketing moves, but also a real breakthrough in improving the quality of products. In this regard, we have dedicated the last few years to the reconstruction of our production process on the basis of the world’s best technologies. Collaborating with such global brands as Krones of Germany, we are technologically prepared for the export of quality products. By increasing the number of international certificates for our products in 2012 (ISO 2009), we have taken another step toward the European market. We are already involved in a series of talks as part of the research of foreign markets. Our focus is not only on the food markets of the CIS, Georgia, and the Baltic states that are traditional for Azerbaijani products, but also on the so-called “distant abroad.” The potential markets include countries of the Middle East and North Africa (MENA), where new opportunities are emerging after the Arab Spring. We started our work thanks to the wise policy of the national leader Heydar Aliyev, and we are still reaping its fruits. If it hadn’t been for the “Contract of the Century,” the Aquavita brand would not exist now. At the same time, we are very grateful to President Ilham Aliyev for his policy of opening Azerbaijani products up to foreign markets.