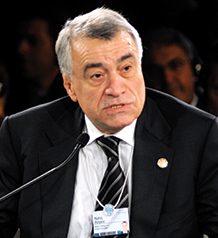 More Power to You

After graduating from university, HE Natiq Aliyev worked at the Azerbaijan Offshore Petroleum Trust and the Geological Exploration Office of the Kaspmorneft production association. From 1993 to 2005, he was President and Chairman of the Board of Directors at the State Oil Company of Azerbaijan Republic (SOCAR), and on December 9th, 2005 he was appointed Minister of Industry and Energy, which became the Ministry of Energy in 2013.

Share on:
TBY talks to HE Natiq Aliyev, Minister of Energy, on the country's distinctive position in the region as a net exporter, and the major developments of some of the world's most significant energy projects.

Looking back on 2014, what were the most significant developments and changes for the Ministry of Energy?

In the Black Sea region, Azerbaijan and Russia are the only two countries that do not depend on energy imports. We are net exporters, exporting around 35 million tons per year through our main export pipeline Baku-Tbilisi-Ceyhan, and a smaller pipeline, Baku-Novorossiysk. We export around 2 million tons of petroleum products and 9 bcm of gas. The country exchanges electric energy with Russia and sells electric power to Georgia. We also have the potential for the exchange of electric power with Iran. The main aspect of 2014 was the development and implementation of the Southern Gas Corridor and the construction of the Trans Anatolian pipeline (TANAP). On September 20, we held a ceremony for the foundation of the new corridor with the presence of all ministers, presidents, and government representatives involved in the project. This new gas pipeline is one of the key European projects of the 21st Century and will allow us to reach a greater European market. We have worked on the Southern Gas Corridor through four interconnected projects: TANAP, Shah Deniz II, the extension of the South Caucasus pipeline Baku-Tbilisi-Erzurum, and the Trans Adriatic Pipeline (TAP). The Shah Deniz pipeline is 25% complete. Our first gas delivery to Turkey is planned for 2019, with 6 bcm, and by 2020 we will start to supply Europe with 200 bcm. As of the beginning of 2015, 25% of complex technical works have been completed, which include the construction of buildings and two platforms connected by bridge, drilling of 26 sub sea wells and their connection to the platforms, pipelines, and their equipment. Occupying 3,800km, it is highly complex and one of our most unique projects undertaken thus far.

There have been significant changes in foreign investment into Azerbaijan’s energy sector, at Shah Deniz 2 for example. What impact does it have on the sector?

Azerbaijan now has more internal investment as the country has become financially stable. The main share of foreign investments come from previous contracts. Now we are investing ourselves. The entire Southern Gas Pipeline project is close to $45 billion. Shah Deniz 2 requires an investment of $25 billion, and Azerbaijan will contribute $2.5 billion, considering that 10% of capital investment is ours. In the TANAP, 58% belongs to the country, and in the TAP we have 20% of shares. As for Azeri-Chirag-Guneshli, we own 10% and have provided the $2 billion capital investment. Many power stations are being constructed in Azerbaijan. In the past six months, we managed to completely update energy production, abolish outdated power stations, and modernize them through our own investments. We are attracting the European Development Bank, Islamic Development Bank, and Bank of Asia through the provision of certain benefits, in order to implement a range of upgrades. The government debt of Azerbaijan is minimal, around 7% of GDP, and our loans do not affect the financial position of the country. Foreign investments are useful as they not only put business in line with the global environment, but also demonstrate the extent of foreign interest.

The global oil price has had some difficulties in the last 12 months. How has the Ministry of Energy combated it so far?

Around 90% of Azerbaijan’s cash flow depends on oil and gas production. However, we are able to provide for ourselves. We have the State Oil Fund of the Republic of Azerbaijan (SOFAZ), created by Heydar Aliyev in 1999, in anticipation of any crisis. Oil is not just our treasure, but also the treasure of future generations. All profit from oil products extracted at fields holding foreign investments must go to SOFAZ, and the main cash flow from production sharing agreements (PSAs) with foreign companies accumulates there. Azerbaijan is interested in reasonable oil prices in the future and for many years we have been holding negotiations with OPEC countries. Many experts agree that a price just above $80 could have satisfied both exporters and consumers. Right now, the real price is $50-60, and we are not seeing the same profits as in 2014. This will diminish the volume of our currency, but will not damage us significantly. A brief period will not be too problematic, but if this situation upholds much longer we will have to take more decisive measures.

How is the Ministry of Energy involved in Azerbaijan’s main event for the year, the First European Games

These games are important not just for Azerbaijan, but also for Europe. For Azerbaijan, it is important to receive guests and show how the country is developing. Each individual is dedicated to the Games, not only the ministries and government bodies involved. Our task is to guarantee power supply for the sporting events. For the Ministry of Energy, the Games is an opportunity to test our power-supply systems in extreme conditions and serious circumstances. It is a prestigious event to host.

Looking ahead, what are your major objectives for 2015?

We started a very important reconstruction program of the entire petrochemical industry that will extend to 2030. This work aims to change the structure of the industry and move petrochemical plants from Baku to other territories. We are thinking about environmental protection and the rational use of natural resources. If we compare the index of energy resource supply by country, Azerbaijan has a high position on a global scale. Productivity in Azerbaijan is higher than consumption. If the world has gas supply for 60 years, then Azerbaijan has 100 years; the same with oil. The existing infrastructure is constantly being upgraded, and we do not expect any problems. Even if oil and gas prices remain low for some time, projects in the energy sector will not slow down, and we are planning to maintain oil extraction at a stable level. As for gas, we will add new extraction fields and increase production, introduce new deposits, and continue with our investment strategy with foreign companies. It is still too early to talk about radical changes in structure, tactics or strategy, but we have a priority plan to focus on the implementation of the Southern Gas Corridor by 2020. We are optimistic about 2015.