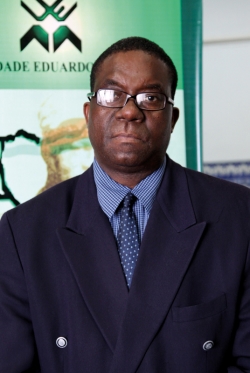 Orlando A. Quilambo was born in Mozambique and obtained his BA at the Faculty of Education at the Eduardo Mondlane University. He obtained his PhD in Natural Sciences at the Department of Plant Biology, University of Groningen in the Netherlands. He was Vice-Rector for Academic Affairs from 2005 to 2011, making a great contribution for the formulation of the Research Policy and Scientific Journal at the university. Since 2009, he has been the President of the Academy of Sciences of Mozambique and since 2011 Rector of the Eduardo Mondlane University. He has coordinated several programs and research projects, and he has published more than 20 journal articles and a book.

Share on:
As the oldest and largest university in Mozambique, how significant is Eduardo Mondlane University (UEM) to education in the country? UEM, which was created in 1962 as Estudos Gerais Universitários […]

As the oldest and largest university in Mozambique, how significant is Eduardo Mondlane University (UEM) to education in the country?

UEM, which was created in 1962 as Estudos Gerais Universitários and later Universidade de Lourenço Marques, was the only institution that was responsible for higher education in Mozambique during the colonial period. The period after 1975, following independence, is the most significant. At the time, UEM was the only university in the country offering Bachelor’s and Licenciatura degrees. By the 1990s, we realized that a university cannot only be a place of teaching. With that in mind, and with the help of our partners, we established research facilities as part of our institution. We also began to have students studying Master’s and PhD degrees both internally and externally. UEM has been offering such degrees in Mozambique since 2001 and 2009, respectively.

How have you partnered with international organizations?

Starting at the end of the 1970s, we had lots of support from the Swedish International Development Cooperation Agency (SIDA), which was responsible for all teacher training within the institution. We also had support in that period from the World Bank, which was responsible for the infrastructure as well as training in some key areas. Recently, the number of partners has increased. We also have support from the Flemish part of Belgium, which is supporting sexual and reproductive health at the Faculty of Medicine. Italy is supporting the academic and research management system. Another major partner is South Africa, where many of our students study and we maintain many academic links. Through NORAD, we have cooperation with Namibia and Botswana, for example. Some of our lecturers also are external examiners in Swaziland. However, the biggest level of cooperation is with South Africa. In terms of scholarship opportunities, Australia, South Africa, and Europe are popular, and normally students return afterwards. Asia is not a popular destination yet, but China will probably be more prominent in the future.

How is the university working with international companies to build human capacity to work in the highly technical environments associated with the mining and natural gas sectors?

We have some courses within the university that are related to the areas that are now being discovered. UEM has a very strong department of geology, which does not deal directly with all of these things, but it deals with coal and natural gas. However, it was not very well oriented. With these new discoveries, we looked at our capacity, and we realized it was possible to direct our training toward the market’s needs. We are also developing courses with Anadarko and ENI to meet the needs that are currently arising. We have our own funds that are designated to new courses. However, because of the great costs, UEM will also have to rely on private investment. If we want to run courses together, we also have to share the costs. The most expensive part is the equipment because we do not have everything we need here. A large amount of investment is needed. In terms of human capacity, I think we can retrain some of our people. In one or two years, they will be able to manage these new skills.

What would you say is the biggest challenge currently facing the university?

Our biggest problem is capacity—we receive approximately 30,000 applications per year for only 4,000 places. We have tried to expand by opening schools in the provinces, but even these do not satisfy the need. We should also try to offer distance education so we can reach people who are not necessarily in Maputo. Another challenge is related to the educational qualifications of the lecturers in the sister universities. Most of them only have a Bachelor’s degree, with which it is impossible to give sound education at a university.

What is the potential for the establishment of private universities?

There is still potential. We have a population of about 22 million and the whole system is responsible for about 110,000 students. This means there are still many people who want to study at university. Unfortunately, the universities are not investing in science and engineering, which is more important for the development of the country. There is potential there for private institutions.