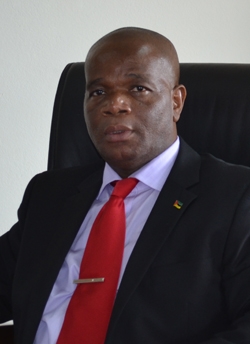 Minister of Science and Technology, Mozambique

Luis Pelembe has been the Minister of Science and Technology since October 8, 2012. Born in 1964, he obtained a degree in Chemical Engineering from Eduardo Mondlane University in Maputo, graduating in 1990. He then continued his studies at the University of Illinois in Natural Resource Management. He went on to obtain a Master’s degree in Food Science and Technology from the School of Advanced Studies in Agricultural and Rural Development at the University of Pretoria, South Africa, later earning a PhD in Agro-processing from the same university.

Share on:
"Countries that are economically developed today are like this because they invested in science and technological innovation."

How would you characterize Mozambique’s progress in terms of technology adoption?

Mozambique’s progress has been nothing short of remarkable, although the majority of the population does not recognize this fact. For example, in the area of ICT, it is known that even in the most remote areas illiterate people are using cell phones; there has also been a marked improvement in the expansion of e-government in the various districts of the country over the past five years. Biotechnology is being talked about extensively, and with increased mining activity, cutting-edge technologies for the extraction of ores have been brought into use. This said, there is still a large part of the population that utilizes rudimentary technology to carry out, among other things, agriculture- and livestock-related activities.

What role can science and technology play in the economic development of Mozambique?

Countries that are economically developed today are like this because they invested in science and technological innovation. The use of scientific models for solving day-to-day problems, plus appropriate technology for these purposes, has room to grow, such as, for example, in the sector of agriculture and livestock, decreasing exports, and increasing imports, which will lead to an increase in the gross domestic product of the country. Without a doubt, the development of Mozambique is linked to its investment in scientific research and in human resources training. Through the creation and rapid diffusion of knowledge based on scientific research, technological progress, and social experience, science and technology have become the main drivers of change in both developed and developing nations. In the emerging knowledge economy, ICT is a key component of its development, driven by knowledge, particularly in the growing service industries and global markets. We believe that the development of this socio-economic pearl of the Indian Ocean not only depends on the allocation of resources, but on the level of knowledge or research that Mozambicans, particularly the new generation, can accomplish. For us, innovation must be the engine of Mozambique’s socio-economic development. At the microeconomic level, innovation can increase companies’ productivity and profitability and positively change market sizes. At the macroeconomic level, it should improve the level of income and employment, and access regional and international markets. Therefore, for Mozambique to achieve its desired socio-economic development, we must urgently go for approaches that emphasize a knowledge-based economy, in which the synergies of relationships between education and research institutions, and private industry and government, are increasingly important. The primary role of the government of Mozambique is the creation of a favorable environment for scientific and technological development. The manufacturing sector, comprising private and public companies, has the task of acting as the fulcrum of innovation.

“Countries that are economically developed today are like this because they invested in science and technological innovation.”

How would you characterize the significance of the Maluana Science and Technology Park for Mozambique’s technological development?

This park is a symbol of awareness of a need for the country to develop science and technology. Such parks provide a medium for the creation of infrastructure and appropriate space in one locale for cutting-edge research, education, incubation, entrepreneurship, innovation, and technological development. This is a first for the country, and, due to the size of Mozambique, there is a need for additional parks in other parts of the country to enable integrated development. It is also a challenge because we need this first experience to yield results to justify the investment made so that other Science and Technology Park initiatives can be achieved. The Maluana Science and Technology Park, at a distance of 60 kilometers north of Maputo, has great significance for Mozambique’s technological development since this complex will enable the development of scientific research, promote innovation and the development of human capital, and the establishment of incubators and technology-based commerce. If we align the activities of higher education, scientific research, and innovation institutions that will determine the generation and accommodation of technology-based businesses, as well as products and services that may also have applications beyond Mozambique, then there is excellent potential here. This park also includes activities related to research in areas such as biotechnology and ethno-botany. It is in this park where infrastructure important for the economic and social life of the country will be located, such as the data center, which will serve not only the government, but also the national and foreign private sector.

What efforts is the government making to meet the challenges that Mozambique faces in terms of technological infrastructure?

Government efforts to meet the challenges of technological infrastructure that Mozambique faces are based on the promotion of a program of support and the creation of science and technology infrastructure, aimed at consolidating and qualifying the supply of technologies and services. In terms of the physical infrastructure and equipment components, creating expansion projects or the rehabilitation of existing technological infrastructure may also be considered on an exceptional basis to develop physical infrastructure. This could comprise specific buildings and facilities for common use, as well as lab equipment, and others, enabling the development of expertise in technological areas relevant to the competitiveness of companies and/or the diffusion of knowledge. We seek to promote the consolidation of science and technological infrastructure to avoid the duplication of entities with overlapping objectives, while also promoting the inclusion of this infrastructure in regional and international networks. The efforts of the government include the adaptation, renewal, upgrading, and expansion of scientific equipment and the infrastructure of scientific and technological institutions, including the remodeling or upgrading of scientific infrastructure to promote safety and energy efficiency. The efforts of the Ministry of Science and Technology can be seen through a number of initiatives such as the Millennium Villages, an integrated development program based in impoverished communities operating on the principle that scientific knowledge can foster economic and social development. There are numerous examples of institutions involved in this research, such as the Center for Research and Development in Ethno-Botany (CIDE), the Center for Research and Transfer of Technologies for Community Development (CITT), Maluana Science and Technology Park, Community Multimedia Centers (CMCs), the Umbelúzi Centre for Research and Transfer of Agricultural Technologies (CITTAU), the Xai-Xai Laboratory of Marine Biotechnology, and the National Center of Biotechnology and Bioscience (CNBB).

What are your policy priorities over the coming year?

The great challenge comes from the need to transform science, technology, and productive innovation into the primary driving force in our efforts to eradicate poverty in Mozambique. In this context we believe it is necessary to ensure that scientists located in research institutions produce knowledge that is geared toward the production of food. Special attention should be given to the improvement of productivity, production, and post-harvest technology and the issue of water resources, and to ensuring that knowledge is available, affordable, and easily transferable to the market, especially rural communities with higher rates of poverty. Our main priorities can be broken down into the following: human resources, infrastructure and facilities, knowledge transfer, and improved legislative regulation of technology-related activities.