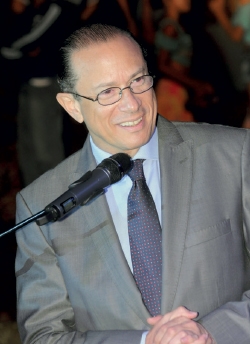 José Antonio Rodrí­guez was appointed Minister of Culture in August 2012. He has been a celebrated name in the music world since playing with groups such as ONDA 73, Los Paymasí­, and Grupo Módulo in the 1970s. He has achieved worldwide renown since winning multiple Dominican and international prizes for his songs. In addition, he has received acclaim for his productions and scripts for various shows and television programs.

Share on:
In your opinion, what are the differentiating elements that form the Dominican identity? Cultural identity is an essential cornerstone of the Ministry’s cultural management efforts; we must understand that even […]

In your opinion, what are the differentiating elements that form the Dominican identity?

Cultural identity is an essential cornerstone of the Ministry’s cultural management efforts; we must understand that even with the rapid changes that society has experienced with globalization, it seems that people are still symbolically linked to local and national identity. Therefore, it is important to draw public policies to strengthen our cultural expressions and help us discover our local essence and differentiating elements from others. I always highlight the idea of giving value to our identity within our working team. By nature, the processes of identity are dynamic, which is why we focus on the recognition and promotion of those aspects of our identity, especially affective symbolic aspects that are part of our territories. For example, we highlight and recognized the work of important artists and intellectuals, tradition bearers, cultural institutions and those cities that have been declared a “Cultural City”. Our effort is aimed at those seeking shared and symbolic representations that are embodied in individuals, works, and expressions of our culture. Moreover, we have started promoting “rescue work” and value of identity elements, as in the case of expressions of Dominican folklore such as dance and chants, strengthening them through funding, support for dissemination, and preservation thereof. As part of the National Call for Projects, we are supporting the initiatives of multiple groups from various regions of the country. In short, the differentiating elements of Dominican identity are given by the mixture of the manifestations of ethnic groups that are the origin of our people and are expressed in a different form in each region and community of the Dominican territory.

What mechanisms have been activated by the Ministry to protect and preserve the tangible and intangible cultural heritage of the Dominican Republic?

Among the initiatives to strengthen the cultural institutions in our country, we created the National Culture System, aiming at the decentralization of the state’s cultural activities. This process requires efforts at both the central and local government level. The Ministry of Culture has worked on the formation of the Provincial Councils of Culture and the implementation of the National Call for Projects, seeking participation and democratization of cultural resources. These actions have enabled us to directly link authorities with cultural managers, boosting the participation of local governments. Similarly, we work to protect and preserve the tangible and intangible cultural heritage, and right now we are in the process of reviewing current cultural legislation, while promoting a draft law on the Protection, Safeguarding and Promotion of Dominican Cultural Heritage. We also work on an official certificate for the export of local crafts and visual arts and the revision of the National Network of Museums. We have included Cultural Heritage as one of the axes of funding in the National Call for Cultural Projects and we aim at reintroducing a draft law on crafts. Currently, the Ministry of Culture has been involved in a program to strengthen national capacities for the Intangible Cultural Heritage through workshops sponsored by UNESCO and we are set to launch a new website on Dominican World Heritage. Finally, we have a cooperation agreement on Risk Management of Colonial Cities and Museums with the Ministry of Armed Forces for the Protection, Safeguarding and Development of Dominican Cultural Heritage.

What measures does the Ministry implement to create further synergies between culture and education and culture and economy as key factors for development?

Since our arrival at the Ministry, and following the guidelines set by President Medina, we have implemented a series of measures to establish strategic alliances for the success of cultural and educational management. We have already submitted to the Ministry of Education a portfolio of projects to be developed, and we are in talks to establish a new interagency agreement for the development of arts education. Regarding economics, we are set to create a specialized agency for the promotion of the cultural and creative industries, which will direct cultural policies for this sector. We also work on determining the real impact of cultural activity in the national economy. Finally, the Department of Education and Training attached to the Vice Ministry created in coordination with the Latin American Faculty of Social Sciences (FLACSO-RD) the first Diploma in Management of Cultural and Creative Industries; 40 managers and entrepreneurs have already graduated from this program. We also have a Department of Cultural Commerce, which is providing advice and consulting services in the marketing of services and cultural goods.

“ We have implemented a series of measures to establish strategic alliances for the success of cultural and educational management. “

The country has become a member of the Executive Board of UNESCO for 2013-2017. What are the reasons that drove your candidacy?

To become a member of the Executive Board of UNESCO and President of the Council is a great honor for our country, and it means that the Dominican Republic will be a key player in the definition of the strategy and projects of this international organization, recognizing also the country’s competencies and contributions to areas such as education, science, culture and communication. We aim at opening a common space for cooperation with UNESCO and its members, strengthening South-South and North-South-North cooperation with our country. In 2014, the Dominican Republic has the Pro Tempore Presidency of the Forum of Ministers of Culture and Education of the Central American Integration System and UNESCO’s position will also serve to ensure regional representation.

How relevant is the UNESCO Juan Bosch Award for Social Science Research in further promoting research in the country?

Social sciences and research, as a means implement public policies in the areas of competence of UNESCO, have received a special mention and boost at the public level. In the last edition, a Colombian woman who presented a paper on youth violence in Guatemala was awarded the prize. These investigations made by young people clearly promote research, enhancing public policies of UNESCO members. In addition, it is a high honor for the Dominican Republic that this cathedra was named after the famous Dominican scholar Juan Bosch, an international recognition of his work.