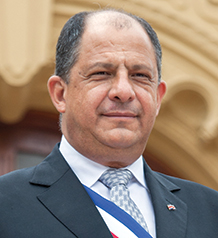 Share on:
TBY talks to HE Luis Guillermo Solí­s Rivera, former President of Costa Rica, on the importance of the diplomatic relationship between the two countries.

Costa Rica and Ecuador have long enjoyed mutual promotion and protection of investment. What are the current and future conditions of investment flows between the countries?

Costa Rica and Ecuador do not have any current reciprocal protection or promotion agreement in regards to investment, or a free trade agreement. Between 2007 and 2009 $14.2 million in foreign investments in the real estate sector came from Ecuador. Between 2010 and 2013 there were no investment from this country. In the third quarter of 2014, we registered direct foreign investment flows from Ecuador for $19.5 million, also in the real estate sector.

Costa Rica will celebrate its third summit of the CELAC at the end of January. What is the perspective on the transfer of the presidency to Ecuador?

During the year that Costa Rica held the temporary presidency, we managed to agree on 50 declarations during the last semester. We also had a very productive leadership. We established effective mechanisms for dialogue in the region and with the region’s partners, for example our meeting with China. During the summit, the commitment to implement the food security plan was consolidated in order to eradicate famine by 2025 and a plan to end illiteracy in the country was generated. Working together in these processes will be the key to success. The Community of Latin American and Caribbean States (CELAC)’s voice has to be heard and valued in the international arena, contributing new experiences to influence fresh results. What is at stake concerns us all. It is about the development agenda that will guide humanity till 2030. CELAC’s value is in its provision of a medium for dialogue and the influence that we manage to have in our political integration and in the ability to conciliate positions in diverse and urgent matters such as the environment, human rights, and nuclear weapons. In maintaining these scenarios and in working together lies our vision for our continent’s future.

How will Costa Rica joining the Organization for Economic and Cooperation Development impact commercial ties with the international community, and in what sectors will it propel growth the most?

The OECD is an assembly of 34 countries and its objective is to encourage policies and strategies for improving social and economic conditions of people around the world. As we know, this supports the objectives of this administration: providing better living conditions, social inclusion, work, education, environment, health, and housing for all men and women in Costa Rica. For this, we have propelled our national development plan and, from day one, we have focused on the recovery of social policies neglected in our country for the past 30 years. In other words, redirecting public policies towards those in need, dealing with extreme poverty, and reactivating the internal economy. This administration immediately prioritized Costa Rica’s entry to the OECD. Becoming a member will give a frame of reference that will undoubtedly facilitate many investments through the application of good practices in our productive model. This will make it easier for us to become a modern and competitive economy. Direct foreign investment, thanks to the talent of our productive force, will position us with great advantage for the creation of commercial and economic ties with several countries. We hope to encourage the same sectors and areas that we have been working on and committed to since the beginning: the productive sectors, the environment, human rights, employment generation, energy, agriculture regeneration, transparency, the fight against corruption in civil services and the development of infrastructure. At the center of this government is the encouragement of economic development and, at the same time, enrichment, improvement, and strengthening of the quality of public management for the benefit of all Costa Ricans. We are aware that by the end of June, when we hope to have our candidacy approved, we need to have improvements in the plan of action that, as a country, we carry out through the work of 27 ministries and public institutions involved. These actions allow us to compare our conditions with those of other member countries in key areas, considering what I have previously mentioned: public policies, efficiency and transparency in internal markets, the functioning of the productive apparatus, productivity, competitiveness and the inclusive growth we aspire to.