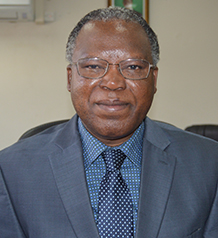 Siazongo D. Siakalenge has served the government of the Republic of Zambia for over 30 years. He has been the Permanent Secretary for the Mianistry of Commerce, Trade and Industry since November 2013. In addition to other government positions, he served as Director of National Planning under the Ministry of Finance and National Planning in Lusaka from 2011 to 2012, while he also served as Director of Human Resources and Administration and as Controlling Officer, the Ministry of Finance and National Planning from 2011 to 2012. Siakalenge holds a MSc in National Development and Project Planning from Bradford University, UK. Prior to obtaining his Master’s degree, he obtained a Post Graduate Diploma in Development Economics from Victoria University of Manchester, UK, in 1987. His Career at tertiary level started with a BA in Economics obtained from the University of Zambia in 1983.

Share on:
TBY talks to Siazongo D. Siakalenge, Permanent Secretary for the Ministry of Commerce, Trade, and Industry, on the transformation of investment-related regulation, the role of the MFEZs, and Chinese investment in the country.

How has Zambia’s competitiveness evolved in the past year?

Zambia started addressing important issues related to its regional competitiveness in 2003. At that time, the country had to engage the World Bank and the IMF regarding leakages in the economy. Both organizations were of the view that our investor-related legislation required urgent tightening. Zambian Export Processing Zones Authority (ZEPZA) the Zambia Investment Centre were not conducive to effective Trade and Investment, which allowed for the above mentioned leakages. As a result, the Zambian government, together with the World Bank and the IMF, agreed on the Private Sector Development Program. The program featured eight or nine action points, which led to certain reforms being carried out. One of these called for the merging of the five promotional agencies within the Ministry of Commerce, Trade, and Industry to create what today is the Zambian Development Agency. The five institutions merged were the Investment Center, the Export Board of Zambia, the Small Enterprise Development Board, the Zambian Privatization Agency, and the Zambian Export Processing Zones Authority. The need for the reduction of the cost of doing business took center stage as well. Major legislative reforms were carried out. Additionally, fees and levies had to be addressed in order to reduce the cost of doing business. Therefore, while the business community had been facing unpredictable fees, today effective regulation is in place. To date, we are talking about the Business Regulatory Review Agency (BRRA), which ensures that no new levies or taxes are put in place unless justified.

How would you describe the evolution of the Multi-Facility Economic Zones (MFEZs) and their role in achieving the three objectives of the Triangle of Hope?

Around 2005 to 2006, we started looking at the “Triangle of Hope,” and within that began seriously looking at issues of infrastructure development. Most would-be developers are reluctant to enter Africa on account of inadequate infrastructure. Therefore, we set about improving infrastructure to international standards. We started with the Lusaka South Multi-Facility Economic Zone by coming up with a master plan where we deliberately indicated that we would meet international standards in the provision of roads, water sanitation, power, and ICT as well as solid waste management. We wanted world-class energy provision where we supply power from three power sources, such that if one power source went down, there would be no interruption of supply. We had to factor in enhanced ICT provision to international levels. This does not discount what the private sector itself is doing. In 2006, the then-president of China Hu Jintao read out eight measures to a summit for Sino-African cooperation commonly called Forum on China/Africa Cooperation (FOCAC), one of which was a measure regarding the development of multi-facility economic zones in five countries, with Zambia selected as the pilot country. As a result of that, we now have multi-facility economic zones in the Copperbelt and Lusaka East. In the two zones promoted by the Chinese government, around 48 enterprises have already been established. They are already in a position to realize exports worth up to about $500 million. Moreover, they have created close to 8,000 jobs for Zambians on a total investment of $1.4 billion. In terms of infrastructure established at the zone, $177 million had been dedicated to a 20km stretch of road in Chambishi MFEZ. Of course, power supply is already in place, and hence, the infrastructure there is already highly competitive and second to none in the world. Businesses should certainly take advantage of the infrastructure available in these multi-facility economic zones.