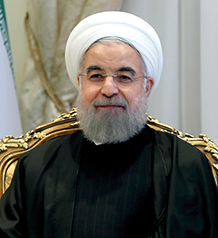 Dr. Hassan Rouhani was born on the November 12, 1948 in Sorkhe (Semnan province, Iran). He is a lawyer and a Muslim cleric. Prior to his election as President of the Islamic Republic of Iran in August 2013, Dr. Rouhani was the Representative of the Supreme Leader to the Supreme National Security Council and a Member of the Assembly of Experts, being the head of the Political and Social Committee. He holds a PhD in constitutional law from Glasgow Caledonian University (UK) and has published around 100 books and scientific papers.

Share on:
Dr. Hassan Rouhani, President of the Islamic Republic of Iran.

Employment is the most important issue of our country, and unemployment can be a major problem for our society and country. A collective effort to create jobs in the country is essential. The total number of employed people in Iran in 2013 was 21.3 million people, a figure that has now reached 23 million. In the last two years, 700,000 net jobs were created, though we are far from meeting the entire demand. The Resistive Economy Headquarters have provided loans for 17,000 industrial units. Growth in the agriculture sector was 5.9% in 2016. Non-oil goods exports reached USD32 billion in the final nine months of 2016. The final part of our commitments under the Joint Comprehensive Plan of Action (JCPOA) will be finalized on its anniversary.

We honor our commitments under the JCPOA and hope that the other side does so as well. We hope to witness economic growth in all countries, especially those we have interactions with. The result of the JCPOA is a win-win situation that is beneficial to all, and I hope all countries are able to witness its positive results in the coming years. I have no doubt the JCPOA was the largest achievement of the great Iranian nation. Negotiating with six world powers resulted in a great achievement and we reached a conclusion which no one can claim Iran lost out. Iran did not deceive the negotiation partners. We said from the first day of negotiations that this agreement would be a win-win situation.

The JCPOA has been completely implemented and executed. In the nuclear sector, we have operationalized everything we wanted; currently, we have imported 200 tons of Yellow Cake and will import another 120 tons. We have signed a contract to purchase 200 airplanes, which was impossible without the JCPOA. Purchasing airplanes does not impose expenses on the public budget of the country. The 18-year repayment of the airplane sale indicates the global community’s trust in Iran.

Our enemies and opponents promoted Iranophobia, introducing Iran as a threat to the world. Today, however, countries globally acknowledge the significant role Iran plays in the region. In the resolution of the Security Council on Syria, Iran’s positive role in combatting terrorism in the region was acknowledged. Today, helping Iran in its nuclear sector is on the agenda and this means that different European countries and Russia are helping us produce fuel for our reactors, as well as other nuclear sectors, which leads to growth and progress in our nuclear sector.

We have spared no effort in helping countries combat terrorism and we will continue to do so. In Yemen, Syria, and other countries that face crises, the ultimate solution is diplomacy. I hope the Astana Meeting represents a major landmark for the region. In the field of diplomacy, we have been active and are in touch with Syria, Russia, Turkey, and other countries in the region in this regard. A tripartite relation was formed between Iran, Russia, and Turkey, along with Syria, and these countries have been able to take great steps. We hope the people of Syria, Iraq, Yemen, Bahrain, Libya, and other countries that are struggling with problems will be safe and secure, and that stability will be established in the region. In general, the current conditions of the region are positive, though we have a long way to go to reach full security.

I feel deep sorrow over the terrorist attack in Turkey in December 2016. Such incidents show that terrorists have no mercy on anyone and this virus will infect everyone, unless we can confront and eliminate the virus. I am pleased we have extraordinary security in our country. I thank all the armed and security forces for the extraordinary security they have provided the Iranian nation. People should play a role in the realization of citizenship rights. We should promote unity and brotherhood instead of defamation and slander.