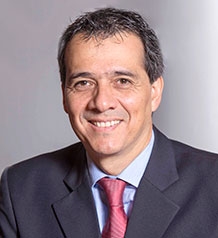 Alonso Segura Vasi studied Economics at Pontificia Universidad Católica del Peru, and has a master’s degree and doctoral studies in economics from the University of Pennsylvania in the US. Even before taking office, he served as Chief of Cabinet of Advisors of the Ministry of Economy and Finance, as Chairman of the Special Committee of Public Investment Projects of the Agency for Promotion of Private Investment — ProInversión, and Director of the Development Finance Corporation (Cofide). He had previously served at the Economic Research and Investment Strategy Credit Bank of Peru, and as advisor to the Executive Director for the Southern Cone Chair and officer in the Fiscal Affairs Department of the International Monetary Fund, among others.

Share on:
"We are aiming to standardize the tax system to OECD averages."

Peru’s GDP growth slowed to 2.4% in 2014, the lowest since the financial crisis. What fiscal measures can the government use to stimulate growth over the coming year?

The current market and multilateral agency forecasts predict that Peru will lead growth among the LA6 economies (Brazil, Chile, Colombia, Mexico, Peru, and Uruguay) in 2015, amid challenging international headwinds. According to the April 2015 survey by Consensus Forecasts, Peru accelerated from 2.4% in 2014 to 3.7%, followed by Chile (from 1.8% in 2014 to 2.8 %), and Mexico (from 2.1% in 2014 to 2.9%). Colombia decelerated from 4.6% in 2014 to 3.4%. We expect that primary GDP will contribute with 1.2 percentage points to economic growth in 2015, while fiscal policy will contribute 1 percentage point. Peru is using various tools to stimulate aggregate demand, such as an expansionary 2015 Public Budget, tax reduction for firms and households of 0.7% of GDP, Public Financial Management (PFM) measures to flatten the learning curve of incoming subnational authorities in order to accelerate public spending at a subnational level, and easing the pass-through from international oil price reduction to domestic prices. The country will also increase the amount of resources allocated for public infrastructure maintenance in subnational governments to 0.2% of GDP, and issue sovereign bonds to finance prioritized public investment projects and other additional measures to increase public spending. The government has recently proposed measures to boost private consumption with a potential economic impact of 0.7% of GDP, and temporary exemption on social security and pension contributions for salaries. The temporary availability of a fraction of the Unemployment Insurance Deposits Surplus (CTS) extension of measures on fuel price stabilization frameworks will also help, in addition to a price range system for selected agricultural imports, which has already been approved by Supreme Decree.

What steps is the government taking to encourage economic diversification and reduce dependence on commodities?

The IMF has cut its GDP growth forecast for 2015 for the world and much harder for EM, with the biggest revisions made for Latin America and the Caribbean from 2.2% in October 2014 to 0.9% in April 2015. Peru has considerable mineral reserves and commodity potential, and is one of the leading countries for mining in the world. In Latin America, it is the number one gold producer and the second copper producer. The sector accounts for 12% of GDP and represents 55% of total exports. Despite the current metal price shock, the mining sector will remain one of the key engines of the Peruvian economy, while the introduction of new projects such as Toromocho, Constancia, and Las Bambas, as well as extensions such as Cerro Verde will bring more production and new investment opportunities. To reduce the dependence on mining for fiscal revenue, the Peruvian Government has been working to broaden the tax base and increase the number of taxpayers and offset the fall in metal prices since 2011. In addition, the new macro fiscal framework is separating public spending from the volatility of commodity prices. The influence of resource-related revenues in the planning of public spending was lowered through this new macro fiscal framework. With this new institutional framework, fiscal policy is in line with international best practices for commodity-exporting open economies. In Peru, the process of industrialization continues beyond the extractive industries. For example, in the non-traditional sector, between 2000 and 2014 the number of products exported at a value of at least $10 million has increased fourfold from 35 to 144 products. In the same period, the chemical industry recorded a fivefold increase in the export of medicines, perfumery, and personal care products. In addition, between 2002 and 2013 the number of destination countries increased from 145 to 174, and the number of exporting companies increased from 4,513 to 7,782. Finally, over the past decade, the total contribution of productivity to potential GDP growth was 2.4 percentage points.

Peru has been praised in recent years for its pro-business reforms. What do you see as the next steps in this regard, and what longer-term reforms are necessary?

We are aiming to standardize the tax system to OECD averages and reduce excessive tax related costs, streamline procedures and eliminate obstacles and other “transaction costs” for the investor, to boost investment, productivity, and employment, and to increase predictability regarding regulatory costs. Also, Peru’s accession to the OECD will serve as a trigger for structural reforms. Peru is already part of the OECD’s Country Program. The OECD established Country Programs as a new instrument for supporting dynamic, emerging economies in designing their reforms and strengthening public policy. In November 2014, the OECD’s Foreign Affairs Committee unanimously approved Peru’s Country Program 2015-2016. The working areas of the program include barriers to economic growth and development, public governance, and the improvement of the institutional environment, strengthening transparency and fighting corruption, and fostering human capital and higher productivity.

What steps is the government taking to encourage SMEs to integrate into the formal financial system?

Peru recognizes the importance of SMEs in the growth and economic dynamics of the country. In this regard, the various policies aim to minimize the asymmetries and distortions in the market with regard to access to financing and the resolution and mitigation of information problems and transaction costs, among others. The main measures include strengthening of the Alternative Securities Market, the Micro, Small, and Medium Enterprise (MSME) fund.

The Alternative Securities Market has also been strengthened, and in June 2013 the regulatory framework was improved with the passing of a law to promote the entry of new issuers and improved market efficiency, which has enabled companies to access longer and medium term funding at lower costs. It should be noted that this market targets small and medium enterprises with the ability to issue debt or equity capital in the capital market, with lower costs and fewer requirements than larger companies.

Peru is cited as having an infrastructure gap of between $30-80 billion. What role can fiscal policy play in accelerating infrastructure development?

Peru is actually working to boost investment to reduce the infrastructure gap through the increased use of Public Private Partnerships (PPPs) to finance infrastructure projects, subject to an ex-ante evaluation of underlying fiscal risks, the strengthening of inter-institutional governance for investment, and unlocking of infrastructure projects delayed by red tape and permits. The Ministry of Economy and Finance together with Proinversión have established mechanisms for technical assistance to public entities. The Ministry has control over the fiscal implications of every PPP contract. Additionally, the definition of PPPs has been expanded to other services related to public services and infrastructure, as well as to projects in the field of applied research and technological innovation. There is also a better definition of the term “cofinancing,” which today refers to any use of public resources and involves the operation phase of the project. Today, investors have the opportunity to submit what we call “Co-financed Unsolicited Proposals” during the first 45 days of each calendar year.