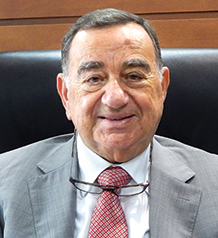 Jack Btesh H. relocated to Panama in 1950 from Lebanon. His family has been established in Panama since 1940, and started their business in 1952. Ben Betesh International initiated operations selling textiles and making custom suits.

Share on:
TBY talks to Jack Btesh H., President of Ben Betesh International, on developing a retail presence in the country, working with international brands, and the potential of the new airport and other expansion opportunities.

How has the company evolved over the years to become one of the main institutions in the sector?

We founded Ben Betesh in 1959. That is 55 years ago, and later we started doing business with Europe. In this time we were selling yard wool and making suits and custom made trousers. After that we started bringing ready made wear to Panama. We started in 1968 with Lacoste and then we introduced Marks & Spencer. We worked with them for 32 years, from 1968 to 2000. We represent Lacoste in Mexico and in all Latin America, except for Mercosur. The company has been growing significantly since 2000-2001. We have a solid infrastructure in Mexico, where we own 22 shops, and we have infrastructure in Peru, Lima, with 10 shops, two Lacoste and eight Crocs. We are very keen in retail, as that is our specialty.

How would you assess the status of the retail sector in Panama today?

The sector has a lot of potential, but we are facing some challenges. The new government has not defined any policies, and we are in limbo now with no direction. Moreover, the entire Latin American region has some problems: devaluation, recession, and a high tax on imports are having a strong impact on the Panamanian economy. Panama provides services to all of Latin America. In the Colón Free Zone, sales have been down by about 35%. This is a friendly zone, and a lot of the businesses closed. In Colombia, which is the best customer for Panama, they raised the duty on textiles, in shoes. The situation in Venezuela is not good, as the country owes Panama $800 million. Peru is stable, and Chile is an exception, as it is the only country in South America that is safe now. Brazil is complicated, as it is very hard to do business there right now. Ultimately, the market in Central America is limited.

How do you intend to capitalize on the planned expansion of the Tocumen Airport?

We have been in the airport for 50 years. The new airport is coming in 2018. There will be a new area, and we will be there. There is about 3,000 or 4,000 square meters for commercial development. Lufthansa is coming in November, connecting Frankfurt to Panama. We already have KLM, Air France, and Iberia, and Copa has been growing fast. Panama has turned into the shopping center for Latin America. Last year, the sector slowed, and the number of tourists declined. We have tourists, but with limited tourism budgets. Before, people would come and shop with up to $4,000, but not anymore. And at the same time, at the airport, our sales declined in conjunction with less traffic. In 2013, 13 million passengers come through the airport, and in 2014, we had between 12 million and 13 million. And this year is going to be a bit slow. The visitors to the airport are internationals, familiar with international brands such as Lacoste, Bally, Harmont, Blaine, and Crocs. But for Latin Americans, because of the currency devaluation, these products have become prohibitively expensive. To give some context, the Colombian peso has devalued against the dollar by 35% or more, while Peru experienced 20% devaluation. In 2014 and 2013, we attracted considerable Brazilian clientele when their currency was at 170 to the dollar—today its 320. The knock-on effects for Panama are clear. This is due to the devaluation.

Where do you plan to consolidate your presence?

Colombia is one of our targets, and Peru is another one. Ecuador is hard to do business in. In Central America, we have businesses in Costa Rica, Honduras, Nicaragua, El Salvador, and Guatemala. Mexico is another key market. We have a joint venture there with Lacoste as well as with another partner. We enjoy good relations with all the department stores, which is the main business generator in Mexico. Meanwhile, we have several new brands in Mexico: Harmont & Blaine, Scotch and Soda, and John Varvatos. We also plan to expand to Chile, and are currently looking for a partner.