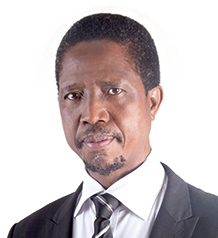 HE Edgar Chagwa Lungu was born in November 1956 and is a lawyer by profession. His education was taken at the University of Zambia, and he had a distinguished career in the military before joining politics. As a member of the Patriotic Front (PF), he served as MP for the Chawama Constituency, Minister of Justice, Minister of Defence, and now President of the PF and the Republic of Zambia.

Share on:
TBY talks to HE Edgar Lungu, President of the Republic of Zambia, on priorities for his mandate, the SADC and UN, and draft amendments to the national constitution.

What are the key priorities established by your government for 2015-16?

Our economic development agenda has been guided by the National Vision, which foresees Zambia becoming a prosperous middle-income country by 2030. My government is determined to ensure that Zambia’s socio-economic status is improved in an effort to raise the living standards of our citizenry. Our focus is not simply for the period 2015-16, but for the long term, and for this reason my government has prioritised agriculture, tourism, manufacturing, energy, water development, and mining. We also aspire to be a developed country by 2064 through a transformational agenda which prioritises seven key areas: diversification and sustainable development; infrastructure development; human capital development; democracy and good governance; gender and social protection; economic diplomacy, and global partnerships and national and cultural re-modeling. Sustainable national development has also been a central priority for our nation. The record of our diversification programme over the past 50 years has not been satisfactory. As a country we have continuously depended on copper production with about 80% of our export earnings still coming from this mineral. Copper highly exposes us to the dynamics of the fluctuations of copper on the global market, so we are clear that we have to diversify away to other priority economic areas such agriculture, tourism, manufacturing, and infrastructural development in order to stimulate economic growth.

Investment opportunities abound in other areas, but the success of diversification lies in the prioritisation of development. For this reason, we need to focus on promoting tourism and value addition to the mineral and agricultural products which have the greatest potential to contribute to rapid economic diversification. We should also be cognisant of the fact that our diversification agenda will not be complete without agro processing. Our manufacturing sector must be driven by growth in agro-processing and forestry products ensuring that we do not export raw materials and add value to all our primary products. In the area of infrastructure development, as we discuss economic development we cannot ignore this important subject. My government’s goal is to ensure that Zambia becomes the preferred transit point in the region. To achieve this, the government is investing in road, rail, air and water transportation. A transport master plan is being devised to ensure that the development of the transport system in Zambia is done in an integrated manner linking airports, harbors, dry ports, and trade centers. This will easily guarantee the transportation of goods and services to markets within the country and beyond. With specific reference to the road sector, the government will accelerate the implementation of road projects under the Link Zambia 8,000 project inter alia, as a means of improving connectivity and transportation of goods and services. This will be done by utilizing PPPs to finance selected roads. I wish to also highlight the industrialization program we are implementing under the Industrial Development Corporation (IDC) as part of the overall transformational agenda. We believe that our economy must progressively be controlled by citizens, with broad-based citizen economic empowerment and interventions that will ensure that citizens have significant control of economic activities in the agriculture, tourism, and manufacturing sectors. This will be achieved through joint ventures between foreign investors and citizens.

How would you describe the importance of a harmonized legal framework in the SADC region to promote international trade and commerce among its members?

Zambia is a member of the SADC, and together with other member states have set themselves ambitious economic objectives. There are attempts by member countries to integrate their markets gradually through a commitment to reducing trade barriers in goods and services, and aligning their economic and financial policies. In this regard, a free-trade zone has extended across the region since 2008, enabling the duty-free trade of goods. Negotiations are now underway for the liberalization of trade in services in a number of sectors. Since coming into force, the SADC Finance and Investment Protocol (FIP) has provided a legal framework for the regional harmonization of finance and investment policies. Alongside the SADC Secretariat, which acts as coordinator and manager of the regional integration process, Member States are responsible for putting regional rulings and decisions into effect at a national level. At the same time, representatives of the private sector also have an important part to play. Their inclusion in the strategic and thematic discussions of various aspects of integration ensures that the discussions and ultimately decisions made respond to the needs of the private sector.

Zambia hosted the Joint Committee on UN Reforms in Livingstone and recently received the visit of Helen Clark, the Administrator of the UNDP. What role would you like Zambia to play within the UN institution?

Zambia has been a member of the UN for the last 50 years hence our partnership with this global body is key to our country achieving economic growth and development. This commitment by the UN to Zambia is shown through the high level visits to Zambia of UN officials. Zambia is greatly honored to have hosted the second Summit of the African Union Committee of Ten (C-10) Heads of State and Government on the Reform of the United Nations Security Council in May this year after the Summit that was held in Oyo in the Republic of Congo in 2014. The Summit sought to examine developments in ongoing Inter-Governmental Negotiations on the Security Council Reform process among other topics. Zambia’s hosting of this Summit is an indication of the role that we ought to play in ensuring that the aspirations of this Committee are achieved. During the Livingstone Summit l underscored the need for us to again demand that Africa be heard and granted its place at the Security Council table. Seven decades of the UN has been incomplete without Africa’s participation in the Security Council. Around 70% of the Security Council agenda is on Africa, but the continent remains the only region that is totally excluded from making decisions on issues affecting it.

What are the general improvements to be contained in the draft constitution that would be subject to referendum in 2016?

My government is committed to delivering a people-driven constitution. The final draft constitution was released to the general public in October, 2014 to enable them study it and make comments. As a follow-up, the government has published the Constitution (amendment) Bill, 2015 containing non-contentious clauses, and is scheduled for presentation to parliament. I urge all Zambians to take keen interest in this Bill and engage their members of Parliament to ensure that their views are well-represented and taken into account when the debate begins. The decision to present the non-contentious clauses for enactment by Parliament is informed by the real danger of losing even the progressive and non-contentious provisions of the draft constitution if the entire document was subjected to a referendum. To demonstrate the government’s commitment to delivering a people-driven constitution, the Referendum Act has been amended in anticipation of the referendum, and will be held concurrently with the 2016 general elections. This amendment expressly mandates the Electoral Commission of Zambia to be the Referendum Commission and institutionalizes the way in which future referenda will be conducted. Further, it is necessary to hold the referendum alongside next year’s general elections to enhance the chances of success and also to make the whole process more cost-effective. If these improvements are passed, the election date will be enshrined in the Constitution, but will not be part of the referendum since it is not in the Bill of Rights. A proposal to allow Dual Citizenship will also be approved by referendum, while the threshold for winning Presidential elections will be set at 50% plus one vote, and will not require a referendum. Finally, the Bill of Rights has been improved, and this will also involve approval by referendum.