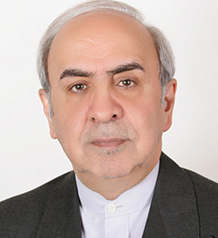 Deputy Minister, Industry, Mine and Trade

Dr. Mansour Moazami is the Deputy Minister of Industry and IDRO’s Chairman of the Executive Board. During his long experience in the energy sector, he was the Deputy Minister of Petroleum and Advisor to the Minister, CEO, and Chairman of National Petrochemical Company, Khark Petrochemical Company, and Iran LNG Company. He was the Iranian ambassador in Brazil and Bolivia. Dr. Moazami holds a PhD in business administration from Shahid Beheshti University, a MS in industrial engineering from Amir Kabir University, a MA in public administration, and a BS in chemistry from the University of Isfahan. He has been teaching in several Iranian universities and academic centers since 1987.

Share on:
TBY talks to Dr. Mansour Moazami, Deputy Minister of Industry, Mine and Trade & Chairman of the Industrial Development & Renovation Organization of Iran (IDRO), on negotiating with foreign companies and his positive outlook for the future.

What has been the role of IDRO in the development of the industrial sector?

IDRO was established in 1967 after the country began to industrialize. It is an organization with a long history that has played a major role in improving and promoting industry in Iran. This organization started to work 50 years ago when there was no industry in Iran, and now we have seen just how this sector has grown. We have conducted many projects that can be divided into two parts: industrial development and the expansion of organizations. IDRO supports the private sector and takes part in a maximum of 20% of its projects or activities, so companies remain completely private. In addition, as the government is supporting knowledge-based companies, we focus on technological companies that need financing, do not know the market, or have management problems. The third thing we do is training and education for managers through the Industrial Management Institute (IMI), one of our subsidiaries. IMI is responsible for educating world-class managers and is negotiating with five world-recognized business scholars and universities. Finally, we also do company restructuring, mostly for medium and small businesses with liquidity and management problems. Based on the laws of the country, the government takes control of the company and gives it to IDRO, and we have a responsibility to help them.

What are the main sectors where you focus your activities?

Based on my experience as Deputy Minister of Petroleum, one of IDRO’s biggest priorities is the oil and gas sector. We have conducted many good negotiations with foreign companies to cooperate at the same level. We do not want foreign companies to just come and sell their products in Iran. For example, we negotiated with Citroí«n to sign a joint venture with Saipa. Citroí«n would bring hard currency, and Saipa the location, heavy equipment, and human resources. Based on this joint venture, Saipa will produce a new model of Citroí«n to be sold in the local market and export 40% of the production. In the petrochemicals sector, we negotiated with German companies to sign an agreement and establish huge complexes. According to our policies in all sectors, foreign companies cannot bring finished products and have to cooperate with local companies to produce in Iran.

What is your outlook for the growth of industry in the post-sanctions era?

After the sanctions, there is a great opportunity for Iran to grow. We try to look forward and not think about the past anymore. I am optimistic and certain that European countries will encourage their companies to come to Iran. Less than five months after the signing of the JCPOA, many foreign companies came to invest in Iran and some have signed important agreements. In one year, we will solve many problems, as European banks get over their fear of investing and trading with Iran. Europe is the most interesting and biggest market for our country. It has to understand the abilities of our country, our deep cultural values, and our young and well-educated society. Iran is completely different from the nearby countries in the Middle East.

What are your expectations for this year?

We have enough time until the end of the Iranian year to achieve our goals. We will continue to focus on the oil and gas market, including railway and shipping line transportation. We have one of the biggest companies for ship manufacturing in the Middle East, called Iran Shipbuilding & Offshore Industries Complex Co (ISOICO). We signed an agreement with our users, the National Iranian Tanker Company (NITC) and the Islamic Republic of Iran Shipping Lines (IRISL), to establish a joint venture to send tankers to foreign countries, mainly India and Europe. We are also negotiating with European shipping lines for ship manufacturing. Moreover, IDRO has a good chance of participating in IPC contracts with foreign companies to develop Iranian reserves. We also have four tire and rubber companies with a capacity of 50,000 tons per annum and are now investing USD5.6 million in its expansion.