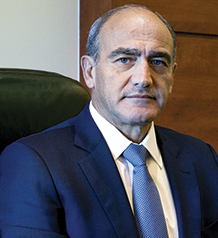 Anwar Jammal is the Chairman & CEO of Jammal Trust Bank (JTB) A University of Westminster MBA graduate with more than 30 years of experience in the banking and financial sector, he practiced in different institutions and headed several committees before joining JTB, where he climbed up the ladder, taking incremental steps toward the highest position by combining a mix of professional leadership and business strategy. He was elected Chairman/General Manager in 2005 after his late father, founding Chairman Mr. Ali Jammal.

Share on:
TBY talks to Anwar Jammal, Chairman & CEO of Jammal Trust Bank (JTB), on its contributions to the economy, working with SMEs, and the outlook for the coming years.

What have been the major contributions of JTB to the Lebanese economy since you were first established?

We have been part of Lebanon for over 50 years, providing financial services to a wide array of customers. Lebanon has a large number of people working in the informal sector, in what is often called the “grey economy.” When we talk about the informal economy, we mean those small family businesses and micro-shops that are not formally registered on government books, but still have their fair share of economic development in the country. JTB has been there since the outset to actually support these promising micro-firms; this has been our major contribution to the overall economy.

How has your customer-sensitive approach set you apart from other banking institutions in Lebanon?

There is a popular birthday wish in Lebanon: “We hope you live to be a hundred years,” which we often apply to entrepreneurs opening a new business in the form of “We hope you become the largest in your sector.” For JTB, this has never been the case. Since its emergence, the bank has never aimed to become the biggest player in the financial sector, nor to become the largest bank. Stretching our capacities to these spheres would make us lose our ‘uniqueness’ and force us to treat our customers as just numbers rather than individuals. Something that still makes JTB what it is today: to serve people. We want to have a genuinely personalized approach to banking; something that has gotten lost in most places around the globe.

How has JTB promoted microfinance, and what benefits does the banking segment bring?

We were the first bank to introduce micro-credit into the Lebanese market. We started this segment 17 years ago serving the unbanked; those who would recur to their neighbors or friends to borrow cash and who would end up paying back multiples of what they initially borrowed. We approached those people who were skeptical of dealing with banks, and we encouraged them to abandon their taboos of not using banking institutions for their financial needs. It is of relevance to mention that microfinance is often confused with the microcredit you can obtain from a retail shop to purchase a determined item. As opposed to microcredit that only aims to improve people’s livelihood, microfinance aims to lend money to people to develop their businesses and improve their livelihood.

Considering 90% of Lebanese companies are SMEs, has JTB found its niche market in this segment?

One of the characteristics that is constantly overlooked about the SMEs operating in Lebanon is that only around 50% of them are officially registered on government books, with the rest operating informally but still contributing enormously to the economy. Throughout JTB’s history we have catered to all those small businesses in Lebanon and effectively managed to migrate them from the unbanked group to the bankable group of businesses; and they flourished. It has been a demanding journey and we, at JTB, are proud of every step, every touch point, and every turning point. A journey some large banks decided to shy away from, there is a know-how, an appetite, and a certain finesse required to do business with these small firms.

Looking ahead, where do you see JTB going in the next two years?

We will move up a few notches in the industry but never pass the 15th position in the overall banking sector ranking. This is because of the reasons I explained before that set us apart from other players in terms of customer satisfaction and how we approach them. Our slogan “We Speak Your Language,” remains as strong and as real as ever. That does not mean I do not dream big. I would like to see JTB move abroad to other markets in Africa and in Europe to serve our clients needs there. We have big plans for the future, but with cautious steps as we have always been.