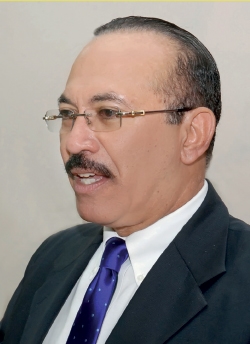 Luis Ramón Rodrí­guez Peña graduated in agricultural engineering in 1976, after concentrating on agribusiness in the ISA-UCMM University Program. He went on to study in the University of Hawaii where he received his Master’s degree in Entomology and pesticide toxicology. He has also received a diploma in finance from the Wharton School of Business in Pennsylvania. Following an academic career spanning more than two decades, he was designated as Sub-Secretary of State for Livestock of the Secretary of State for Agriculture. In this capacity he represented the interests of this sector in international negotiations for many of the Dominican Republic’s FTAs, before pursuing private consultancy opportunities until 2012.

Share on:
What underlies the strategic thrust of the key agriculture sectors in expanding their capabilities and successfully adapting them to the changing economic environment? The agricultural development program that is running […]

What underlies the strategic thrust of the key agriculture sectors in expanding their capabilities and successfully adapting them to the changing economic environment?

The agricultural development program that is running the government of President Danilo Medina seeks to strengthen the food security and nutrition of the population, the expansion of agri-food exports, the alleviation of rural poverty, and the modernization of the sector’s public institutions. To achieve these goals, the primary effort has been the provision of credit to finance the production of staple food crops such as rice, beans, onion, garlic, and milk and export crops such as cocoa, bananas, and fresh vegetables. It is also financing the installation greenhouses, vegetables export, and others. Similarly, it has increased funding for the installation of packing and processing plants, which allow not only to add value to production, but also to ensure compliance with the export sanitary and quality standards required by international markets. This funding has been made possible through the Agricultural Bank, the Reserve Bank, private commercial banks, through the release of legal reserves, and the Special Fund for Agricultural Development (FEDA). The result of these sectorial financing programs for the year 2013 it that it is estimated that the agricultural sector will receive credits worth around Ps31 billion pesos.

The Ministry manages investments in the form of credit for agricultural production and agricultural insurance, which are often overseen in the field by President Medina himself. What is the scope of these investments and how do they favor the agricultural sector?

How important for the Ministry is investment in technology and equipment?

Many problems associated with the low level of competitiveness in the sector are mainly due to the low profitability caused by indiscriminate imports, which did not allow the adoption and purchase of equipment and technology packages that enable increased productivity, cost reduction, and, therefore, a considerable improvement of competition itself. In 2014, we have begun the process of restoring profitability to the sector, which will result in the acquisition of technology packages that will allow us to achieve the desired goal of increasing the sector’s competitiveness, as well as productive restructuring in cases where there is a lack of comparative advantages, as our response to the challenges of the free trade agreements signed by the country.

“ The heavy investments made in the sector required an agricultural insurance system that safeguards and protects against adverse weather conditions. “

This year the forecast for Dominican agricultural exports is at $1.2 billion, the country being the largest exporter of cigarettes to the US and the second largest exporter of cocoa in Latin America and the Caribbean. What other export items could be increased in the future?

In 2012, the Dominican Republic for the first time surpassed the $1 billion barrier in agri-food exports. By 2013, our estimates indicate that we will reach about $1.3 billion, leading in terms of banana exports, and being the first exporter of organic bananas, with exports of organic and conventional cocoa, fresh vegetables produced under both controlled and open-air environment, exports of fresh Asian vegetables, avocados, mangoes, and special coffees, sugar and sugar products, as well as premium cigars. This export volume must keep rising along with increased greenhouse and packing plant investments, as well as in the production of fresh fruits such as avocados, mangoes, and pineapples. We are working toward a goal of $2 billion by the end of the period of the constitutional government of President Danilo Medina.