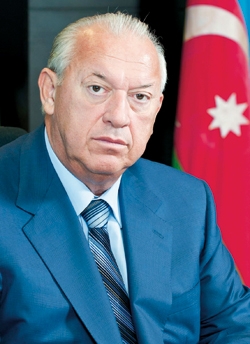 Life in the Sky

Jahangir Askerov was born in Baku in 1950, and studied Civil Aviation, and later graduated as an Engineer-Pilot from the Leningrad Civil Aviation Academy in 1980. He has had a long and successful career in aviation, and is currently the President of AZAL.

Share on:
What are your plans to increase the route network to incorporate long-haul destinations? We have a contract with the Brazilian company Embraer for the supply of six medium-haul jets, which […]

What are your plans to increase the route network to incorporate long-haul destinations?

We have a contract with the Brazilian company Embraer for the supply of six medium-haul jets, which will join the AZAL fleet in 2013. We also signed an agreement with Airbus for the supply of two long-haul Airbus A340 aircraft, the first of which arrived in Baku in January 2013. We have decided to set our sights on markets in Southeast Asia and North America. We have recently held talks with the Civil Aviation Administration of China (CAAC), which resulted in AZAL receiving the right to perform flights to Beijing. At the same time, we are actively preparing for audits by the relevant regulatory authorities in the field of civil aviation in order to obtain permits to operate flights to New York. In parallel to this, we plan to open flights to a number of new destinations in Russia, the CIS, and beyond.

How has AZAL reacted in light of increased competition from European carriers, such as British Airways, Turkish Airlines, and Lufthansa?

We firmly believe that there can be no development without competition. Although said airlines have extensive experience in international air travel and Azerbaijan’s civil aviation department is still very young, AZAL already complies with the highest standards of safety and quality of service and is not afraid of competition. This is a normal process if we take into consideration the ever-growing international authority and economic attractiveness of our country, as well as the rapidly blooming city of Baku. In essence, Azerbaijan’s aviation industry faced the same choice as Singapore in the early 1970s—to take the path of protectionism or to open its air gates to all interested foreign carriers. The choice was made in favor of the latter. Today, AZAL has strong competition from globally recognized brands from almost all directions. On the Baku-Moscow route alone there are six carriers with up to 10 flights per day. Passengers don’t have an obligation to fly with us, and the airline understands that. Such competition makes us stronger, and this largely explains AZAL’s compliance with international requirements and standards. In 2012, our flight attendants and pilots received a new elegant uniform designed in bright colors with positive elements of national ornamentation. Passengers like the new outfit, and we have received hundreds of positive reviews.

How would you describe the evolution of Azerbaijan’s aviation sector over the past decade?

It is rather difficult to embrace such a massive topic in an interview format. In the past 10 years under Ilham Aliyev’s presidency, Azerbaijan’s civil aviation has come a long way. These have been years of successful projects and impressive achievements. The replenishment of the aircraft and helicopter fleet with modern Western aircraft, the growing passenger and cargo traffic, the opening of new lines, the construction of new airports and a cargo terminal, and the opening of a modern flight training center are just a few of the positive changes that have occurred in the industry since 2003. We are optimistic for the future, knowing what a huge responsibility lies on Azerbaijan’s aviators. After all, one of our main goals is to maintain the course, pace, and dynamics laid down by the President over the past 10 years.

“One of our main goals is to maintain the course, pace, and dynamics laid down by the President over the past 10 years.”

The civil aviation sector of Azerbaijan is open to investment. A bright and fresh example of this is the new crew-training center of the National Aviation Academy of Azerbaijan. It is a joint venture with Boeing, which is a full member and investor in the project. It also shares all the financial risks with AZAL. Launched only recently in 2010, the project has proved very successful. It has already become a key institution in the region providing training to crews from Russia, Kazakhstan, Uzbekistan, Georgia, and many more countries. In May 2012, an agreement was signed on awarding the National Aviation Academy of Azerbaijan the status of an International Air Transport Association (IATA) Training Center for the “Carriage of Dangerous Goods by Air.”