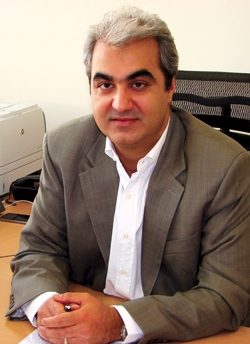 Abdollah Fateh obtained a BSc in Management from Boston University in 1995. He then went on to become Managing Director of Pars Online in 1999. Since then, he has held positions on the Board of Directors of six ICT companies throughout the region.

Share on:
Pars Online is the largest internet provider in Iran. How would you describe your company’s experience in this sector? When we started Pars Online in 1999, the internet was a […]

Pars Online is the largest internet provider in Iran. How would you describe your company’s experience in this sector?

When we started Pars Online in 1999, the internet was a new concept in Iran and the market was very limited. Initially, we began offering simple dial-up connections at 33.6 kilobytes per second (kbps). At the time, 33.6 kbps was the highest connection rate due to analog telephone line limitations. Pars Online was the first company to implement 56 kbps dial-up connectivity utilizing digital telephone lines. As the internet market matured, the Ministry of ICT began to privatize many aspects of data communications by providing various licenses to qualified private companies. Originally, the Ministry issued “ISP” licenses to a large number of companies. Subsequently, as the voice over IP (VoIP) market emerged, ICT issued VoIP licenses followed by dedicated wireless connectivity licenses.

What can value-added services bring to your company?

Now that the data communications infrastructure has reached a point where there are several million subscribers connected to a reliable network, the time has come to create and launch various value-added services in the country. Pars Online is actively working on several projects, including video on demand (VoD), voice over broadband (VoBB), and online gaming. We are always interested in partnering with companies that have been able to deploy successful value-added service projects abroad and to customize and deploy them in the local market. I believe that one of the most important issues that needs to be addressed regarding the internet in Iran is the launch of local content delivery networks (CDNs), which can be classified as a value-added service. Currently more than 90% of all of our traffic is being routed to hosts outside the country, and what we need to do is to entice Iranian content owners to host their content in the country and create a CDN that will allow us to replicate popular foreign content within our borders. Ultimately, as more internet content becomes available in the country, we will be able to reduce our international gateway costs and offer a better service to our customers at lower prices.

Which parts of the ICT sector do you think are under invested?

I think there are tremendous growth opportunities in our sector and the highest growth business is e-commerce in general. Although there are many e-commerce sites for the sale of goods, there is a distinct gap in e-commerce services in many sectors, such as travel. In general, the internet lacks Farsi content. Not everybody speaks English here, and for every English website idea, there needs to be a Farsi equivalent available. Blogging is popular here. In fact, Farsi is the third largest language in the blogging world. However, we need to create more content. It does not make sense that 90% of the traffic is leaving the country. We need to create content to keep the traffic local. There are many companies that have now launched various e-commerce enterprises, and this is the key for growth in this sector.