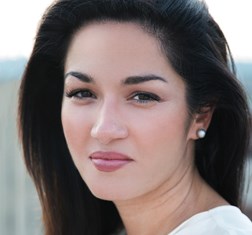 Giadha Aguirre de Carcer is the founder & CEO of New Frontier Data. She has over 20 years of experience in business execution, management, and strategic business development. She has worked in finance, research and analysis, intelligence gathering, and reporting, and as a senior strategic consultant in multiple industries in the US and abroad. She has a BA in international relations and trade from the University of Pennsylvania and a MA in international security from Georgetown University.

What is the cannabis global environment like?
There are over 50 nations that have either legalized or decriminalized cannabis. As noted in our recent The Global Cannabis Report — 2019 Industry Outlook, New Frontier Data estimates that in 2018, the global cannabis retail sales market was worth USD344 billion, with the number of legal and illegal users totaling approximately 266 million. Sales and production of hemp, the non-psychotropic cousin of cannabis from which CBD extraction is also possible, has experienced 20% CAGR for the past five years, a double-digit growth at par with some of the fastest-emerging markets in the world. While North America is still considered the epicenter of the industry, regions such as Europe and Latin America, the foundation of the cannabis market today, are beginning to take center stage. Europe now has 29 legal markets, all for medical use, and is potentially set to have the fastest-growing B2B and B2C demand for hemp and cannabis in the world. B2B demand is set to potentially increase much more rapidly as FMCG large enterprises in sectors such as beauty products, apparel, beverages, and edibles explore introducing hemp- and CBD-based products.

How does Latin America and Colombia fit into the global cannabis market?
Given the surge of demand in Europe, Canada, as one of the most mature cannabis markets in the world, has positioned itself to meet such demand. Canadian exporters, while experiencing their own domestic production challenges, have now begun to look at Latin American nations to complement its export volume to Europe, starting with Colombia. Latin American nations have optimal climates in which to grow hemp and/or cannabis, for the most part are already seasoned agro-based economies, and can offer much lower labor costs. While New Frontier Data has identified Brazil as having the largest consumption market potential due in part to its population size and current support from both government and populous for medical cannabis, countries like Colombia and Mexico present potential for faster growth in their export markets rather than domestic ones. While Europe presents the biggest export opportunity, it will be interesting to see how both Canada’s fast-increasing domestic adult use and medical demand, as well as the US potential federal legalization, may open additional exports targets and opportunities for Latin American nations.

Have there been any surprises in your cannabis market research to date?
Most recently, we have begun to assess preliminary research suggesting hemp may not only have medical applications, which continue to widen as far as conditions treatable by CBD-based medicine, but also fairly advanced industrial applications. Beyond textile production and even widely adopted soil regeneration and cleaning properties, hemp seems to also have battery life extension and conductivity properties and applications. Early research in Asia shows that carbonized hemp may be able to surpass graphene’s conductivity. While China continues to aggressively pursue a global competitive edge in all things technological, it will be important to track its potential transition from hemp cultivation for textile production to more advanced industrial applications, which would have a global socioeconomic impact.

Welcome to
Welcome to The Business Year
×
We use cookies to ensure that we give you the best experience on our website. If you continue to use this site we will assume that you are happy with it.OkPrivacy policy