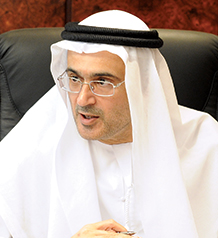 Dr. Jamal S. Al-Suwaidi is the Director General of the ECSSR, and the political advisor HH Sheikh Mohammed bin Zayed Al Nahyan, Crown Prince of Abu Dhabi and Deputy Supreme Commander of the UAE Armed Forces. He earned his PhD in Political Science from the University of Wisconsin in 1990. Dr. Al-Suwaidi has authored several books, including “The Mirage.“ He has been awarded the Legion of Merit (Commander Degree) from the late King Hassan II of Morocco and the French Order of Merit (First Class) by the French President. In 2013, HH Sheikh Khalifa bin Zayed Al Nahyan presented the “Head of State Merit Awardí¦ to Dr. Al-Suwaidi. In 2015, he received the “Knight of Arab Studies“ Award from the Arab Producers Union.

Share on:
TBY talks to HE Dr. Jamal S. Al-Suwaidi, Director General of Emirates Center for Strategic Studies and Research (ECSSR), on the organization's focus on education and research, and how to meet the labor markets needs.

When it comes to education, what are some focus areas that are important to the UAE?

Focusing on education entails focusing on educators and on the mechanisms of action for raising teacher performance and experience, as well as updating academic curricula to meet the best international standards. We need to update the curricula because the requirements today in 2015 are different from what they were in the 1960s and 1970s. We have to tackle the socio-economic constraints of the Emirati disinclination toward the teaching profession. It is also important to develop digital infrastructure in order to meet the evolving requirements of modern education, and explore future trends in educational information technologies and their possible applications in the UAE. Moreover, there is a clear relationship between educational process and labor market needs; therefore, the output of the modern education process should be compatible with the labor market. Ultimately, this will enable us to create an advanced academic environment where a culture of excellence, creativity and innovation prevails among our students and youth, leading to a productive knowledge-based society in the UAE. It is worth mentioning here that the ECSSR, since 2010, organizes an annual education conference.

The UAE embraces technology at a rapid pace compared to other countries in the region. What effect has technology had on society in the UAE?

In my book “From Tribe to Facebook: The Transformational Role of Social Networks,” I have outlined that the proliferation of social networks has led to a social shift, and this phenomenon wouldn’t have been possible without the unprecedented spread of technological advances. The UAE is an excellent consumer of technology; however, the UAE doesn’t produce technology. There is a difference. When the Cabinet marked 2015 as the Year of Innovation, it is because they want people to produce technology and know it, not just consume it. In the same context came the Smart Government initiative launched by His Highness Sheikh Mohammed bin Rashid Al Maktoum, Ruler of Dubai, UAE Vice President and Prime Minister. The UAE is highly developed compared to many countries in the Middle East, but as we embrace technology we have to be aware of the repercussions of interconnectedness and globalization.

What makes Abu Dhabi an attractive place for foreign investment in the region?

First is the stability in the UAE. As long as the UAE is able to maintain stability, foreign investment will continue to flow into the Emirates. Second is the laws that we have in place, which are supportive of foreign investment. These two factors are conducive to investment.

How do you see the ECSSR’s role in educating the public, and how are you looking to increase the ECSSR’s influence in the near future?

The ECSSR is a place where people come together and live in harmony with each other. We have people from all over the world coming here to deliver lectures. We never censor their ideas or tell them “say this, but don’t say that;” people can say anything they like. These lectures are open, we publicize them in newspapers, and invite the public to attend. The ECSSR has become a destination of choice for both lecturers and audience. As for our research and publications, we need to ensure we have a wide network of distribution. The unfortunate part is that research is like milk, if you don’t consume it on time it will expire and become irrelevant. We have excellent content; however, if we don’t tell people about it, and if we don’t publish in different languages—French, Spanish, German, Russian, Chinese, and Urdu for example—then it will remain at the local level, while we aim for global outreach. We have excellent publications, such as the most recent one Mirage, which I have published in Arabic and will be released in several languages soon. The book’s main idea is the political illusion promoted by religious political groups among Arab and Muslim nations.