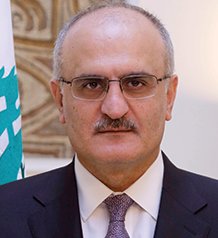 HE Ali Hasan Khalil was born in 1964. He obtained a bachelor’s in law from the Lebanese University in 1992, and practiced law for many years. He served as Minister of Agriculture from April 2003 until October 2004, and later filled the role of Minister of Public Health from June 2011 until February 2014, at which point he was appointed to his current position as Minister of Finance. He has served on a number of parliamentary committees, including those on national defense, municipalities, displaced persons, youth and sport, administration and justice, and finance and budget planning.

Share on:
TBY talks to HE Ali Hasan Khalil, Minister of Finance, on reducing the budget deficit, dealing with declining tax revenues, and the resilience of Lebanon's economy.

What were the main strategies of the Ministry of Finance to counter the deficit during 2015?

The balance of payments reversed from surpluses recorded pre-2010 due to the deteriorating security situation in the region and the repercussions this had on Lebanon. The Syrian conflict negatively impacted cross-border trade, which led the government to find alternative routes and support farmers by subsidizing the higher cost of exporting by sea freight. FDI and capital flows into Lebanon naturally followed the general mood and have witnessed some slowdown. The fall in international oil prices led to a decrease in the energy import bill with a positive effect on the current account, although the capital flows coming into Lebanon in form of remittances from oil producing countries will eventually decrease now that Gulf countries have been impacted by this trend. From the ministry’s perspective, we are always keen on managing the funding needs of the government as a whole and to structure an exhaustive debt management strategy to alleviate the pressure on Central Bank reserves as much as possible.

What have been the ministry’s actions to tackle Lebanon’s sharp decline in tax revenues in recent years?

The decline in tax collection over the past few years is mainly due to lower economic activity; we have undertaken several reform measures and policies to improve collection and facilitate payment procedures to citizens and companies. Some of these measures have implied the facilitation of tax payments through OMT and all commercial banks and the provision of e-payment services for taxes; we will also implement this service to corporate income tax soon. We have also taken measures to enforce tax payments through the confiscation of real estate properties of companies evading tax payment, tax collection from third parties, and financial prosecution of evading individuals and companies. Finally, we are in the process of implementing further measures for the collection of built property tax from tenants rather than landlords and the automatic deduction of built property tax from individual bank accounts for those who chose to do so.

What outcome do you expect from the ministry’s nationwide real estate survey, and how will it improve the property tax system?

We called for a nationwide real estate survey in Lebanon in the context of a reform plan that was launched in 2015 at the General Directorate of Land Registry and Cadastre, with the collaboration of the World Bank. The project consists of a 10-year land administration modernization program that will result in modern information technology, electronic governance, equitable property values, and geospatial data sharing; this will ultimately ensure transparency, fairness to citizens and the government, information revolution, improved decision making, improved revenue to the treasury, as well as better management of state land and a widened use of land under the law. Although the full project is spread over 10 years, the first phase will be five years, during which most reforms will be implemented and whereby the impact on government finances will materialize within the first three years.

How do the dollarization of Lebanon’s currency and the country’s large capital inflows contribute to the resilience of the economy?

Ever since Lebanon began to face internal political tensions and spillovers from the regional turmoil caused by the Syrian war in 2011, our economic performance has been drastically affected. However, with robust economic policies, a strong financial sector, and continued trust of the Lebanese people in Lebanon and abroad, the country is able to weather the crisis until the cycle is reversed. Lebanon has one of the highest bank assets to GDP ratios in the world amounting to 345%, which ensures ample solvency to support the needs of both, the private and the public sector. In addition to that, the pegged currency exchange system in the country, combined with attractive interest rates and a strong remittances base ensure financial stability and continued growth in the stock of capital.