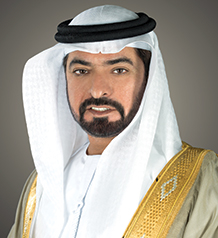 HH Sheikh Hamdan Bin Mubarak Al Nahyan joined the Federal Government in 2004, as the Minister of Public Works (2004-2013). He is currently serving as the Minister of Higher Education and Scientific Research, and he is also the President of the UAE University. He maintains other positions including Chairman of the Board of Directors of Royal Jet and the National Institute of Tourism and Hospitality. He obtained his Bachelor’s degree in Economics and Management from the UAE University in 1982, and possesses distinct expertise in management and aviation, acquired in his academic studies, training courses in the UK, and practice by virtue of its responsibilities. He was awarded an honorary uniform from the Union of Pilots and Airmen (London), and VIP membership in the Royal Society of Aviation in 1999.

How is the Ministry of Higher Education progressing in implementing its 2010—2020 strategy?

When the 10-year strategy was announced in February 2010 as a national document to achieve the UAE Vision 2021 on its Golden Jubilee, it was aimed at making the UAE among the best countries in the world, according to four pillars: an ambitious and confident people maintaining their heritage, a strong union united by a common destiny, a competitive economy led by the UAE citizens distinguished by creativity, and knowledge and the quality of a good life in a nurturing and sustainable environment. The Ministry draws its strategy from these four pillars, bearing in mind creating a generation of citizens confident in their leadership abilities, in their land, in their homeland, and in the potential of their State to strengthen the union through this generation; hence, it could not only keep up with the developments, but to lead and always be in the foreground, and the road to this is knowledge and sustainable knowledge in all areas of life. We developed our strategic plan for 2014-2016 in order to contribute to the achievement of the knowledge society and the development of higher education and scientific research in the state. In addition to the establishment of the National Committee for Scholarships, with the aim of ensuring complementarity and coordination between scholarship authorities in the state, we aim to guide the system of scholarships and grants in line with the laws of the Ministry and to develop a strategy and performance indicators for the scholarship system to meet the needs of the labor market in the State. The signing of several agreements and memorandums of understanding (MoUs) with countries that have pioneering experiences in higher education and scientific research to raise the e-readiness and transformation of our services into smart services for more convenience for the customer have increased well-being and happiness indicators in the UAE under the guidance and initiatives of our wise leadership.

What opportunities do you see for educators, entrepreneurs, investors, and education businesses in the higher education sector in the UAE?

The higher education system is a consistently integrated one; any change that occurs in one of the paths is definitely followed by change in other paths; the UAE market is a promising market and an attractive environment. In addition to local investments, foreign investment in the state reached $14.4 billion in the year 2014. Education and communication technology is considered one of the sectors with the most investment. The UAE is the first among Arab countries in attracting FDI due to sustainable infrastructure, pro-business legislation and regulations, safety and security, and harmony between more than 200 nationalities living in the UAE. In addition to a State-led green economy initiative regionally and its adoption of green technology, this means growing opportunities for innovation, scientific research, inventions, and academic study in the various fields of science. The state attracts prestigious top universities to set up branches in the UAE, and studies indicate that the number of students in GCC countries is continuously growing, and it is expected to reach 11.6 million in 2016. And through local or international exhibitions held in the state, which specialize in education and employment, the UAE environment is one of the most attractive environments for investment in education, and investment in some Emirates is expected to grow by 60% by the year 2020.

What legislative reforms have been key to the education sector’s development in the UAE?

All the affairs of higher education and scientific research are continually discussed under the umbrella of the Federal National Council, and take all appropriate decisions consistent with the vision and ambition of the UAE in cooperation with the relevant institutions and bodies. The Ministry does not work in isolation; on the contrary, it is the federal agency most interconnected with others, and the proposals submitted by the Ministry or other relevant actors are discussed in order to develop or update some systems so as to improve and keep up with changes on the global education front, however big or small these proposals might be.