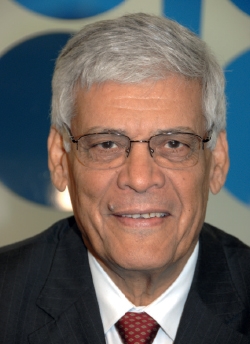 Abdalla Salem El-Badri was appointed OPEC Secretary General on January 1, 2007. He began his oil industry career with Esso Standard in 1965 and became Chairman of the Libyan National Oil Company in 1983, before being made Minister of Petroleum in 1990. His ministerial career continued with his appointment as Libya’s Minister of Energy, Oil, and Electricity in 1993 and Deputy Prime Minister in 2004, before he returned to the chairmanship of the Libyan NOC until 2006. In 1994, he was both President and Secretary General of OPEC, and again served as its President in 1996 and 1997.

Saudi Arabia is a founding member OPEC and its largest producer. What role does Saudi Arabia play in OPEC’s current policy objectives?

Saudi Arabia is OPEC’s largest producer, with major reserves and potential, and an experienced and highly skilled workforce educated both at home and internationally. But there is far more to Saudi Arabia’s role than just its size; it is vital to OPEC’s decision-making process and in helping achieve the central objective of oil market stability. In this regard, it is always looking to find positive solutions to any challenges the Organization may face, and to work constructively with all the other Members. In terms of the history of the Organization, Saudi Arabia is a founding Member, has hosted a number of OPEC Ministerial Conferences, has held the OPEC Conference Presidency on several occasions, and afforded the Organization a Secretary General in the 1960s. In addition, it also hosted the Third Summit of OPEC Heads of State and Government in 2007, which concluded with a Solemn Declaration in which principles were set out to guide the future work of the Organization. Saudi Arabia has contributed much to the Organization. We respect and appreciate its support and input. And this goes for all Member Countries: each of them has a voice and their views are important to the Organization’s present and future.

OPEC has predicted an increase in oil demand in 2014 by over 1 million barrels per day (bbl/d). At the same time, it also suggests that non-OPEC countries will meet this demand increase. What does this mean for expanding OPEC production in the years ahead?

Yes, we expect that supplies from non-OPEC producers will meet the expected global oil demand increase this year. We have recently seen an expansion in non-OPEC production, particularly in the US with tight oil. These developments are welcome—we need diversity in production. There is room for all sources of energy, and oil, in particular. However, we also need to keep our eyes on the long term and where supplies will come from. When we talk about our future, we are not just talking about the next few years. What is clear is that significant OPEC capacity expansion will be required. We expect to see the call on OPEC liquids increase by over 10 million barrels a day—to over 47 million bbl/d by 2035. This is greater than the expected increase in non-OPEC liquids supply over the same period, at just under 9 million bbl/d. Of course, OPEC continues to invest—to maintain existing capacity and add new production—to meet these future expectations. And as it has done for many decades, OPEC and its Member Countries will continue to monitor the market on a daily basis, and make sure that production and future investments are in line with how we see the market in the coming months and years.