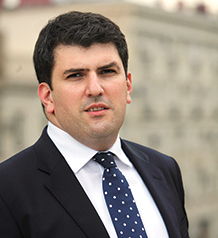 Fariz Azizov studied accounting and auditing at the Azerbaijan State Economy University. He holds a Project Management Master’s certificate from George Washington University (US) and an MBA from the Lancaster University Business School (UK). His professional experience includes both corporate and entrepreneurial leadership roles. He has 15 years of corporate experience in the financial sector of the country, including management positions in banking, senior management, and COO at three diversified, high-growth insurance companies and securities market institutions. He joined the National Depository Centre of the Republic of Azerbaijan in 2008 as a Vice-Chairman and was appointed Chairman of the Centre in 2011. He is also a Project Manager for the Capital Markets Modernization Project between the World Bank and the Government of Azerbaijan. Since January 2014 he has been Chairman of the Executive Board at the Baku Stock Exchange.

Share on:
TBY talks to Fariz Azizov, Chairman of the Executive Board of the Baku Stock Exchange (BSE), on the capital markets environment in Azerbaijan.

Overall, 2014, especially its second half, was a complicated period of time in the global and regional arena. Geopolitical and energy market volatility affected many regional economies and national currencies. The Azerbaijan capitals market and the economy overall continue to demonstrate stability and resistance to negative external factors. For the BSE, for example, it was an outstanding year. Total trading volumes exceeded AZN13 billion, which is a record figure since BSE’s inception in 2000. Another highlight was the launch of new private market initiated product lines. It is worth remembering here that initially, BSE emerged during the privatization processes in the 1990s. A few joint-stock companies along with a brand new investor category sprang up in Azerbaijan as a result of two privatization programs adopted by the government at the time. Over the decade, the number of individual and corporate investors reached almost 100,000 and joint stock companies reached over 2,000. This eventually led to the inception of BSE. At the initial stage of its development—until about 2008—BSE was operating under the post-privatization framework. Government securities were responsible for almost 90% of all trading volumes. This period is now over. In 2014, the launch of new financial and capital market tools, such as classic securities, really stood out and marked the year. We also launched market makers supported corporate bonds trading and repo transactions with them, as well as started selling margin-based derivatives—currency and commodities derivatives. This resulted in record figures and BSE exceeded all the previous years’ indicators. Despite the signs of a crisis in the global economy, we expect BSE to thrive in 2015.

What are the reasons behind the significant increase in corporate securities?

Over the past 18 months, the amount of corporate bonds in the local market has tripled. On the institutional side, the segment has become more complex as well. The legal and operational framework for both corporate repo and market makers’ service was elaborated. Around 12 types of liabilities led to the development of the market makers’ services, which, in turn, led to the liquidity of these tools and increased trade on the corporate securities side. The total volume of this trade has still not reached the level of government bonds; however, it is almost comparable now. Currently, Azerbaijani companies are mainly funded by their profits, the capital injections of their shareholders, and traditional bank loans tools. Still, capital markets are becoming more appealing to them. Awareness of new market instruments is rising, which is welcome news for us.

The state program for the development of capital markets that was started in 2011 is going on to 2020. How successful has it been so far in streamlining capital markets?

This program is quite elaborate, and comprises legal, administrative, and technological advancement of all the securities market institutions, and embraces an entire decade. To support the program, Azerbaijan signed a credit agreement for the capital market’s modernization project with the World Bank. The agreement covers half of the 10-year state program and comprises such significant sub-projects as the legal framework consolidation and creating a capital market law to place the legislation in line with that of Europe. It also implies revitalization of the operational base of BSE and the NDC. We have just completed one of the tenders within the state program—a contract for purchase and installation of the unified eleactronic trading and post-trading securities market platform—and all the documents have already been signed. This ambitious project will be realized over 2015 with the Korean Stock Exchange. It will allow us to streamline transactions and will broaden the horizons for our brokers.

What is the process required for foreign investors to work with BSE?

There are no limits for foreign investors to participate in transactions at securities market of BSE in terms of taxes and regulations regarding non-residents’ capitals registration and profits repatriation. The NDC is carrying out all of the associated duties regarding non-residents registration. In this sense, the process is as easy for a foreign as it is for domestic investors. It is enough to choose a broker and a bank to join the market. The preparation will take about five days for non-residents. After opening the relevant accounts at the depositary center, choosing a broker, and signing the contracts, a foreign investor can start trading at the securities market. The participation of foreign investors at the capital market is quite liberalized.