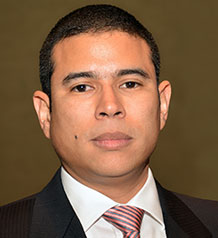 Juan Carlos Croston is Vice President Marketing & Corporate Affairs with Manzanillo International Terminal — Panama (MIT-Panama). In this role, he is responsible for commercial and business development strategy and the company’s social responsibility and sustainability initiatives. He is an active member of the Maritime Chamber of Panama (president of the board 2014-2015), the Caribbean Shipping Association (current vice-president 2015-2016), and other local and international organizations. On July 2014, he was granted the Distinguished Alumni Award by the International Maritime University of Panama and, on May 2015, was named by Lloyd’s List in their “Next Generation 2015“ list of worldwide maritime leaders, the only one from Latin America. He holds a BSc degree in nautical engineering from the former Nautical School of Panama and an MSc degree in maritime affairs from the World Maritime University in Malmö, Sweden.

Share on:
“The problem with this is that the media outside and inside dampens the optimism within Panama.“

How has the expanded canal reshaped the logistics sector in Panama and the region?

On the container business, the impact is not as large as the LNG business, where there was a major impact. By expanding the canal, we maintained Panama’s position as an important trade route in the world. The first impact was that we retained the business and services that left us and are returning from Suez. In addition, this coincides with the consolidation of shipping lines that are now using the expanded canal for some of their products, of course, using larger vessels. What happened is that we are not only returning to previous levels but are able to grow bigger and better. We will see the impact more going through 2018, when alliances are consolidated. We did not expect a major impact on the container business initially, though LNG saw a major impact as a new route was opened.

How do you apply your company’s values of efficiency, productivity, and readiness for the future in Panama?

The greatest challenge in this business is trying to create capacity when volumes are down and being prepared to take care of the capacity when volumes go up. The trick here is to create capacity in a way that can match demand without spending a large amount of money. What we have done in many cases in our terminal is to use the same footprint that we have and add more technology. In the end it helps to really move more cargo to the same terminal. This is what we are doing now because we seek to do a little bit through more advanced technology equipment to lower costs. The biggest problem that we have is that Panama’s population is only 4 million so we cannot compete with larger markets, with way more people and more developed agricultural/industrial sectors[JCC1] . The challenge is to predict what is next and sometimes we hit the target and sometimes we get close and then adjust. We cannot, however, just invest a large sum of money and wait for the market; we have to create capacity and normally it takes 18-24 months to create capacity and a new dock.

How is the company positioned to boost the development of Colón?

When we started in 1995, we had no idea what corporate social responsibility was. All we knew was that people lived there and we wanted them to work with us, so we decided to have a two-phase program that focused on giving people the best place to work and a great place for them to live. We first did the internal part, and then considered how we could do the external part. We focused on our people and then looked outward and built hospitals and schools and invested in baseball and soccer teams, as well as in education. Our biggest challenge is that we want generations of families to continue working in our port. We have the first generation working here for over 20 years and are starting to hire the children of the employees who first started working with us; we want people to be prepared. We need to keep the people of Colón in Colón, because if they all migrate elsewhere, we will not see the benefits. We are involved in many activities and are the biggest in Colón in this respect, which started from having no idea about CSR and simply using common sense, which has worked. Subsequently, there was a name for such projects and we realized we were doing it without knowing that we were; we simply wanted the best for our people working here. The most important thing is that our people now run operations in Haiti, Colombia, and Vietnam because in the end the idea was to offer a career and not just a job. This has worked and is one of the things that we are truly proud of; all the other parts such as equipment, cranes, and technology can easily be found in any part of the world. The challenge was that when the Canal expansion stopped, everyone lost their jobs and struggled. The part we are concerned with now is that the type of labor we need requires another level of education that we are not getting. This is the biggest challenge; how we do the job on the existing education level. We need more than what the schools give us; we need what the market demands. Our biggest challenge following the expansion of the canal is now the expansion of education.

What are your targets, priorities, and ambitions for 2017?

We need to consolidate our logistics hub but change the concept a little as we have to go more into developmental high-tech products as the real cost of labor in Panama makes the prices of products uncompetitive. If we do not understand that then we are fooling ourselves; we need to look into products where we add labor costs. This is where we are talking about high tech. We also have to look at electronic services such as Amazon and Alibaba because all companies need to run such a business is a place from which they can dispatch orders. In Latin America, having a Miami zip code is a bonus; customers send everything to the Miami zip code and everything gets forwarded to their country. Why can’t we do this in Panama and become a major center of distribution of e-commerce as well? The free zone concept is there but it will not grow much more as having a free zone does not make a large difference. We need to have free zones, added value, e-commerce, and airline hub of the Americas as well as cargo as we do not handle enough. The dream is to consolidate this and not just have each sector grow individually; when we put it together the package and value proposition that we can put into commerce, this is the ideal scenario. This is great for business because that generates cargo. Panama has been in the newspapers too much and not for the right reasons. The problem with this is that the media outside and inside dampens the optimism within Panama. People talk about everything that is wrong but currently compared to many places in the rest of the world things here are extremely positive.