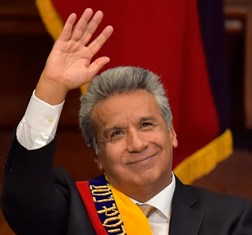 Journey to the Center of the Earth

Lení­n Boltaire Moreno Garcés was appointed the 44th President of Ecuador on May 24, 2017. He was previously Vice President from 2007-2013. He obtained a degree in psychology from Universidad Central del Ecuador and started his career in the field of training and development. He started his public service career in 1996 at the Ministry of Government, and went on to hold positions at the Ministry of Public Health. In 2012, he was nominated for the Nobel Peace Prize in recognition of his advocacy for people with disabilities.

Share on:
Ecuador will continue to drive growth and development with sustainability in mind.

Ecuador is traditionally a primary economy, with great strengths in agriculture and aquaculture, and rich in resources. How do you plan to give more emphasis to these industries in the value chain?

With the policy of the energy and mining sector, we seek to attract and promote new investments, taking advantage of synergies with the private sector and applying new contractual models, such as production-sharing contracts and concessions, in the framework of transparent negotiations where national interests will prevail. In the oil sector, we are strengthening the four smaller fields of oil and gas, Ronda Intracampos and Ronda Suroriente, through private investment. In addition, we are working on proposals to diversify our energy matrix by introducing natural gas, improving the quality of fuels, and reducing the import of derivatives. In this framework, energy-efficiency measures have also been adopted throughout the entire hydrocarbon chain. In the mining sector, we aim to create a national mining cluster to strengthen small-scale mining and artisanal mining while developing strategies for articulation and productive linkages. Ecuador has a high-potential portfolio for investment; with our six second-generation projects, investments of over USD10 billion could be obtained. Ecuador has high agricultural and livestock potential and it is focusing on the industrialization of agricultural products. International demand forces innovation and technology, though there is also significant local demand. We will generate an organized agricultural sector that is valued locally and internationally.

Ecuador has strong environmental preservation policies. What is your strategy to implement such an environmental policy across all sectors of the economy?

We will continue to bet on clean and renewable energies. Currently, 71% of the energy consumed in the country comes from water and wind sources. Additionally, other projects that will contribute to the energy matrix are already being studied and built. The environmental policy is applied in all economic sectors, especially those engaged in extraction. The government has reversed 2,000 mining concessions and, through dialog with environmental sectors, promoted a popular consultation to limit the exploitation of crude in Yasuní­ National Park, which was approved. In addition, the state has signed new oil contracts with the highest environmental standards. Environmental conservation is a joint effort; every country must move toward development with its natural environment in mind. That is why we have also signed cooperation agreements with countries like Qatar to promote environmental care. Ecuador seeks to improve its economy sustainably.

How do you plan to open the economy through the country’s numerous FTAs?

We seek to consolidate Ecuador’s participation in the global economy via commercial groups and thus strategically expand its presence in the international context. The signing of FTAs with some of our main partners is viewed as a fundamental tool to not only achieve a substantive reduction of tariff and other barriers for our products, but also to seek to match the competitive conditions of our exportable basket. With our agreement with the EU, in the first instance, we aimed to consolidate Ecuadorian exports that benefited from the Generalized System of Preferences (GSP), which expired in 2016. Having such commercial instruments allows us to generate a space for dialog between countries, conducive to monitoring bilateral trade through the review of difficulties generated by the commercial dynamics. As a government, we responsibly think about the future of new generations.

What are your main ambitions for the coming years?

The country is in the process of democratic, economic, and productive consolidation. The new policy aims for the private sector to be the engine of development. We aspire to have sustainable economic growth based on production and foreign investment. Ecuador offers legal security, strong and secure dollarization, political stability, and, above all, transparency in its administration. The Law of Productive Development, which generates stimuli for investment and entrepreneurship, is already in force; our efforts are focused on increasing production, exports, and new sources of employment. We will continue to make decisions to consolidate ourselves as an investment destination.