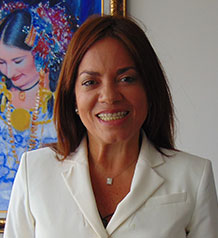 Jennifer Champsaur completed her studies in the hospitality sector and was later part of the team that opened the first Marriott Hotel in Panama. Two years later, she moved to Miami to open the JW Marriott in Brickell before eventually returning to Panama. She worked with Hotel Cesar Park and ran the Marriott Vacation Club before joining ATP.

Share on:
“The expansion of Tocumen International Airport will be ready at the end of 2018.“

How much is the government investing in MICE to further develop tourism in Panama?

We have a Destination Marketing Organization (DMO) office and are investing in international firms that focus on the MICE segment, such as IMEX in Las Vegas as well as one in Frankfurt. The demand for events and conferences is growing and there is a great deal of potential here. We are definitely one of the most secure countries in the region and our hotel infrastructure and geographic position also give us an added advantage. There are five direct flights to Panama from various points in Europe that give us another window of opportunity within the MICE segment. Now everything needs to be creative and of high quality. On the hotel side, for example, for events we have modern international hotel chains. It is also important to be innovative with the technology we provide for events.

How can Panama market itself as an appealing destination for this niche segment?

Participation in international fairs is extremely important; we regularly sponsor events like International Congress and Convention Association (ICCA), which gave us the opportunity to promote what we have in Panama. As a meeting destination, we have the Atlapa Convention Center as well as a new convention center in Amador that is currently under construction and will be ready by the end of 2018. We also focus on developing the interior of the country; we will have another two convention centers in Chiriquí­ and Herrera. We have six daily flights to Chiriquí­ from Panama City with Air Panama and Copa, which connects Chiriquí­ to the rest of the world so there is great opportunity there. There are more than 10,000 rooms available around the country, plus 20,000 rooms in international luxury chains and middle-class chains in Panama City, which gives us many opportunities. For the MICE segment, the most important things are connectivity, hotel infrastructure, and locations to do events; we cover all three areas. We have different airports in the country and the expansion of Tocumen International Airport will be ready at the end of 2018, with 21 gates available in the new terminal. We will have to work with all our assets and put in greater effort into promoting the locations and sponsoring events. We also provide incentives for certain groups and exhibitions. We had the Summit of the Americas in 2016, which received a great deal of exposure.

What is the importance of the new Amador Convention Center and how will it stand apart from Atlapa?

Amador will be a completely different and modern convention center, with more room for exhibitions. Atlapa, for example, has an amphitheater with a capacity for 2,800 people; however, there will not be a theater in the new convention center because we want it to have more space for exhibitions and larger events. The important thing with the two convention centers is the opportunity to sell Panama as a whole because Panama is not only the Panama Canal. We have culture, history, and adventure. In every single province, there are unique attractions; for example, in Chiriquí­ there are mountains, beaches, and cold and hot climates in the same place.

Which countries or markets do you target?

We definitely target Latin America; however, the US is the most important area we have to cover. There are also many decision makers in Mexico as well as in Central America. However, as we are growing, we see great opportunities in Europe. Europeans are starting to look at destinations in Latin America because of security issues elsewhere. For us, the main target is the US and then Latin America. We would love to have a 20% increase in the number of rooms for groups and conventions by the end of 2017. We look at the long term and what we are working on now will show results in four to five years. Our regular partnership with ICCA helps a great deal and the most important focus is on technology and medical events. We work closely with medical organizations to attract such events to Panama.