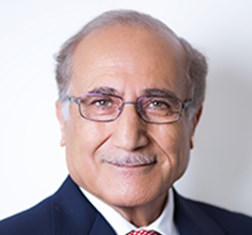 Dr. Jawad Anani started his career path working as a Head of Economic Research at the Central Bank of Jordan. He assumed high level positions in the government including General Manager of Social Security Corporation, President of the Royal Scientific Society, State Minister for Prime Ministry Affairs, Minister of Communications and Information Technology, Deputy Prime
Minister for Social Development Affairs, Foreign Minister, Deputy Prime Minister for Economic Affairs, State Minister for Investment Affairs, Minister of Labor, Minister of Industry, Trade and Supply and Minister of Tourism. He has also served as Chief of the Royal Hashemite Court, the last to serve under the Late King Hussein bin Talal, and as a Senate member from (1993-2001) and (2013-2016). He was Chairman of Jordan Economic and Social Council and chaired the boards of many public institutions as well as being a member in others. He has worked as a lecturer in a number of Jordanian, Arab, and American Universities, and has more than seventy scientific research papers and books published.

Share on:
“Jordan’s problem is that the country is short on liquidity on all fronts—money, oil, and water.“

The stock market is often regarded as the barometer of the national economy. How does this apply to Jordan?

In the medium to long term, the stock market is the mirror for the economic situation in a country. It reflects the overall standing of economic performance and indicators as well as the changes. However, in the short term, the stock market has its own dynamics, where players within the market decide the day-to-day fluctuations. In Jordan, we had certain boom years on the ASE, and we were hopeful we could expand it both horizontally and vertically. Unfortunately, after 2008, there was a huge drop in size and the share price index, and a number of companies also relocated elsewhere. This led to the demotion of the ASE from an emerging to a frontier market. This alienated large pension funds and institutional investors that only invest in emerging markets and above. ASE is working hard to regain that emerging market status, so we can attract more investors. There are great opportunities because funding is tight in Jordan, so most people do not run their portfolios on stocks. They opt for government bonds and securities, which provide a great income that is tax free. There are excellent opportunities for profit in the industry, banking, and finance sectors here.

What needs to be done to attract investment and enhance confidence in the Jordanian economy?

We would like to see the government abolish the recently imposed tax on trading and speculation in the market. The government seeks long-term investment; however, if that is the case, we will not get any money because speculation is part and parcel of investment. It is also important for monetary policy in terms of open market operations. One cannot have an open market without a variety of portfolio investments in the secondary market that impact people’s decisions from one form of paper investment to the next. To give buyers of securities comfort, the government has given them recourse to the issuer. However, there should only be recourse to the issuer at maturity, and if anyone wants to sell before maturity, they should come to the secondary market, which would help ASE expand. We also recently introduced sukuk, which is a step forward. We hope to expand the market and make it deeper. We are also trying to convince some of the private shareholding companies to go public, though some, family businesses in particular, do not want to lose control. We encourage them to create trust funds and release some of their shares into the market to make their companies more robust.

Can you elaborate more on your evaluation of the proposed tax reforms?

I was vocal about my opposition to the proposal. My dissent did the trick, and we ended up adding an extra fee that both investors and brokers were satisfied with. It was not the ideal solution, but it was the next best one. In terms of the tax reforms overall, income tax law has been heavily debated in Jordan and has incited considerable emotion. There was no need for the government to increase tax rates. It could have thoroughly looked at the margins and the income groups and adjusted the rates to make it a more progressive tax system. It could have also tightened its grip on tax evaders by closing the loopholes, essentially increasing revenues without actually increasing tax rates. Now is not the time to increase rates; it is more important to enact reforms that enhance the government’s ability to collect taxes.

What do you see as Jordan’s key bilateral relations?

Moving forward, Jordan must realize that its traditional and long-term beneficial relations with the Gulf states are changing. Previously, we used to get about 50-70% of our FX from our economic relations with the Gulf states. This took the form of employment with many Jordanians working abroad, trade, investments, soft loans, aid packages, and export of goods and services. Things are changing, however. We are worried more Jordanians will be sent home because some of the Gulf states are having financial difficulties. Saudi Arabia has at least a USD45-billion deficit for 2019’s budget. The Gulf has its own challenges to worry about as it moves out of being a rentier economies and into being a region of productive economies. Jordan’s potential is more with our direct neighbors in the Levant, such as Syria, Iraq, and, perhaps in the future, Israel and the Palestinian territories. That would require a different set of regulations and likely a different paradigm. If we continue to antagonize Iran and Turkey, this will also influence our relations because of the leverage both countries have. We should focus on the Levant, though without severing our links with the Middle East; however, we cannot continue to pretend that things will stay the same. We must explore potentials that will give us new opportunities in different sectors. For example, Iraq is an excellent and promising neighbor. We can do pipelines, railways, and many other mutually beneficial infrastructure projects with longevity that will guarantee a better, more secure future, rather than depending on trade exchange and profits thereof. This can help establish wealth that both countries will be keen to maintain. At the same time, we can engage in agriculture and industry. Jordan’s problem is that the country is short on liquidity on all fronts—money, oil, and water. We have to resolve those three challenges. We need huge projects, like desalination, though these will not be cheap. If we want to have sustainable growth, we have to manage our water resources for the future, especially since Jordan’s population has skyrocketed to 10.5 million. That was the country’s projected population for 2030, so we have to find a way to accelerate our processes to maintain the same levels of welfare and economic sustainability. Moving forward, we need to be more conscious and recalculate what we are paying in real terms for our production.