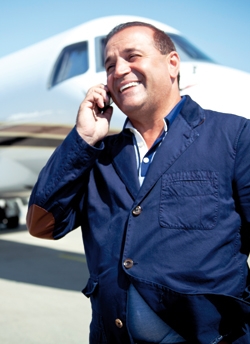 Haji Ibrahim Nehramli was born in 1958, and graduated from the Economics Faculty of Nakhchivan State University. In newly independent Azerbaijan, he established Ilkan in 1991. Between 1995 and 2000 he was a Deputy of the Supreme Majlis of Nakhchivan, and also founded Avesta Concern in 1996. He is currently the President of the company.

Share on:
What are the latest developments with the Khazar Islands project? We have begun constructing the buildings on the islands, and 13 are already nearing completion. In addition to this, we […]

What are the latest developments with the Khazar Islands project?

We have begun constructing the buildings on the islands, and 13 are already nearing completion. In addition to this, we reclaimed 300 hectares of land. A 276-meter bridge is slated for completion in February 2013. We have created 10 hectares of green spaces, and a five-hectare space will boast three football stadiums and a number of tennis courts, while the other section is designed to become what we call “Children’s World.” In June 2013, the parks will be finished and nine restaurants will be opened. We have already finished the microbrewery, where residents and visitors can watch how their refreshments are prepared.

What preparations were made for the completion of Phase I, and what can we expect from this initial work?

We bring the stones from the mountain, which is 10 kilometers from the sea, to reclaim land to build Khazar Islands. We expect to finish filling Phase I in 2015. There will be 6 million sqm of construction works during Phase I, including 20 kilometers of boulevards in total. Phase I will be made up of six islands, and the development of four of them is in progress. Filling the land is a difficult task, so we will use specialized Dutch ships for this type of work. There will also be four hotels and apartment complexes. When Phase I is complete, it will also feature 40 restaurants on the water.

How is the project being financed?

We have planned to finish the construction in 2016-2017. In total, we will need to invest $10 billion to complete Phase I. Of this amount, 20% will be sourced from Avesta concern, 20% from remaining funds, and 60% will come from sales. There is a new mortgage law being developed in Azerbaijan, and if it passes into legislation we will also be able to extend mortgages on apartments in the complex while the facilities are still under construction. Therefore, even if the execution of sales hasn’t finished yet, the mortgages will begin in March 2013.

“I expect Azerbaijan to earn at least $20 billion a year from tourism revenues.”

What other projects is Avesta Concern involved in?

Avesta comprises 25 companies, each of which is involved in a different sector, whether it be tourism, construction, marketing, or advertising, for example. We have several other projects in addition to the Khazar Islands project. Another initiative is a trade center that we expect to complete by end-2014. We also have five large apartment projects, all of which are under construction now, as well as a hospital. I also want to create several manufacturing zones in order to use local production more widely to meet our needs.

How would you describe the investment climate in the local construction sector?

This used to be an area of great concern for the country. However, with new laws the construction sector has become relatively well regulated. Today, I believe that Azerbaijan still needs approximately 100 million sqm of new construction projects, and for this to come to fruition, foreign investment is essential.

How would you assess the evolution of the construction sector over past decade?

A decade ago the construction sector was in disarray; the contracts were concluded and the companies constructed without licenses, and as a result the quality was very poor. Now, everything is well regulated, firms have the appropriate licenses, and certain quality standards have been firmly followed.

What are Avesta’s medium-term plans?

We are planning to build 19 large bridges during Phase I, which will not use asphalt on the roads. Even though it is very expensive, the company prefers granite, which lasts thousands of years. In the long term, granite could be up to 50 times cheaper than asphalt, which has to be reapplied every few years. Another facility will have the capacity to serve 1 million people and boast two stories of underground car parking, with a capacity for 1 million cars. We are planning to set several world records: the largest car park, the longest boulevard (at 150 kilometers), the most restaurants in one city, a 1,050-meter tall building, and 150 bridges. We expect 700 million people to visit Azerbaijan solely to see this building. The company also expects at least 20 million people a year to visit Azerbaijan in general. To accommodate these rising visitor numbers, Azerbaijan needs to expand its transportation infrastructure. I expect Azerbaijan to earn at least $20 billion a year from tourism revenues. This would mean more revenue from tourism than from the oil and gas sector. Azerbaijan Tower will promote the name of Azerbaijan everywhere, and thus I am putting all of my effort into this project because as an Azerbaijani man I love my motherland. The President and his administration have also been of great support to us, and we would like to reciprocate this great support with a project worthy of this country.