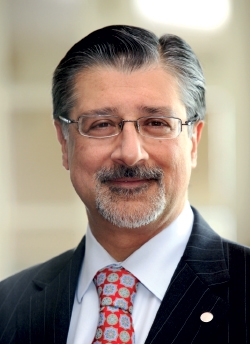 Adnan Z. Amin heads up an agency that promotes the adoption and sustainable use of renewable energy worldwide. He successfully led the Agency’s transition from the preparatory stage to its establishment in April 2011, when he was elected IRENA’s first Director General. Amin, from Kenya, has over 25 years of experience in multilateral diplomacy and direct engagement in promoting the global development and socio-economic agenda, including sustainable development. Prior to joining IRENA, he served as Head of the UN’s System Chief Executives Board for Coordination (CEB) Secretariat. He also served as the Executive Director of the Secretariat of the Secretary-General’s High Level Panel on UN System-wide Coherence, co-chaired by the Prime Ministers of Mozambique, Norway, and Pakistan.

Share on:
How do you see the development of renewable energy proceeding in the UAE? It is quite encouraging, if slightly unexpected, for an oil-producing country on the scale of the UAE […]

How do you see the development of renewable energy proceeding in the UAE?

It is quite encouraging, if slightly unexpected, for an oil-producing country on the scale of the UAE to launch ambitious initiatives in terms of LNG efficiency and renewable energy. When the initial projects were announced, people wondered what our intentions were. I believe that these are now obvious; throughout the region and the UAE, we are witnessing rapidly growing demand for energy in step with industrial production, and a rising population. Increasingly, highly subsidized fossil fuels are being used for domestic consumption. At the same time, you see changes in the energy market and the emergence of new actors. The debate over carbon emissions is becoming more pronounced. For a country with a dynamic resources base, looking to the future to see how to build a strong, vibrant economy and transform the energy mix may strike some as a radical undertaking. Yet, once people have digested the Abu Dhabi initiative, it will become clear just what a prescient measure it was. One of the interesting effects of this was the amount of attention attracted to the region from a renewable energy perspective. In fact, a number of large oil producers are looking to its potential for development. We are seeing heightened interest in renewable energy and announcements from various targets throughout the GCC region. Saudi Arabia has announced ambitious plans for renewable energy deployment, to the tune of 54 GW by 2022. This will render it one of the fastest-growing solar markets in the world.

What lies behind this shift in demand?

Part of it is that the oil supply is declining. And what’s more, the world is set to evolve in terms of its energy requirement. We are seeing a tremendous technological change and innovation in energy, whereby energy efficiency is poised for growth. Also, you can use hydrocarbons for more than just fuel. There is a much more nuanced thinking about the future compared to few years ago, and part of the more visionary aspect of the strategy to deal with energy evolution is to look at renewable energy generation for the future.

How do you assess the growth of IRENA in terms of international recognition?

The growth has been remarkable. We held our first assembly upon the formal launch of the institution in April 2011. At that time we had 67 members, but just three years on, we have over 120 members, with around 45 countries in the process of joining the agency. When you bear in mind that membership of the UN numbers 194 nations, and that we have 165 in the process of joining, you appreciate that ours has been one of the fastest-growing issue-based organizations in the world by membership. We are also attracting a tremendous amount of attention from academia. And what’s more, we are seeing increasing public interest in renewable energy, which is promising for the future.

What is the significance of such a large oil-producing country building the Shams 1 Solar Power Plant?

The first thing people need to understand is that it makes economic sense. If you are subsidizing your oil consumption, it effectively means you have a very high opportunity cost of oil you do not export. If you factor that cost into the equation, the concentrated solar option actually becomes economical in the context of the energy you are not exporting. The plant marks a very ambitious initial step and has the capacity to generate 100 MW, making it the biggest solar plant in the Middle East today, and getting people to sit up and take note. Not only is it a large investment, but also an economically positive one. And as we enter the next phase of development, we expect to see the economics working in its favor. More importantly, the Shams Plant has had a huge regional impact. A high number of actors from energy administrations in the region have come to see it for themselves.