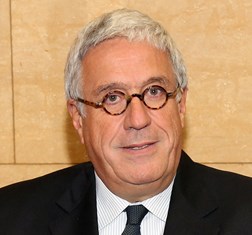 Vice-Chairman of the Board & Group Strategy Director, Bank Audi

Freddie Baz joined Bank Audi in 1991 as Advisor to the Chairman and founded the Secretariat for Planning and Development at the bank. In addition to his duties as Group Strategy Director, Baz held the position of Group Chief Financial Officer from 2006 to 2015. In 2015, he was appointed Vice-chairman of the Board of Directors of Bank Audi and Bank Audi’s representative on the Board of Directors of the Association of Banks in Lebanon. Baz holds a state PhD in economics from the University of Paris I (Panthéon — Sorbonne).

How would you contextualize the risks and opportunities of 2019 relative to the previous years?

There are a number of alarming reports on the risks of a hard landing in Lebanon. The situation is certainly precarious but not desperate. If it is true that with a debt exceeding 150% of GDP and a budget deficit of more than 10% of GDP, the stability of monetary, exchange, and interest markets is at risk, Lebanon continues to have huge amounts of underutilized resources. Regarding budgetary revenues alone, the gap between actual and potential revenues stands at 10% of GDP. While part of this is certainly due to fiscal evasion, a large part is attributed also to the inefficiency of the fiscal administration in tax collection. On the spending side, waste and inefficiencies also represent no less than 5% of GDP. When we know that the required primary surplus to bring down debt ratios does not exceed 8% of GDP, we realize that the problem is more an issue of political governance rather than structural macroeconomic imbalances. Hence, the situation is more a question of willingness to adjust rather than availability of resources. Fortunately, the speech of the entire political class in Lebanon converged in 2019 toward the need for a more voluntary approach, which is very comforting.

In 2018, Bank Audi registered an 8% increase in net profits. To which strategies and factors can you attribute this growth?

2018 was indeed a good year for Bank Audi, which withstood persistently tough operating conditions in the region and managed to end the year with a sustained growth in activity and earnings and an improved financial flexibility within the context of good risk coverage. Bank Audi reported USD501 million in recurrent consolidated net profits after provisions, and taxes rose by 8% relative to the equivalent 2017 net profits. The bank’s earnings power has strengthened in 2018 amid effective asset utilization policies, in particular Lebanese entities, which benefited from market opportunities totally offsetting the rising cost of deposits and the impact of new banking taxes. Subsequently, consolidated spread expanded from 2.39% as of end-December 2017 to 2.62% as of end-December 2018. In parallel, our performance management policy launched in 2017 has generated additional cost savings by USD81 million, driving an improvement in the cost-to-income ratio from 51.5% in 2017 to 46% in 2018.

How would you describe your bank’s comparative advantage?

Beyond its size, strong regional footprint, wide diversification, and universal banking offering, which positions the group at the forefront of the Lebanese banking sector and among the top-20 Arab banking institutions, Bank Audi enjoys a number of additional visible competitive edges. The sustained growth and reinforcement of its financial flexibility over the past decades bears witness to a solid risk governance coupled with best corporate governance and compliance practices as well as an insightful management vision supported by a clear strategy. The bank also has implemented best practices in the realm of corporate social responsibility while having one of the best disclosure and transparency practices in the region. Bank Audi is a management-driven institution, which relies on a pool of qualified staff, 87% of whom are university graduates and whose main purpose is providing a dedicated service to all customers. Yet, what continuously differentiates Bank Audi is its unscathed eagerness to always innovate and advance. The international community, in particular rating agencies, has acknowledged all these competitive advantages.

What are your expectations for the bank in 2019?

Strengthening the balance sheet, reinforcing financial flexibility, and delivering a solid growth of recurrent net profits are the key headlines of Bank Audi for 2019. The group’s main purpose remains to achieve quality growth by efficiently meeting the needs of both businesses and individuals in the various countries in which we are present and ensuring long-term sustainable value to all stakeholders.