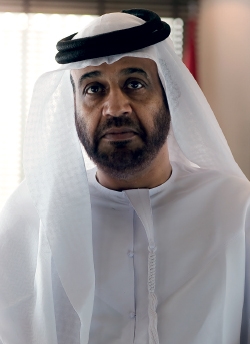 Eng. Suhail Mubarak Al Ameri is the CEO of SENAAT, one of the largest industrial investment and holding companies in the UAE, managing industrial assets for the government of Abu Dhabi and employing thousands of people across the group. He is Chairman of the Board of Directors at Emirates Steel and Arkan and is a Board Member at Agthia and Al Foah. Al Ameri has over 17 years of experience in managing industrial projects, including in the oil and gas sector with Abu Dhabi Company for Onshore Oil Operations (ADCO). He holds a Bachelor’s degree in Electronic Engineering Technology from Colorado Tech (1991).

Share on:
What are some of the key milestones and achievements of the company that reflect SENAAT’s contribution to Abu Dhabi’s industrial success? SENAAT, which translates as “industries,” is one of the […]

What are some of the key milestones and achievements of the company that reflect SENAAT’s contribution to Abu Dhabi’s industrial success?

SENAAT, which translates as “industries,” is one of the UAE’s largest industrial holding corporations, and manages more than AED23.7 billion of assets for the government of Abu Dhabi. It has been mandated to create, optimize, promote, and champion capital- and power-intensive assets, which support the growth and development of the Emirate and the national economy. By bringing together a range of subsidiaries within its core specialties, SENAAT is at the forefront of contributing to Abu Dhabi’s Economic Vision 2030. SENAAT is directly engaged in four of the sectors identified by the Vision, namely metals, oil and gas services, building materials, and food and beverages. Following the establishment of the company over four decades ago, a few of its key milestones include the establishment of the UAE’s only integrated steel producer, which has become one of the largest vertically integrated steel producers in the GCC, the two very successful privatizations of two of its subsidiaries, Agthia in the food manufacturing and distribution sector, and Arkan, which makes building materials, and the achievement of 100% Emiratization in the management of SENAAT.

Since 2004 SENAAT has shown growth of more than 30% in profits, revenues, and assets. What is your plan to sustain this growth?

While we remain focused on the sectors we know best, SENAAT actively seeks new avenues for investment and is constantly working with its subsidiaries to identify and benefit from new investment opportunities. We are proud of the fact that we have the capability to grow our businesses from scratch, as we have done, for instance, in the case of TALEX, or with joint venture partners, as in the case of NPCC, to ensure that we have the best expertise and the strongest platform to build upon. We maintain our emphasis on capital- and energy-intensive industries, and we remain a very cost-effective contributor to the Abu Dhabi economy. To sustain our growth we will continue to carefully assess all arising opportunities, and will also consider widening our horizons—both geographically and in terms of the kind of industrial contribution we can make—in a manner that satisfies our criteria for economic returns and benefits to Abu Dhabi.

Abu Dhabi is quickly becoming one of the world’s top business destinations. What factors lend it credibility as an international business hub?

It is true that Abu Dhabi is now being recognized for its growing reputation as an international business hub. Strategically located along major freight routes from Asia to Europe, it is developing key infrastructure to enable integrated transportation, links, and access. This, combined with its proximity to natural resources and very competitive energy pricing, helps position Abu Dhabi as a top business destination. Its tax-free framework within a stable currency environment adds to its attraction. In addition, Abu Dhabi’s connectivity with the rest of the world, through Etihad’s growing international network and Kizad providing capacity for over 1 million containers per year are crucial elements. In addition, Etihad Rail is a key project that enhances this connectivity, which will link up with other railway projects in the Gulf Region to increase trade and transport efficiency. But there is a variety of other attributes needed to make a business destination truly successful—not only economic, but also political, geographic, and demographic. All of these come into play in Abu Dhabi. The Emirate’s resource-based wealth, its political stability, economic vision and the ability to realize it, the presence of a new generation of locally-educated leaders, and the availability of, and welcoming environment for expatriate workers makes it a welcome new focus for the world’s business networks.