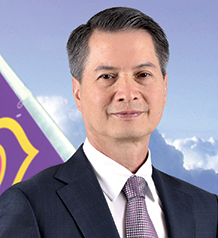 In The Air Again

Charamporn Jotikasthira was appointed as President of Thai Airways International in December 2014 to oversee the restructure of the national carrier. Previously he served as President of the Stock Exchange of Thailand.

Share on:
TBY talks to Charamporn Jotikasthira, President of Thai Airways International (THAI), on the success of restructuring and growth potential for the future.

THAI posted strong profits for 1Q2016. Is this a sign that the restructuring program initiated in 2014 is on the right track?

We are moving in the right direction and we increased the amount of passengers by 11% last year, from 19 million to over 21 million with seven fewer aircraft and four fewer major stations. Earlier, we also cut some routes, such as LA, Madrid, and Johannesburg. Those expenses have been reduced, efficiency has been improved, and fuel prices have been low. In 2015, our cabin factor was at 73.3%, which meant 27% of seats were empty. In 2016, our cabin factor should be around 80%, so approximately a 7% increase. Filling empty seats is crucial, because it is necessary to fill the seats on each flight. We have also made staff reductions in various departments, such as catering and ground handling. We have put a system in place to do better network planning. With such systems in place, we are able to conduct better fleet planning. In terms of pricing, we will have the ability to change and set prices more quickly and in line with our competitors, so once that system is in place it will have a major effect on improving efficiency. The fleet will be better, our pricing will be better, and operations will run more efficiently and more smoothly. Every little bit helps.

How do you also seek to grow and tackle the market?

Last year, we realized that the airline would have to shrink in terms of capacity. Once we resume efficiency and are free of some routes and aircraft, it may be possible to expand again. In line with those plans, THAI will open new routes to Tehran and THAI Smile will offer service to Cebu in the Philippines. We have also increased flight frequency on some routes. We have better planning overall, and can take on new growth as a leaner and more efficient company. In terms of the most promising markets going forward, China is high as always, and Japan, India, Australia, and the UK also have their own growth patterns. Europe overall seems to be doing much better. We work closely with the Ministry of Transport and the airport authority to increase the number of visitors to the country. We want to make Thailand an international hub, and this is at a time when competition is fierce in the region and worldwide, especially with Middle Eastern airlines, not to mention low-cost airlines, now shining on the international stage. Those factors and players pushed us to go through the intensive restructuring, which is making us more competitive overall. THAI Smile is one of the initiatives we developed for short-haul flights to compete with low-cost carriers. For long haul flights, we could improve our network management and planning, with new systems to help in that field; however, we are certainly on the right path. We also look closely at the integration of the ASEAN Economic Community (AEC), and envisage huge opportunities in this field. THAI should be the key player in terms of connecting this region with the rest of the world, and THAI Smile is one of the initiatives that will help us do so.

We are moving according to plan and that should help us attain a reasonable level of efficiency that will bring us close to our competitors. We have cut the gap significantly, which is what we are aiming for. We have been improving services in the meantime in order to become one of the top-five carriers worldwide. We have a new business class service, which was launched in November 2015, and currently half of THAI’s European routes offer that service. The new business class service is individual on-demand service, focused on individual passenger needs. We have also introduced all sorts of new cuisine and food selections, including Japanese, Thai curries, and Thai street foods, for example.