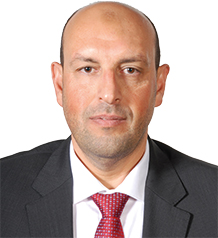 Appointed in 2009, Eng. Yasser Zaghloul is the current CEO of NMDC. He received the Best CEO award for the 2011/2012 period from the Middle East Institute and has more than 20 years of extensive hands-on experience in the industry. Zaghloul is a high-ranking member in several regional and global dredging societies and associations such as the Western Dredging Association. It is his personal mission to drive productivity and add value to his people, shareholders, and, most importantly, the environment in accordance with his personal and professional values.

What have been NMDC’s biggest achievements in the past two years?

In the last two years the biggest achievement for NMDC was to be recognized as a real international player on the global dredging map. This began with the completion of the USD2 billion Zakum project. During this project NMDC built four artificial islands for oil production platforms, which was a very complicated job because we made the islands into productive brown fields. That required sophisticated work in construction, methodology, and design. After the Zakum project, we moved into Egypt to lead the international consortium for Suez Canal and achieved that project on time as well. Then we went from Suez Canal to India for one of the biggest current projects for an LNG terminal. The culmination of all of these projects means that today, NMDC is recognized as a global player in the sector.

What are some of the strategic challenges that come with working on such large and innovative projects in Abu Dhabi?

The NMDC is honored to be taking on strategic projects for Abu Dhabi, like the Khalifa Port project, and the development of new islands for real estate and entertainment. Abu Dhabi Port is something unique for us and other companies because it is a multi-activity project. You will not find any of our competitors building quay walls up to 21m below sea level and also doing dredging in a project at the same time. This is really a unique job for NMDC to show everybody how much NMDC has to offer. For any project like that you would normally find a couple of companies working together, one to do dredging and another to do the quay wall, but NMDC is doing everything by itself. The foundation of NMDC is built upon our strong partnership with Abu Dhabi Port, as well as our relationship with the Abu Dhabi government entities, especially ADNOC. The Abu Dhabi government has trusted NMDC with its most strategically difficult jobs, which sends a very good signal. This kind of relationship with Abu Dhabi government and the trust of Abu Dhabi government for NMDC creates a strong foundation for NMDC to grow upon.

How does NMDC integrate smart technology into its projects?

We have our fleet plan initiatives already running, and we are building a new hopper that is up to date with the latest technology. We are upgrading our fleet with the latest technology, alongside another initiative to link our Cutter section fleet to automation technology for dredging. Everything is linked to performance and efficiency so whatever technology we implement is not solely for the sake of having new technology. The fleet development initiatives we have are to add more power to the fleet when it comes to qualifying NMDC for more complicated jobs.

What sustainability initiatives or environmental projects are you working on or supporting?

When you think of NMDC as a dredging company, there is often a concern for the environment because we are making channels and we are digging into the sea. However, we have a QHSE department, which is a strong component of the company, and we do a construction management plans to make sure that we are not damaging the environment. On top of that, we took the initiative to start several projects to improve the water circulation for mangroves and for the marine habitat. Furthermore, a couple of months ago we started initiatives to clean all the water ways of Abu Dhabi, as well the seaports. With our own equipment, we cleaned up everything, and by today’s figures we have removed about 42 tons of rubbish from the sea. We believe that this is our role, and we have to be committed to the environment because this is not just for us; it is for the coming generations.

What type of competition are you anticipating within the market and what is your outlook in general?

The main competition in the dredging is usually between six or seven companies, with a few in Europe, one very big one in China, one in the US, a small one in Malaysia, and we are the biggest one in the Middle East. We are competing with each other everywhere. Now that we have become a player on the world stage, 90% of our projects have international competition. Even in local projects you will find us competing with the other major dredging companies, whether it is here in the Emirates, Saudi Arabia, Bahrain, India, or Egypt. The market is not as easy as it used to be, and we are doing our best to keep growing internationally, not only in the GCC. At the moment, we see some projects coming, but of course it is tough. I see this difficulty in a positive light because it forces us to make the company resilient, capable, and ready for the challenges of te future. The market is always like that, and we have to use this as an opportunity to better NMDC.