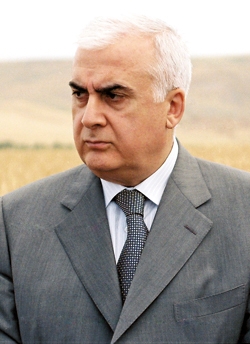 Minister of Agriculture, the Republic of Azerbaijan

Share on:
What have been some of the major developments within the Ministry over the past few years? There has been huge growth in almost all sectors of agriculture over the past […]

What have been some of the major developments within the Ministry over the past few years?

There has been huge growth in almost all sectors of agriculture over the past decade. Our GDP was AZN1.45 billion in 2003, and reached AZN4.76 billion in 2012. The volume of agricultural produce increased by 330%; this figure encompasses all agricultural products. The main reasons for this growth are the numerous decrees for the development of the agrarian sector signed by President Ilham Aliyev. This growth is not exhaustive, and there is the potential for more in our country. The implementation of state programs signed by the President, including the one on the socioeconomic development of the regions, will enable the sustained growth of the agricultural sector in the future as well.

How would you assess the importance of agriculture for the diversification of Azerbaijan’s economy?

Azerbaijan is known to the world as a country rich in oil and gas resources. Indeed, the driving force of the economy rests on oil and gas. However, during the first years of independence the oil and gas industry was a major part of the national economy, and now the development of the non-oil sector is a national priority. Therefore, the President committed the government to doubling GDP during the period of 2010-2020, and this growth should come from the non-oil sector. The agricultural sector constitutes part of the non-oil sector, and I think the potential for growth still exists. The volume of agricultural produce in 2020 will be twice as much as in 2010. We pay great attention to the diversification of the national economy. We do not want our economy to be dependent on oil and gas alone. The President has declared his wish to turn oil capital into human capital. The agricultural sector is developing in line with other non-oil sectors of the economy, thus contributing to diversification.

What are the major improvements that have occurred in Azerbaijan’s productivity from an agricultural perspective?

As part of the increased financial support given to the agricultural sector, Agroleasing OJSC was established. Every year, agricultural machinery, technological equipment, and mineral fertilizers are purchased and imported into Azerbaijan by Agroleasing through funds allocated from the state budget and accumulations from Agroleasing’s own operations. These are then provided to farmers and rural entrepreneurs on a concessional basis, and consequently these new technologies and equipment contribute to increased productivity in agriculture. Improved productivity is one of the challenges in the agricultural sector, because land is limited in Azerbaijan. In order to develop livestock production, highly productive breeding cattle are imported from Europe and bred here through artificial insemination. All this ultimately contributes to increased livestock productivity. For the crop production sector, we use high-yielding seeds. All of these activities will enable us to sustain intensive growth in agriculture.

“A large variety of products—particularly fruits, vegetables, garden crops, and their processed parts—are exported from Azerbaijan.”

To what extent does the Ministry provide subsidies for agricultural activities?

Subsidies are provided in several different ways. For example, agricultural producers are exempt from most taxes; they only pay land tax, which is marginal. Apart from this, the President signed a decree in January 2007 regarding state support to agricultural producers. According to this decree, AZN40 per hectare of arable land is provided to all farmers for fuel and lubricants. In addition, AZN40 per hectare of land is provided to rice and wheat producers. Furthermore, the government subsidizes 50% of all mineral fertilizers used, and 50% of the cost of the imported highly productive cattle is covered by the government, with the remainder paid by the farmer over three years. We also provide subsidies in the seed-growing sector. In total, AZN573 million worth of subsidies were given to agricultural producers in 2012.

What role does FDI play within the agricultural sector of Azerbaijan?

International organizations have invested and carried out numerous projects in Azerbaijan’s agricultural sector. There is a state credit agency within our Ministry, which is responsible for the implementation of projects co-financed by the government of the Republic of Azerbaijan and the World Bank. The latter invites other partners to join a project and invest in Azerbaijan. In addition, the International Fund on Agricultural Development (IFAD) is overseeing projects in Azerbaijan. Overall, 10 projects have been initiated during the period from 2003 to 2012, which has contributed to the agricultural development of the country.

What are the medium-term plans for the Ministry?