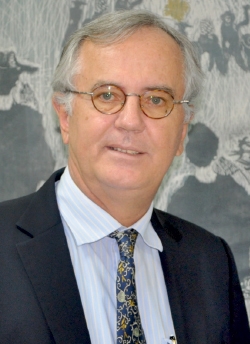 Gero Vaagt holds a degree in Agriculture from the Christian Albrecht University of Kiel and a PhD in Plant Pathology, Plant Protection, and Pesticide Management from the Institute of Pathology in Kiel. Between 1981 and 1998 he worked with the German Technical Cooperation Agency (GTZ) in Costa Rica, Malaysia, and Germany. He has been with the FAO since 1998 and, since 2012, has been the Representative for the Dominican Republic.

Share on:
What are the challenges for the development of the agricultural sector in the country? The Food and Agricultural Organization (FAO) of the UN has a long history of supporting and […]

What are the challenges for the development of the agricultural sector in the country?

The Food and Agricultural Organization (FAO) of the UN has a long history of supporting and strengthening agriculture, although in recent years it has focused more on hunger and hunger education. The Dominican Republic has already reached the Millennium Development goal of halving the number of people experiencing hunger. In 1991 and 1992, more than 30% of Dominicans were under-nourished. For 2013, our figures indicate a figure of 15.6%. At the same time, we have to recognize that the situation has not improved in a number of countries, despite good agricultural conditions and possibilities. We have found an encouraging environment for working here, because the government wants to reduce poverty, which is the other side of the coin of food insecurity. If poverty reduction is part of the country’s development initiatives, it supports and strengthens food security in the country. It is not only a question of having food available, as access and the capacity to manage and be able to buy and use the food are also crucial elements. In the Dominican Republic, we have noted that about 7% of GDP comes from agriculture, and about 14% of employment. In certain areas, production and productivity are lower than in neighboring countries with similar conditions. From the point of view of food security, the major crops are rice and plantains. And in terms of area planted, rice is the main crop in the country. The rice production level could be better as productivity is generally low, because the use of technology is limited and knowledge lacking. We see this as one of the major challenges in agricultural production. In terms of the entire value-added chain, from production to final product, there are not many activities in the Dominican Republic. There are only a few companies producing food items here, and often, primary products are exported. There are many opportunities to correct this and, at the same time, provide more employment and make better use of the natural resources of the country itself.

What are you doing to improve the conditions of small-scale farmers?

Around 70% of the Dominican Republic’s producers are smallholders and are also the majority of the staple food producers of plantains and rice. However, the last agricultural census was taken in 1981, so with the National Bureau of Statistics and the Ministry of Agriculture, the process of launching an agricultural census is underway. Often, farmers do not have land titles, and where a title is lacking, credit is difficult to obtain. Also, we are assisting the National Water Resource Institute in developing a new law for water management, covering issues of water distribution. Similarly, we are working with the Ministry of the Environment, which is responsible for the forestry sector, in order to improve its legal measures so that national forests can be better utilized.

Where are the major technology and equipment requirements in the meat, fish, and crop sub-sectors?

National consumption of fish is low, but this has to do with history, tradition, and also with storage problems. Fish needs to be fresh, or else the know how to treat it is essential, and the transportation of fish was not easy in former times. The National Commission CODOPESCA is working with its members in a number of areas. Recently, we have been conducting a study on Lake Enriquillo, which is expanding and is causing farmers to lose their land. We have observed that there are many crabs today in Lake Enriquillo and we are trying to train some farmers in fishing practices in order to compensate for their loss of land. To this end, we are initiating projects for the selling and packaging of crab meat.

What is next for the Dominican Republic?

Approximately 1.6 million to 1.7 million Dominicans do not get adequate daily food, which is a shame for a country with a per capita GDP rate of $5,600 to $5,800. Poverty has remained at around 50% in rural areas and at about 40% in urban areas, which has not changed over recent years.