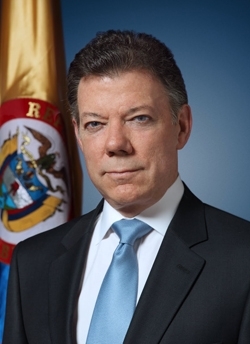 Imagine What Is Possible

Juan Manuel Santos graduated from the Naval School of Cartagena in 1969 and continued in the Colombian Navy, obtaining a BA and graduating as a Naval Cadet. After leaving the Navy, he attended the University of Kansas, graduating in 1973 with a Bachelor’s degree in Economics and Business Administration and went on to receive an MSc in Economic Development from the London School of Economics and another in Law and Diplomacy from the Fletcher School of Law and Diplomacy from Tufts University. He has worked as Chief Executive of the Colombian Coffee Delegation to the International Coffee Organization and Sub-Director of his family-owned newspaper, El Tiempo. Under President César Gaviria he acted as Minister of Foreign Trade. In 2006 he became Minister of Defense, before being elected President in June 2010.

Share on:
"This administration has focused on Colombia’s regions since our first day in office."

TBY talks to Juan Manuel Santos, President of Colombia, on boosting ties across Latin America and making Colombia a top place to do business.

During the Summit of the Americas 2015, you raised several notions of pan-American policymaking on behalf of Colombia based on respect and education. What is your vision for creating greater harmony and equality on the continent through education?

I believe there is a greater conscience throughout the hemisphere of the crucial role that education must play in the development of our nations. It is a common understanding that without education we cannot prosper or have more equal societies; this leads to constructive conversations about common purposes that put some of the old debates behind us. In Latin America specifically we simply haven’t done enough to harness the talents of our citizens and we must cooperate amongst ourselves and with others in order to leap forward. The world isn’t waiting for us to catch up. This spirit was certainly reflected in the most recent Summit. Colombia proposed the creation of an Inter-American Education System that can support governments in formulating policies that will significantly improve the quality of education and increase investments in knowledge, science, and technology. Our proposal was well received at the summit to the extent that the OAS, the Inter-American Development Bank (IADB) and the Latin American Development Bank (CAF) all signed a letter of intent, in which they agreed to promptly put in motion the actions needed to move forward on this initiative.

One of your re-election pledges was to lead the way to accession of the OECD. In what policy areas will convergence with the requirements prove the most challenging, and how do you intend to overcome these challenges?

Colombia has made significant progress across all the policy areas in the accession process and we are optimistic that we will be ready by the end of this year. Obviously there are some policy reforms that tend to be more difficult to carry out than others such as taxes and health because they may require new legislation or broader consensus. Our government has taken on the task of communicating and engaging with all sectors of society and with the Colombian people to explain the long-term benefits of adopting best practices recommended by the OECD. We have found that these efforts have been successful in galvanizing support for most reforms that we believe will make our country more modern, transparent, and innovative.

“This administration has focused on Colombia’s regions since our first day in office.“

One of your domestic strategies for reducing regional discrepancies in productivity, representation, and equality is represented by the President in the Regions initiative. What are the main pillars of this strategy?

This administration has focused on Colombia’s regions since our first day in office. We set about working on reducing poverty, improving education, building new houses, and providing basic services like water and energy to people in areas that had been neglected for decades. But we also understood that Colombia’s regions have enormous economic potential that must be unleashed over the long term. So we have also focused on creating the right conditions for sustainable development and prosperity, for instance by building next-generation highways, bridges, airports, and ports, and connecting every municipality to broadband internet. Through the President in the Regions program I am able to closely follow up on hundreds of different initiatives and be accountable to the Colombian people.

There are many challenges that will need to be addressed the day after a peace agreement is signed. Many of those will take years to resolve, but one particular area will require extraordinary efforts, including the sustainable development of our rural areas and the investments required to create a world-class agro-industrial sector; these are inexorably linked. The conflict has negatively impacted our ability to do both and the social and economic opportunity costs have been staggering. In addition, these are very complex issues that must be dealt with in sensible and smart ways. But on the upside, according to the FAO, Colombia is one of only eight countries in the world that can significantly increase its food production. Most foreigners don’t realize how vast Colombia is territorially; larger than Spain and France put together, so both the challenge and the opportunity are great. We have already begun putting the structures and resources into place that will put us on the right path. We are confident that, in 10 years, Colombia’s economy will be structurally more diversified, not just in terms of agricultural production, but also in high-value exports based on science, technology, and innovation.

Taxes generated from impuesto patrimonio will reach approximately COP8-10 billion annually. How will this tax be distributed and how do you perceive this will impact international investment dynamics in the country?

Last August in my inauguration speech, I put forth three strategic priorities for Colombia over the next decade; a country at peace, with equity, and the most educated nation in Latin America. My job in these four years is to put Colombia on an irreversible path toward these objectives. Our investments in the National Development Plan reflect those priorities. We cannot be a country at peace if there is inequality. Long-term inequality can only be eradicated through education. And a highly educated nation is much less prone to resort to violence in a globalized world. This is a virtuous cycle that will make Colombia an even more attractive place for international investors. If we are already one of the best managed economies in the world and foreign investment is pouring in by the billions without having ended the conflict, one can only imagine what is possible in the Colombia that we want to be by the year 2025.