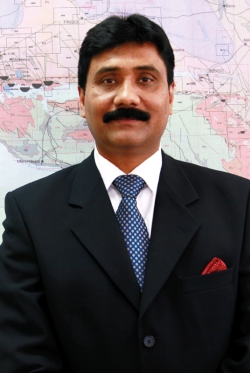 Manoj Gupta was born in 1966 and graduated from the National Institute of Technology in Jamshedpur, India, with a degree in Mechanical Engineering. Prior to assuming his current position, he worked for Tata in India, and has over 22 years of corporate experience in a variety of technical and managerial positions.

How significant is Jindal’s role in supporting local infrastructure development?

As an investor, we do not want to isolate our participation in the field of infrastructure development. Our intention is to support the coal industry so that we can earn money from steel. We look at infrastructure development as an opportunity to maintain the segment of our business lending support to steel operations. If we decide to build a port to facilitate exports, for example, the options are there. What is important is that the government has already started working on these challenges; it is finding that the best way is a multi-user port. We have already invested in coalmines, and we are going to invest in infrastructure development under Mozambican guidelines with an open-access approach. We are still doing a feasibility study in close cooperation with the government of Mozambique for the development of a new rail line along the coast, as well as the construction of a new railway in the north. Some of these lines are already complete.

What is the timeframe to begin work on the supportive infrastructure development?

The timeline we are looking at over the next three to four years is to have sufficient infrastructure to support the production of close to 40 million to 50 million tons of coal. I believe that Mozambique’s potential of exporting up to 100 million tons of coal will not be very far away. I think that over the span of 8 to 10 years it is possible. What is most important is to do the homework. Once you do the proper homework, the actual investment will not take much time.

What level of capacity will the line have to support Jindal?

“We are aiming to export our first coal by the end of 2012, and ramp up in three to four years to a capacity of 3 million tons.”

In terms of the thermal power plant (TPP), to what extent is it necessary to build one?

As far as Jindal is concerned, making steel and generating power are our core businesses. Our intentions when coming into Mozambique were to harness the coal and other resources here. Utilizing those resources has its difficulties, but it is possible. The idea is to use the coking coal for our steel plant. We also want to export high-quality thermal coal as well, but because of infrastructure constraints, there are certain limitations. The cost to transport coal will not make the project viable. So, to make the project more viable one has to use the coal in two ways, instead of transporting it we have decided to have a power plant here as one of our core businesses. When talking about coking coal, which is being used for the making of steel, then costs can be constrained for now. To make the project more viable, our studies show we must build a power plant. We have carried out research, and we have already signed a framework agreement with the government of Mozambique detailing what is going on. When everything is feasible, we will declare our intention to set up the power plant.

What level of exports are you targeting for end-2012?

We are aiming to export our first coal by the end of 2012, and the ramp up will be in three to four years to a capacity of 3 million tons. At the same time, infrastructure development is happening now, which will encourage us to increase the capacity from 10 million to 20 million tons.